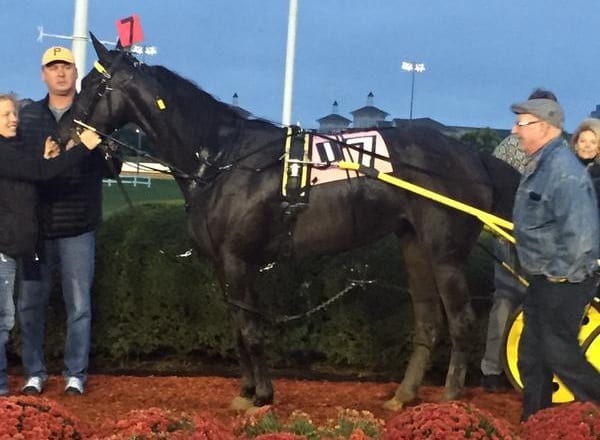 Mission Brief Makes It Look Easy In The Bluegrass

LEXINGTON, KY – You needed to be at the Red Mile early on Saturday night to catch the brilliant Mission Brief in action.

The champion daughter of Muscle Hill opened the slate of Bluegrass Series stakes on a chilly evening that did not produce fast times.

Mission Brief cruised to an easy 4¾ length victory in the $72,000 first division of the Bluegrass Series for three-year-old trotting fillies. She won her fourth in a row since placing second when facing male horses in the Hambletonian. In her current streak, she has bested the competition by 28½ lengths and has only lost twice in 10 starts this season. She accomplished her last tally in a rather tepid time (for her anyway) of 1:55 4/5, closing out the final quarter mile in 28 1/5. Yannick Gingras, her regular driver, really didn’t have to do much.

She is certainly a different horse now from earlier in the season when she was winning but not nearly as smooth gaited.

“In here (at the Red Mile), she’s a lot different,” trainer Ronnie Burke said. “There’s not as much noise and there’s not as much action, so she’s obviously going to calm down a little bit more. Basically all we want to do is get around there without hurting her, just get a mile in her, mission accomplished.”

Burke, who owns Mission Brief with Our Horse Cents Stable, Jerry and Theresa Silva and Weaver Bruscemi, is expected to race again next Saturday in the $300,000 Kentucky Filly Futurity at the Red Mile before heading to Canada for the Breeders Crown eliminations.

John Campbell, driving the Cantab Hall filly for the second consecutive race, shot out quickly from furthest out in the seven hole, then tucked into fourth, holding that position for the opening quarter mile in 29 2/5 and a half in 57 4/5 by pacesetter I’m So Fancy. Campbell tipped out Wild Honey, who moved up to I’m So Fancy and was close to her flank after three-quarters in 1:27 1/5. Turning into the stretch, Wild Honey gained full control and drew away.

She is owned by Christina Takter, Jim and John Fielding and Herb Liverman.
“She’s been just a terrific filly all along for us at two and now at three,” John Fielding said. “She’s not that big, but she’s very, very gutsy and it’s just a thrill to be associated with her.”

She may be headed to the Kentucky Filly Futurity, too, in her final start before the Breeders Crown eliminations.

Wicked Little Minx, driven by Brett Miller for trainer Nancy Johansson, pulled off an upset in the first $62,800 division. The daughter of Rocknroll Hanover, sent postward at just under 5-1, won by a neck over 3-5 favorite Bettor Be Steppin in 1:55 3/5. Bettor Be Steppin had the lead going into the stretch but just couldn’t hold on at the end.

Bedroomconfessions, the 13-10 favorite, won with ease in the second division, also going for $62,800.

Driven by Tim Tetrick for trainer Tony Alagna, Bedroomconfessions trailed the six-horse field early from and then started to make a move on Devil Child, who grabbed the lead after the opening quarter from Happiness and led through three-quarters in 1:26.

Divine Caroline, the even-money favorite in the final $63,800 division, won by 1¾ lengths for driver David Miller in a time of 1:53 2/5. Daut Full placed second, followed by pacesetter Band Of Angels.

The colt by Crazed, driven by Tetrick for Burke, prevailed over The Bank, who claimed the lead after the opening and led through three-quarters in 1:27.

Uncle Lasse started out from the rail, made a move first over up the backstretch and had the lead going into the stretch but was overtaken by Muscle Diamond late in the drive to the wire.

Muscle Diamond, who placed second to Pinkman in last year’s Breeders Crown, was racing for the first time with the diuretic Lasix. He has been lightly raced this year because of a filling in the leg, making only his eighth start and has won four of them. He has earned more than $200,000 and eclipsed $500,000 in career earnings.

In The Arsenal, Split The House Best In Sophomore Male Pace Races

In The Arsenal, the even-money favorite who has been knocking heads with the best three-year-old male pacers, won his $93,000 division by a half length over Rock N’ Roll World. It was a crazy kind of race because Paparazzi Hanover, driven by Gingras, blasted out and set a wicked pace, carving out fractions of 27 4/5, 54 3/5 and 1:23. But he was leg weary heading into the stretch and In The Arsenal, driven by Brian Sears, reeled him in and won by a half length in 1:52 3/5.

In The Arsenal, a son of American Ideal, is nearing $500,000 in earnings this year and has won more than $900,000 in his career. He is owned by White Birch Farm and In The Arsenal Racing.

Split The House, who was purchased privately by Crawford Farms heading into the Little Brown Jug but was scratched from the final when he drew poorly, won the other $92,000 division. Driven by Tim Tetrick, Split The House had to work hard down the stretch coming from behind and drew away once he claimed the lead to prevail by 1½ lengths in 1:53 1/5.