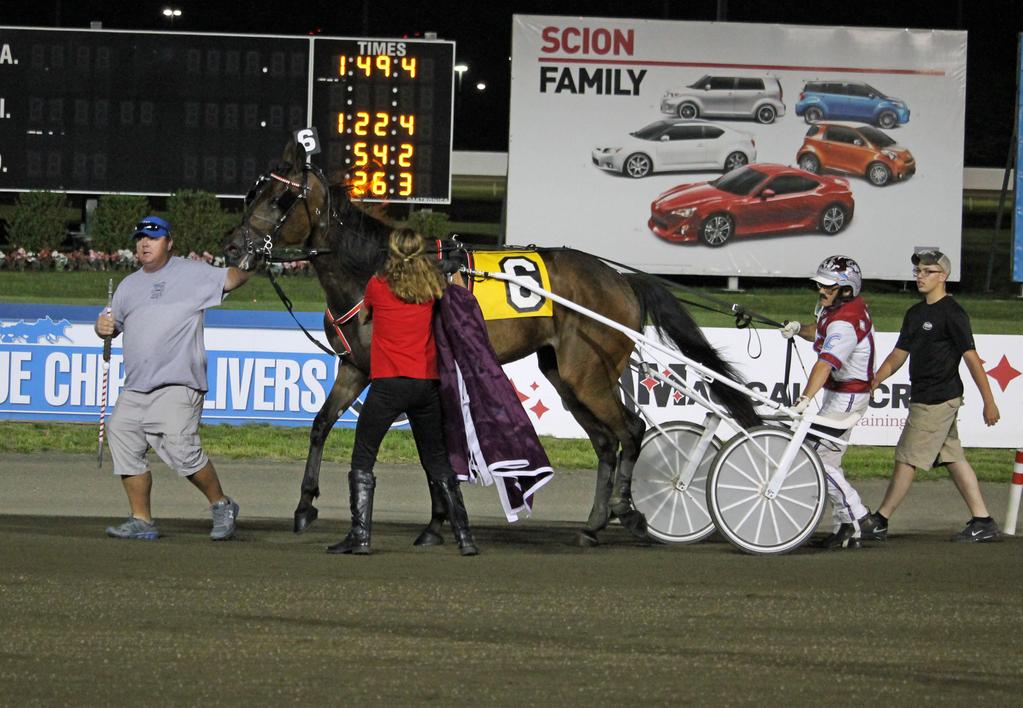 JL Cruzes to a World Record

EAST RUTHERFORD, NJ – JL Cruze just keeps getting better and better and so does his incredible story.

The same horse that was a non-entity last year at 3, won for the 15th time this year from 17 starts and did so in the fastest ever trotting mile in the storied history of the Meadowlands. Holding off a fierce late rally from the mare Shake It Cerry, JL Cruze won last night’s $250,000 Graduate Final at the Meadowlands by a nose in 1:49.4. It was the fastest mile in history by a trotter on a one-mile track.

“You look at Mack Lobell and all the great trotters that have raced over this track and for us to come up here and be the first horse to trot in under 1:50 is unbelievable,” co-owner Bill Dittmar said. “This is from a horse we hoped would be a condition horse and now he does this. It really is a fairy tale. We bought him hoping he would be competitive on the Dover, Chester circuit.”

JL Cruze was a terror during the winter months at the Meadowlands, but winter stakes winners are supposed to be long forgotten by the time the top horses return in the spring. With JL Cruze, he has instead kept right on rolling, seemingly getting better all the time.

He first served notice that he was truly something special when he beat Father Patrick in successive legs of the Graduate series, which is restricted to 4-year-olds. Two weeks later he beat Sebastian K at Pocono Downs and last night he conquered Shake It Cerry. That’s four straight wins over 2014 Dan Patch Award winners.

JL Cruze usually doesn’t win by a lot, and last night was no exception.

With John Campbell again driving, the son of Crazed was third in the early going before brushing to the lead approaching the half. He got there in 54.2 and was in front by 1 1/4 lengths. Father Patrick was the next to pull but it was clear on the backstretch that this was going to be a tough night for him as he was having problems keeping up. That seemed to cement the outcome for JL Cruze but Shake It Cerry had yet to be heard from.

With trainer Jimmy Takter doing the driving, Shake It Cerry closed with a rush and simply ran out of racetrack.

“There’s no doubt about it, he’s just very, very special,” winning trainer Eric Ell said. “He’s had a long year; he’s been racing since January. Yet he just keeps getting better all the time. Everybody knows that he has to get beat sooner or later, when it’s going to be I don’t know. But I hope this fairy tale continues. (The world record) means a lot to me. I’ve been in the business a long time and have trained a lot of horses but nothing like this.”

It was a puzzling effort from Father Patrick, who began his year with a win in the Maxie Lee at Chester, but has now lost three straight. He finished sixth, beaten by six lengths.

He must also be supplemented to the Breeders Crown, and Ell said no decision has been made on that call yet.

He’s also in line to start in the Aug. 8 Cashman, where he will again meet Sebastian K, along with Elitlopp winner Magic Tonight. Ell knows nothing ahead will come easily.

“When we beat Sebastian K, that was his first start back and I know he had to be a little bit short,” he said. “Horses like that are going to be fresh and you have to think our horse has got to be getting tired soon. It’s going to be tough down the road. No doubt about it.”