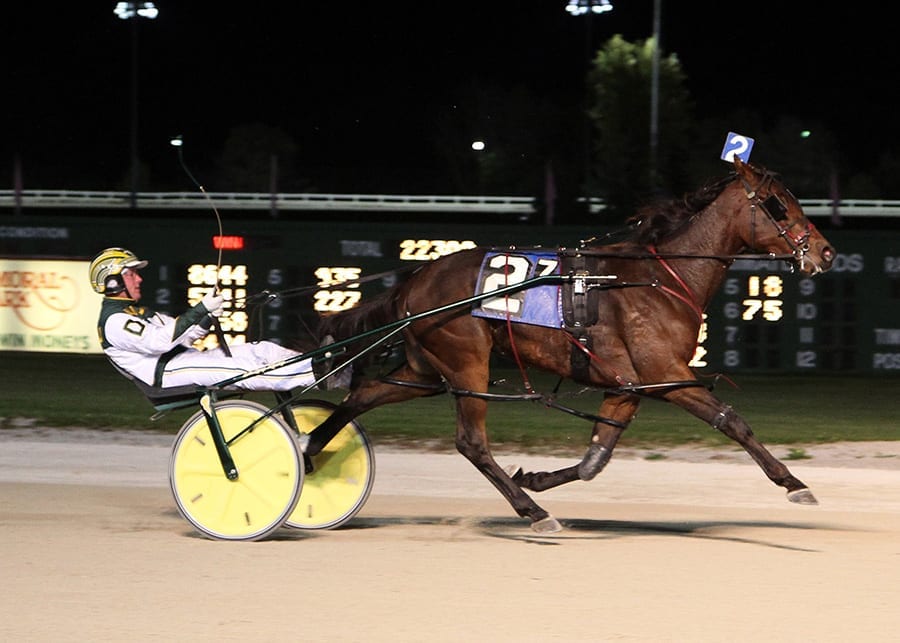 Owners Duane and Connie Roland, and to a certain the world of harness racing, are about the find out about the true ability of Roland N Rock, a three-year-old gelded pacer who has been turning heads in county fairs in Iowa and will now face the best of his division in New Jersey at the Meadowlands.

Undefeated in 18 career starts, Roland N Rock is entered in one of the two $50,000 eliminations of the Crawford Farms Meadowlands Pace Saturday night. Included in his division is Hempt winner Wiggle It Jiggleit, and North America Cup victor Wakizashi Hanover.

Wiggle It Jiggleit had an 11-race career undefeated streak heading into the final of the North America Cup, in which many of the story lines focused on whether the altered son of Mr. Wiggles was truly legit, having faced lesser quality horses. He placed second in the $1 million final to Wakizashi Hanover, another three-year-old gelding who won a division of the North America Cup but whose true ability was still in question going into the race. But Wiggle It Jiggleit rebounded in the Hempt, reclaiming his status as the top three-year-old pacer.

But it’s been that kind of season so far, and now it is time for Roland N Rock to step into the spotlight. It’s a pretty amazing experience for the Rolands, who make their primary living as soy bean and corn farmers on a 1,500-acre spread in Iowa. Horse racing is somewhat of a sidebar, although they both come from families who have been in the horse racing business for four decades.

“How excited are we to go against these horses?” Duane Roland asked in an interview with Harness Racing Update. “We are more excited just that we’re (in the race) and we actually have a horse that’s good enough to enter and be part of the whole Meadowlands Pace experience. This doesn’t happen to people from Iowa or typically from the Midwest. It doesn’t happen very often.”

The Rolands purchased the Cambest mare Hank’s Chip in foal to Rocknroll Hanover for $6,000 at the Perretti Farms Dispersal Sale in Harrisburg two years ago. It seemed like a rather innocuous purchase, given that Hank’s Chip had produced three foals, two of which combined for a total of three wins in 42 career starts and earnings of slightly more than $19,000. Sandwiched in between those foals was one, Sir Globalop Z Tam, who won 16 of 113 starts and $190,239 and set a speed mark of 1:51.1 as a six-year-old.

But nothing could have foretold the incredible story that would result from the mare’s fourth foal. It really has been truly unbelievable. The Rolands figured they could afford to buy a couple of the broodmares at the Perretti dispersal, while also thinking it would be cool to have an Iowa registered foal by Rocknroll Hanover. They also bought a second mare for $9,000, but the results haven’t yielded anything of consequence.

The Rolands raced the horse out of the state twice as a two-year-old, both times in Illinois. He won a minor stakes in Springfield at the Illinois State Fair by a whopping 13¼ lengths with a speed mark of 1:51.2, and wrapped up his first season prevailing in the American National at Balmoral Park, collecting $44,720. Some of that was used to stake him for some big three-year-old races.

Following three races in Iowa, he was entered last week at Historic Track in Goshen, New York, where he won in the slop by 10¼ lengths with John Campbell driving. The Hall of Famer will be behind the lines for the elimination race at the Meadowlands.

“To foal this horse, train it and raced it and get John Campbell to drive, my wife and I are just excited to be here – it’s actually going to happen to us,” Duane says. “What happens, happens. Of course I’d like to win, who wouldn’t? Everybody wants to win. But being here is like a lifelong accomplishment.”

They have never raced a horse at the Big M, now they are about to do it for the first time in one of the signature races at the track.

“It’s something I’ve always wanted to do since I was a little kid and now it’s actually happening, so I’m ecstatic,” he says.

It took 21 hours to ship the horse to Goshen, and then he was pushed in the race, getting parked for a good portion of it, but found that extra gear to win. He has won by an average of more than eight lengths, usually setting the pace or right up close to it.

“I’m excited because I’m going to find out how good he is,” Duane says. “I don’t know how good he is. No one knows or how fast he can go.”

When the Rolands were looking for a driver to commit to the horse, they saw Campbell was available and texted him to see if he was interested and he readily accepted. And now comes the biggest test of the horse’s career.

“He could be good enough,” Duane says. “What if he could actually be one of those horses or at least be in the same caliber?”

All the horse has to do is finish in the top five in his division, which has a field of seven, and he qualifies for the final, so it’s not like it’s all or nothing on Saturday.

“I’m not in the same caliber as these guys driving, that’s why we got Campbell,” he says. “Who better than that to drive your horse and put you in a position to win. I’ve trained him the best I can and I’m just going to let John do the rest.”

Duane says there really isn’t much to the horse; he merely does it on his own.

“You just kind of let up on him, maybe shake the lines at him a little bit and he just goes,” says Roland, who has driven him in most of the races. “After the Springfield race it was quite fun to drive him because he was so much the best I could just let him kind of hang out around the first turn and just take off if I wanted to and he just went. He was so much better than the competition; it really wasn’t that big of a deal. It was a big deal that he was going in 1:58 on training tracks in Iowa and that was as fast as the older horses could go. That’s what got us thinking, ‘Holy cow, we’ve got a really good horse here, so why not supplement him to the American National and face some tougher competition?’ He beat the best two-year-old in Illinois. We couldn’t take him anywhere else because he wasn’t staked, so we just took him home and waited until this year.

“We kind of went with the deal that he made us $40,000 in the American National, so that was kind of our budget (for staking this year). So what’s the best bang for our buck? The Meadowlands Pace eliminations have a higher value than some of these other races. So what are we going to do? Where are we going to go? We had to make sure our crops were planted and I wanted to get our other horses set before we ever left to come east. The North America Cup was just too early to get him ready, so we didn’t stake him to it.

“I wanted to do it myself,” he adds of managing the horse. “I know people were asking, ‘why are you racing him at a fair?’ It’s kind of like doing qualifiers. You can only train him so fast at home, but when you go the fair at least you’ve got the starting gate and some competition and the track’s a little bit better. I know it seems different for the people (in the east).”

They had offers to sell the horse early into his racing season last year, but Connie suggesting holding off until the Springfield race. But the offers were somewhat cautionary taking into the account the horse had a New Jersey sire and there weren’t too many races of that kind should he fail to measure up to that caliber.

“So that kind of hindered people’s plans from wanting to pay up, so to speak, and make a more reasonable offer,” he says. “Had he been New York sired or Pennsylvania sired, people would have been more likely to pay more because they would have a backup plan in case things didn’t go perfectly, which was actually good for us in the end because we wouldn’t be in this position if we had sold him. That would have been bad for me.”

There were offers to buy into the horse, but the Rolands declined.

“We don’t own horses with my parents, my brother, with my cousins because when you get partners you just get problems,” he says. “Everybody has different agendas or different goals or different ideas how to train. We decided we’re just going to go it alone. I hope he performs up to the standard of whatever people have set for him. It’s just like ‘let’s go for it and see what happens.’ It’s exciting, that’s all I can say. We are so thankful to be blessed to have this experience. Not everybody gets to do this.”