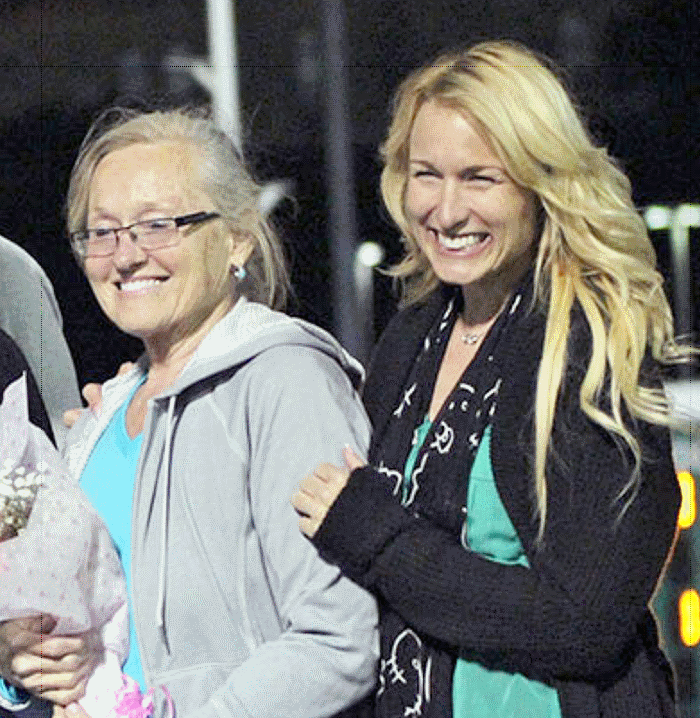 My Mom, My Mentor, My Friend

(It was an emotional win for the family of Joann Looney King in the Pepsi North America Cup. A pioneering female in the sport who doesn’t get many opportunities with top horses, she has done a terrific job with Wakizashi Hanover. A $23,000 yearling buy, he is now arguably the top 3-year-old male pacer in the sport after his win over Wiggle It Jiggleit, a horse many thought was invincible. For her daughter, television personality and harness racing champion Heather Vitale , the win only added to the immense appreciation she has for her mother. Here is their story:)

Perception is a funny thing. It’s just amazing how it changes as we get older. We live our lives questioning what our parents did and judging their decisions, but the minute we’re put in the same situation, we do exactly the same thing as them.

I’m a 70’s baby and while I was growing up it wasn’t really common for households to have a mom who was also juggling a career, and it definitely wasn’t the norm to have a mom who drove and trained harness horses.

When you’re a kid, you believe the world should revolve around your existence. It’s hard to see the sacrifices others are making for you, when hitting the mall on Friday night is the only thing you can think about. When I was younger, I couldn’t understand why I was the only one of my friends doing their homework in the grandstand of the Meadowlands every night. This was so long ago that you had to be 12 years old to get in the gate. I was only 9 or 10 but I practiced my lie so convincingly they let me through.

When I would visit the hospital after a race accident – whether it was a broken pelvis or a shattered elbow – and hear things like “it could’ve been so much worse” it was hard to grasp why my mom would continue to drive horses.

Once there was a time when a judge scratched my mother from the program at the last minute because a woman driving at his track was “a frivolous whim.” I couldn’t help but wonder was all this heartbreak worth it?

When my sister Susan and I would stand at the fence during a post parade, it wasn’t uncommon for us to hear people yell stuff like “go back to the kitchen” at my mother. It really made me angry but, honestly, I think more at her than anyone. You know, because I was just a kid. I wanted my mom just to be like other moms.

In fact, one time I screamed at her, “Why can’t you just have cookies for me when I get off the bus!” (Truth be known it wasn’t something other kids’ moms were doing. It’s something I saw on a commercial. But, that didn’t matter. When you’re a kid and you want to make your parents feel badly, you say what seems required at the time.) The next day there they were…freshly-baked chocolate chip cookies as I walked through the door.

She was dealing with what society didn’t have a name for back then but is so familiar with today – Mommy Guilt. The difficult task of raising well-rounded children, while pursuing your own ventures in the workplace. She was trying her best to “bring home the bacon and fry it up in a pan.” She actually was doing a great job. My sister and I were in sports, had lots of friends and took awesome vacations. But, that’s not what I was focusing on. I had a kid mentality and the behavior to go with it. Meanwhile, she was throwing on a cape every morning juggling the love for her two daughters and the love for her career. Back then I didn’t understand how hard she was trying to make it all balance, but these days I do.

I’ve got two kids of my own now, Wyatt (13) and Trey (7), and do I ever see things in a different light! The pursuit of being Super Woman is no easy task and, unlike my mom, I live in a day and age where it’s common for a woman to be a mommy, as well as a business professional. So, knowing what I do today and going on to see my mother win the North America Cup with Wakizashi Hanover was totally surreal. Even as I write this days later, it still seems dream-like. My mom is 69 and I’ve watched her train horses my entire life. Just like me, she started going to the track when she was a little girl with my grandparents, Elmer and Helen Looney. When a childhood dream, becomes a reality, it can literally be unbelievable.

At Mohawk that night my mom wore my grandfather’s ring, my son, Wyatt, wore his colors and I carried his handkerchief with me. So when my mom says, “This win is for my father,” she’s announcing that to the world with all the love in her heart.

However, it’s also a win for the working moms, isn’t it? It’s a victory for the ladies who are trying to be present with their children and help their kiddos pursue goals, while they themselves are chasing dreams. It’s for the moms who question themselves on a daily basis, if they are making the right decision by starting that business or taking that new job.

As I’ve gotten older and starting walking in my mom’s shoes, I’ve become a very proud daughter. I’m having to make the same kinds of decisions she did and yes, my perspective is certainly different nowadays from when I was roller skating and playing with my Rubik’s cube. While moms out there struggle constantly with work schedules and getting their kids to karate practice on time, there’s peace in knowing that studies show happier moms – whether they’re in the workforce or not – raise happier kids. Period. Women often joke, “I’m turning into my mother!” However, most of us know deep down that’s not such a bad thing, is it?