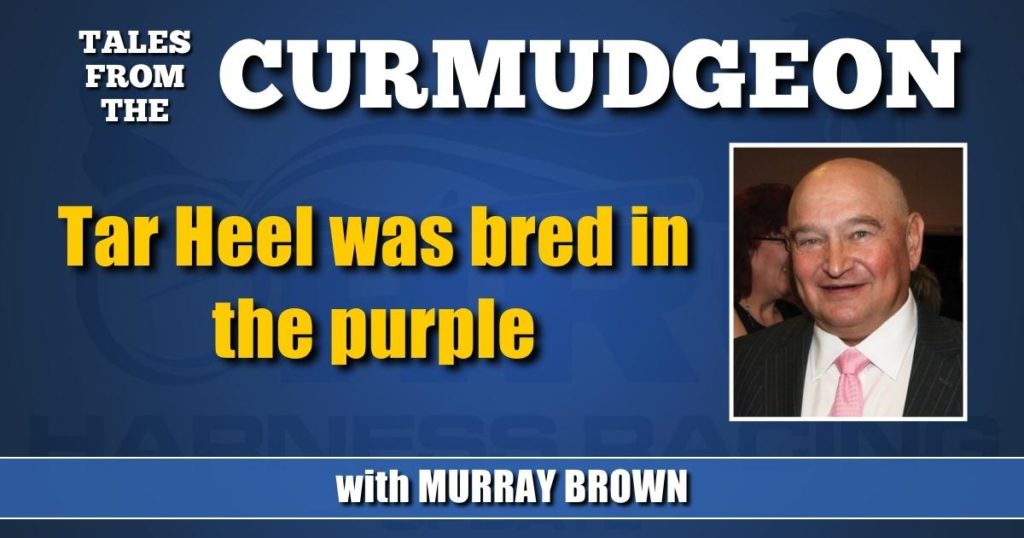 Tar Heel was bred in the purple

John Simpson would sometimes say, “If Tar Heel were a yearling being led into a sales ring today, he likely would not get a single bid. He was coarse boned, back on his knees, had short pasterns, sickle hocks, had a sway back and he had a head that exemplified the term jughead. Other than that, he was a perfect individual.”

One might ask, why did a horse with such questionable conformation turn out to become the great racehorse and sire that he became?

If one were asking this scribe, the answer would likely be, “I don’t know.” If the question was asked after being given some time to mull it over, my response would be pedigree, pedigree and more pedigree. Although not the perfect individual, Tar Heel was bred in the purple.

He was sired by one of the greatest stallions our breed has ever known, Billy Direct, and out of the beautifully-bred Volomite mare Leta Long.

Through history there have been several questions raised about Billy Direct’s, for lack of a better term, “authenticity.”

The first related to his age. My friend and colleague Dean Hoffman wrote a column in this periodical where his birth year was questioned. The monument to him which stands in Tennessee lists his foaling year as 1931. USTA records list it as 1934. He raced as a foal of 1934 and all the records list him as having been foaled that year. Which is right? We will never know for sure.

The second question that followed the horse into his stud career was how “clean” was he when he raced. There were some old timers who claimed that Billy Direct raced on heroin. There were those that said his eyes looked as though they were popping out of his head when he took his world record at The Red Mile in Lexington in 1938. For the purposes of this article, let us say, whether or not he raced “clean,” he was nonetheless a very fast horse.

At the conclusion of his racing career, he was retired to stud at Peninsula farm in northern Ohio. After two years there, he was moved to Hanover Shoe Farms on a lease deal. It was at Hanover where Billy Direct would realize his true greatness as a sire. It is important to understand that Hanover had never previously stood a pacing-bred stallion. Their broodmare band consisted almost entirely of trotting-bred mares, with very few, if any pacers. So, what to do? They bred him to mares with trotting pedigrees of course. One of the few pacing-bred mares he was bred to was Adieu, a sister to the great racehorse and sire Adios. From that mating ensued Evalina Hanover, a fast mare who took a record of 1.59.2, but more importantly became the dam of the great racehorse and sire Bye Bye Byrd.

The vast majority of the mares booked to him were trottingbred. They included the first Little Brown Jug winner Ensign Hanover, another Jug winner Dudley Hanover and a horse that might have been a Jug winner, Direct Rhythm, if he had not had the misfortune of having been foaled the same year as Tar Heel and Solicitor.

Kenny Hamm the outstanding horseman, stallioneer and yearling leader at Hanover took care of Billy Direct. He described the horse as being very kind and highly intelligent. Unfortunately, he was a nervous sort who would sometimes even savage himself. The breed lost a great horse who was just reaching his true potential when he passed from an apparent heart attack at the age of 13.

Tar Heel’s Leta Long was bred and owned by the tobacco magnate W N Reynolds until the latter’s death in 1951.

Delvin Miller, who was the contract trainer for Mr. Reynolds recalled receiving a phone call one late evening that there was a black newborn foal out loose one evening at Mr. Reynolds’ Tanglewood Farm in Winston-Salem, N.C. The young colt was soon gathered up and returned to his mother. That foal was to be named Tar Heel, in honor of the home state of North Carolina. He was the first foal of the Volomite mare Leta Long. He was not only the first, he was also the best foal from his dam who was to become an exceptional producer having four in 2:00, extraordinary production for that era.

Leta Long was a decent race mare, taking a record of 2.03.3/4 on the pace and earning $9,321 in her racing career. She was trained and raced by Miller. John Simpson told this story about her: Miller had her into race at Roosevelt Raceway one evening. She was Miller’s only drive that night. His friend Johnny Simpson was down to drive several. Miller asked Simpson if he would drive her for him. Simpson asked Miller about her. “She’s not much,” was the response. “If you can protect her and race her from a hole you might be able to get a check.” Simpson warmed her up. She felt really good to him. He thought to himself, ‘She might be worth a bet.’ He sent Cy Geers up to the grandstand to bet $200 for him. She ended up winning fairly easily and paying boxcar numbers.

Leta Long, although not a great race filly was exquisitely bred — not to be a pacer, but a trotter. She was by the trotting stallion Volomite who was an equal opportunity sire. He was known for siring extraordinary horses — both trotters and pacers. Her dam the Mr.Mcelwyn mare Rosette was out of a sister to the great racehorse and sire Scotland who stood at historic Walnut Hall Farm alongside Volomite. The immediate maternal family was to produce the good trotters and sires Hickory Smoke and Hickory Pride, and on the pacing end, the noted matron Maggie Counsel, dam of six in 2:00.

Even though Mr. Reynolds was the owner, Miller made all decisions regarding Reynolds’ horse holdings. He decided to breed Leta Long to Billy Direct who was beginning to make waves at Hanover. Little did anybody know that this was going to be Billy Direct’s last season at stud. The horse was destined to pass that same year.

Tar Heel was trained and raced by Miller. He did not always drive him because he had a trio of exceptional colts that year. In addition to Tar Heel, he also had the blindingly fast Solicitor and another good Billy Direct son in Direct Rhythm. Tar Heel was the best of his class at 2 and 3. At 3, he won the greatest of all pacing races the Little Brown Jug, although he might not have been the best horse that day. Del Cameron was driving him and Delvin was behind Solicitor. Tar Heel had won a heat. In the deciding heat, it was thought that his entry mate Solicitor was all set to go by him, but didn’t. They were a betting entry owned and trained by the same people. They raced as a betting entry. If indeed that was the case — no foul, no harm. I was a fly on the wall one evening when Miller was asked the question. He neither confirmed, nor denied the question.

Nearing the conclusion of Tar Heel’s 3-year-old season, Mr. Reynolds died. All his horses were to be dispersed at Harrisburg that fall. The two gems in the consignment were the colts Tar Heel and Solicitor. They were both expected to bring record prices at auction — and they did. Solicitor brought an eye-popping $100,000. Tar Heel was next on the auction block and he exceeded Solicitor’s price bringing an incredible $125,000. Both prices were records for the time. Both horses were purchased by Lawrence B. Sheppard, the owner of Hanover Shoe Farms.

Author’s note. If you happen to be in the presence of Steve Jones of Cameo Hills Farm, ask him to play the sale of Tar Heel at the 1951 Harrisburg Sale for you. He has it recorded on his phone. It was a one-of-a-kind auction experience.Famed auctioneer George Swinebroad was at his very best. I think it took something like 10 minutes to sell just the one horse.

Tar Heel was brought back to race at 4. He did not excel that year, although he did lower his record to 1:57 in a time trial.