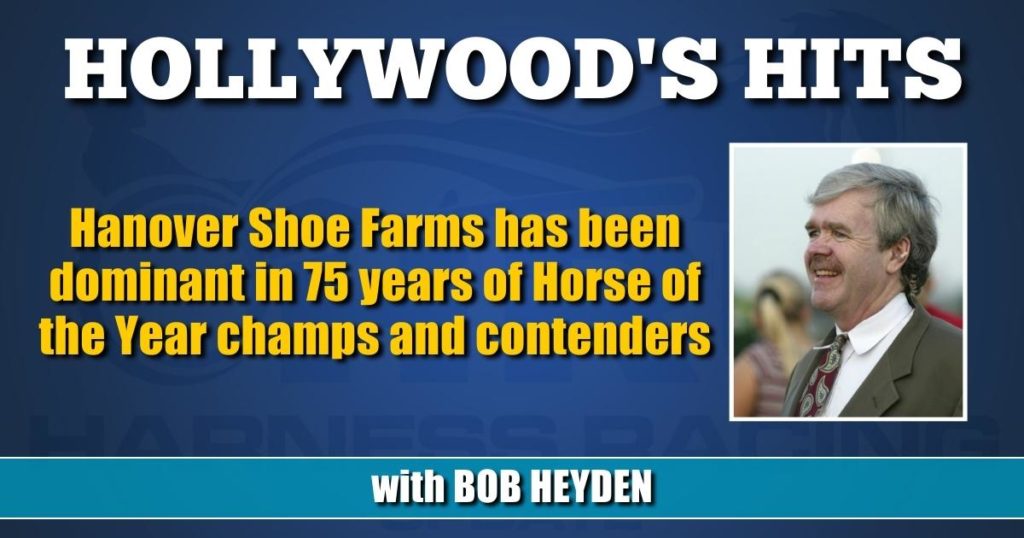 Hanover Shoe Farms, the 2022 Breeder of the Year, also has the presumptive 2022 Horse of the Year (HOY), Bulldog Hanover.

In the 75-year history of the Horse of the Year award, Hanover has played a prominent role. Let’s take a look at Hanover’s connection to the sport’s top annual equine honor.

1948 — Demon Hanover ($67,567), was runner up after taking the Hambletonian that year with amateur driver Harrison Hoyt. By the way, the 1:57.3 mark that year by Rodney was the fastest of the year — trotters or pacers.

1950 — This year was the most pertinent to the future of Hanover Shoe Farms. Look at who was sixth, Stars Pride, and seventh, Tar Heel. Demon Hanover even got into the act again at 10th. Stars Pride was 3-years-old, the Hambletonian runner up and Kentucky Futurity winner. Tar Heel was just 2, but took a season’s best of 2:00.3. That duo would go on to siring exploits at Hanover almost beyond belief.

1956 — Duane Hanover was ninth the year Scott Frost went back-to-back, the first time for any HOY.

1957 — Torpid was the easy winner of the hardware 67-4 over Galophone, but was not a Hanover-sired colt. However, Hanover headman, John Simpson, Sr., was at the controls.

1959 — Third in the voting was Bullet Hanover and tied for fourth with Jamin, was Diller Hanover. Bullet Hanover romped in the 2-year-old pacing colt division 74-9 as did Diller with the 3-year-old open trotters, 73-9.

1960 — Bullet was second in the 1960 season thanks mostly to his Jug score, while Blaze Hanover was seventh.

1963 — Lehigh Hanover was ninth in the balloting after being sixth in 1962. Note: Third in the overall balloting was Meadow Skipper, who would be the most influential HOY sire and grandsire going forward. He was the grandsire of five straight Horses of the Year — Niatross twice, Fan Hanover and Cam Fella twice — from 1979-1983, respectively.

1966 — Bret nails down his three-peat and thus becomes the only one to do so. Little did he know Nevele Pride was planning the same the next three seasons. It’s very rare for a full brother/sister to each get HOY votes the same year, but Bonjour Hanover, a full sister to Bret, was eighth. Even rarer was two Triple Crown winners, same gait, 1-2 in the HOY tally, Bret over Romeo Hanover.

1967 — Romulus Hanover was the top pacer in the balloting and second in HOY voting as Nevele Pride came upon the scene, scoring 108-58 in the final tally.

1969 — Laverne Hanover was fourth in the balloting, but had no problem at all as the top sophomore with a 196-5 trouncing of the competition. Those numbers include both sexes.

1971 — Albatross was a $7,000 yearling and the HOY. Super Bowl went for $20,000 and was tied for fifth. Later they would be the stars at Hanover in tandem. Albatross was and is the only stallion to have three-straight HOY credits with two different horses, with the aforementioned Niatross and Fan Hanover. Super Bowl and his sire Stars Pride have a mind-numbing 14 Hambletonian credits combined.

1972 — Stanley Dancer’s 1-2 punch of Albatross and Super Bowl go 1-2 in the ballot prior to heading off to Hanover for the next quarter century. Romalie Hanover was fifth in the voting.

1973 — Starlark Hanover was third in the HOY balloting won by Sir Dalrae. Delmonica Hanover tied for fifth the year before she won it all.

1978 — Hazel Hanover tied for 10th as a freshman filly, but the following year became the last filly to compete in any Meadowlands Pace final where she finished sixth.

1979 — Chiola Hanover the Trotter of the Year, was fifth overall on the ballot.

1981 — Seahawk Hanover was 10th. Fan Hanover was the first and only Jug winner among the fillies to take the top spot.

2005 — Rocknroll Hanover dominates the proceedings and has no problem garnering the most votes at year’s end.

2007 — Donato Hanover is the easy winner as HOY from the first Crop of Andover Hall a Hanover stallion.

2010 — Rock N Roll Heaven was HOY. A son of Rocknroll Hanover from his first crop, who in turn was from the first crop of Western Ideal, one of the all-time great Hanover stallions.

2017 — HOY Hannelore Hanover leads three other fillies on the ballot.

That likely makes seven horses, and nine HOY trophies for the 2022 Breeder of the Year.

HORSE OF THE YEAR LOOKALIKES

Both went 22-for-33 in their award-winning seasons.

Neither raced for their 3-year-old trainer full-time at 2.

Neither were outstanding at 2.

Both margins were very similar: 119-27 for Abercrombie over Speedy Somolli and 130-21 for Keystone Ore over Keystone Pioneer.

1. A drawing for a trip to see Bulldog Hanover at Seelster Farms.

2. A plaque, Lifetime Achievement Award, honorarium, lifetime pass, anything or all of the above for Jacqueline Ingrassia. She’s still active, yes, but this is long overdue. She’s a harness racing treasure and let’s not wait or procrastinate a moment more.

4. A shout out to two of the most influential sires of 2022, Fred MacDonald and John McCarthy. All four of Fred’s kids have now won year-end awards, with Curtis joining the fun this year. Oh, did I mention that Mark MacDonald won the 2021 Meadowlands Pace and James was 2022 Canadian Driver of the Year? John McCarthy’s three sons have won six million-dollar races in the past three years, two Hambletonians, three Miracle Miles, the Metro and the Mohawk Million.

5. An “In Memoriam” section, 3-4 minutes or so, the kind that they have at the Oscars. Alan Kirschenbaum was mentioned at the Oscars’ In Memoriam a decade back. Too many who are gone deserve the final mention, and we cannot assume that everyone in the room knows of every single passing.