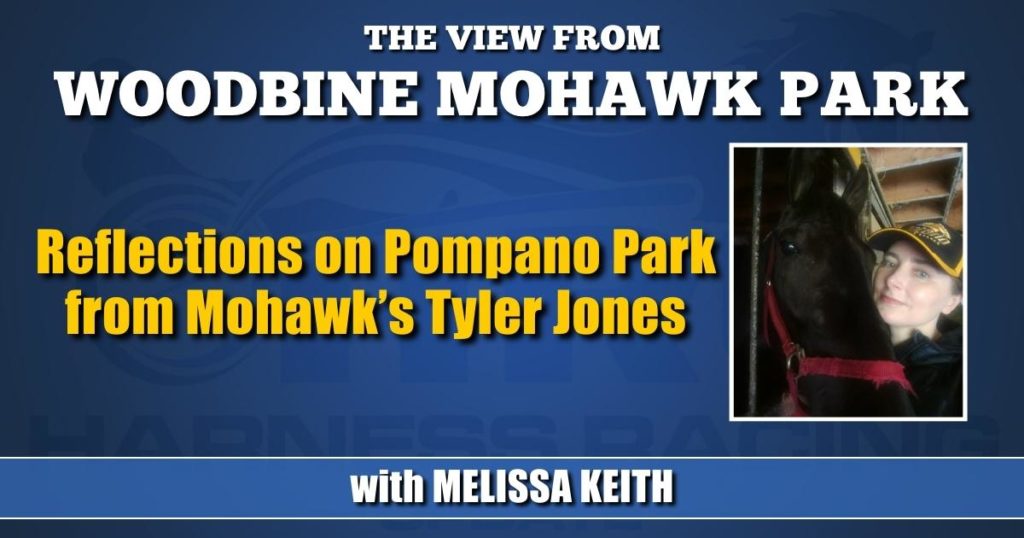 Tyler Jones had several drives last Thursday (Jan. 12) at Woodbine Mohawk Park, but the card ended up canceled due to unexpectedly-warm weather, which had created unsafe track conditions. It struck him as slightly ironic: “For sure the weather is a big difference [from Florida], however it’s been a fairly mild winter thus far racing at Mohawk,” Jones said.

Jones drove two horses (Tour Champion and Ajknight) in the Saturday (Jan. 14) morning WMP qualifiers originally slated for Friday (Jan. 13) morning, which were also moved because of the fluctuating footing.

He was part of the final season of live racing at Pompano Park, which began on Oct. 1, 2021 and concluded on April 17, 2022. In between, there was five months’ worth of relief for drivers looking to avoid freezing temperatures. Some, like Hall of Fame driver Wally Hennessey, trainer John Hallett, and trainer/driver Marcel Barrieau, had long ago made the choice to leave Canada to race at North America’s southernmost harness track.

Back in March 2020, John Hallett looked back upon how he ended up at Pompano.

“I was working for [late trainer/driver] Mike [MacDonald], and he did give me some drives. I actually got in an accident the following January in Montreal. When that happened, I had metal put in my hand, so the following fall comes and Wally [Hennessey] was in Ottawa driving. He asked me, ‘How’s your hand?’ And I said, ‘It’s not great.’ So he said, ‘Well, come to Florida.’ I went and packed my stuff that night, and went to Saratoga with him and then to Florida. I’ve been here now 32 years.”

The week before Pompano’s final card, Marcel Barrieau reflected on the future for himself and other veteran horsemen based there.

“A lot of fellas, if they’re getting up in age too, for them, they’ve got no plans yet. They don’t know what’s going to happen here in the summer, and some of them said they’re going to retire.”

It wasn’t an idle threat. Past Pompano driving champion Kevin Wallis announced his retirement after winning with Latest Attraction on Nov. 1, 2022 at The Downs at Mohegan Sun Pocono.

Barrieau had predicted the talented colony at Pompano would disperse to other tracks around North America.

“They’re going to go back, some to Canada. Wally [Hennessey] is going to go for the summer months at Tioga and Saratoga, and he said for the first time since he started driving, he’s not going to drive [at a pari-mutuel track] in the wintertime… And that’s just one case. A whole bunch of them have been [at Pompano] for like 30 years. Wally himself, he’s been here for 37 years, I think. Yeah, he left [Canada] in ‘86; I left in ‘84 from Saint John [New Brunswick, Canada].”

He also handled all driving duties for Tactical Planner (2, 1:57.2s; $47,744), the 2-year-old trotting filly he co-owns with Andrea Lea Racingstables Inc. The Tactical Landing—Dress to Impress daughter broke her maiden at 67-1 odds in the $62,790 (U.S.) Pure Ivory final at WMP. She even made it into the $600,000 (US) Breeders Crown final, where a miscue took her out of contention in her driver’s Crown debut.

When Jones first went down to the Sunshine State, full-time driving wasn’t on his mind.

“Initially, I went to Florida to train yearlings with my dad [Dustin Jones], in November of 2021. The plan was to train with my dad and try and get a drive or a couple drives at Pompano Park. I was in Florida a couple weeks before I had my first drive,” the Sherbrooke, QC native told HRU.

Woodbine Mohawk Park is still comparatively balmy for the 29-year-old driver who wintered at Rideau Carleton Raceway near Ottawa, ON in 2020. His first-ever licensed drives were a pair of Flamboro Downs qualifiers on Dec. 10, 2015. What matters most to him is the heated rivalries on the track, not warm weather, although he found both last year, in his strongest season to date: 50 victories from 740 pari-mutuel drives, with $881,488 in purse winnings.

“It’s very hard to compare Mohawk and Pompano, they are two completely different circuits, but they are both premier circuits. So everything about Pompano helped me prepare for racing consistently at Mohawk,” said Jones, adding with a laugh that it’s drivers, not horses, who show more dislike for the Canadian winters.

“I think horses are pretty resilient and adaptable animals. Once they get used to it, I don’t see how weather bothers them, except for something drastic or irregular like a snow storm or lots of rain. As for me driving, all you can do is dress appropriately, and I try not to complain.”

Even during a warm January up north, the first year without Pompano Park leaves a void for Jones and others who loved the place. “I think racing in Florida during the winter months is a staple in horse racing,” Jones told HRU. “It’s very disappointing that Pompano is no longer. It would definitely be great if something was reinstated or something new was created. It would have my support and I’d do what I could to help.”

In late 2022, Wally Hennessey and other familiar names took part in the non-wagering stakes races at Sunshine Meadows Equestrian Village in Delray Beach, FL, sponsored by the Florida Standardbred Breeders and Owners Association. Although Jones could have picked up a few such drives and worked at a training centre there, he opted to remain at Woodbine Mohawk Park, where he is currently 12th in the drivers’ standings. He was listed on five horses Saturday night (January 14) at Mohawk, among them the R. Dustin Jones trainee Petipou (p, 4, 1:53.3s; $41,660), owned by Litwin Racing Team, Westmount, QC.

“Going to Florida versus staying in Ontario was a career decision that my dad and I discussed throughout the summer and into the fall [of 2022]. But without Pompano, it made it a lot easier for me to stay. I want to become a great driver and therefore need to continue working on my craft, so staying in Ontario was the right decision.”

Jones had previously expressed gratitude for Pompano’s special place in his driving career, allowing him to regularly go behind the gate against “guys that have thousands of wins, while I only have under 1,500 career starts… driving every night against them, and getting multiple drives on a card.”

Looking back now, he considers himself fortunate to be fitting in well at Woodbine Mohawk Park, at a young-enough age to make his mark. “It’s a very competitive circuit, but being top 10 in the standings is the goal I’ve set for myself.”