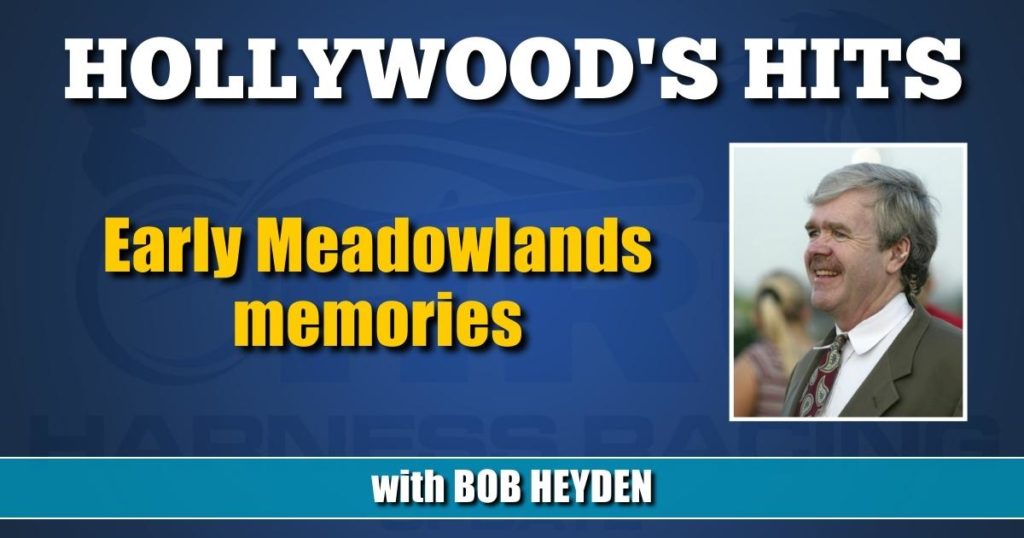 With the original grandstand now being demolished, we look back to the very beginning of The Big M.

It’s coming down folks. The original grandstand building we knew as the Meadowlands is being demolished. It operated from 1976 through 2011 and then until the new building came up across the way. Here’s 20 things that happened the first four nights of racing at The Meadowlands in September 1976 in the first 40 races:

2. Jim Larente and Walter Marks shared the driving lead after night one with two wins each.

3. Here are the first four night’s attendances and handles (Note the drop-off from night one to night two-and then the recovery):

6. The first disqualification? Don Pierce and Split Decision from 2nd to 10th in the finale on night two.

10. The 1976 Horse of the Year Keystone Ore did not race at the Meadowlands in 1976. The only time a HOY has not competed that same year at The Meadowlands.

11. Who had the most drives on opening night? Lew Williams with seven.

12. Overtrick was the leading sire on opening night with three winners: Fashion Trick (the first female to win at The Big M and later the dam of Falcon Seelster), Andy Lobell and Coaches Dream.

15. A 1:55.3 mile by Rambling Willie was the track standard set in the premier on opening night. It would be 24 days until the very first ever 1:55 mile was recorded in New Jersey by Young Quinn.

16. The busiest Meadowlands horse of the 1970s (most starts) was second in the opener — Napal Dew for Greg Wright, Sr.

18. Oddly, Ted Wing did not win in the first 40 races. He almost was the first repeat leading driver in 1978 winning the title just one back in 1977 of Benny The Whip Webster.

19. Oil Burner did win at the Meadowlands, but on the Labor Day card that came on day five in The Oliver Wendell Holmes. He was, along with Tarport Hap and Whata Baron, the three or four biggest names to race at The Meadowlands in their first three seasons.

20. In year one there was no John Campbell and no Bill O’Donnell. Campbell would make it to New Jersey in 1978 and won 23 races. O’Donnell’s feet went into the water first in 1979. Together they won every Meadowlands driving title in the 1980s (Campbell with 6, O’Donnell with 4).