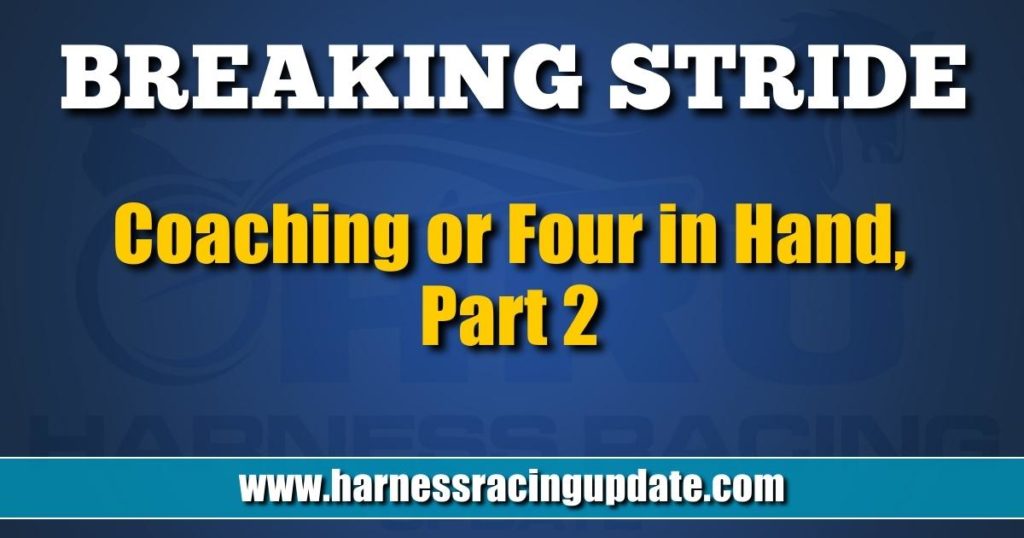 Coaching or Four in Hand, Part 2

To continue from last week, Coaching, often referred to as Four in Hand, was a sport where enthusiasts drove stagecoaches along historic roads with specific destinations approximately 15 miles apart. The burgeoning sport mimicked the early mail runs in England. During the gilded age, the European pastime traveled across the Atlantic to the United States, where the nostalgic activity evolved into a sport for the wealthy.

Adventurous and well-dressed passengers accompanied the whip, or coach driver, on competitive drives over rudimentary roads in a rather uncomfortable carriage powered by four trotting horses. The two types of open-air vehicles, Road Coaches and the slightly smaller Park Drag, had seating outside, with the whip (driver) sitting in the elevated right front seat while usually the whip’s wife or a relative took up the “box seat” on the left.

The driver, usually the owner, was responsible for maintaining their coach, stabling, and caring for their trotting horses. The coach roof had room for 10 paying passengers, and it also had accommodations at the rear for two footmen — paid staff along on the journey to assist passengers on and off the coach who maintained the team of horses when the whip stepped away from the coach. The participants established strict rules governing drivers, horses, and vehicles.

And not merely men, high society women formed clubs of their own. Often, female whips, demonstrated their abilities at their Newport summer estates. Four in Hand became an essential feature of the summer social scene. Driving a team to racetracks for important race cards, parading around the track, and pulling the carriages to the infield was quite the event.

People have an ingrained sense of competition. Prisoners in a cell will race cockroaches or wager on which ant crawls out of a chalked circle first. Seamen will wager on the hour of the day the rain will arrive. The owners of Four in Hand horses and coaches were no different. They found several ways of competing.

Speed and completing the route in a record time was worthy of a wager for the Coaching crowd, but other competitions were devised. How quickly could teams of horses be changed (like a car racing pit stop) and how much profit could a coach earn from paying customers over a season? Perfection in running a route (deductions for early or late arrival) were on the sporting table. Another unique competition for these wealthy people was how much net profit they could earn in the long run after selling their horses and vehicles, much like an owner in our sport could compete in buying, training, and dispersal at the end of the year.

In the 1860s, a group of gentlemen from America caught the coaching fever and began to take lessons from the finest drivers remaining from the Royal Mail routes. In 1869, one of these gentlemen, W.G. Tiffany, began having coaches constructed for the London to Brighton Road, a favorite road of the English coaching class. Back in America, August Belmont and a group of wealthy New York friends organized themselves into the “Four-in-Hand Club” to drive their Coaches from Jerome Park to various horse races.

Participants followed strict rules, dress, and manners. What began as a pastime evolved into a sport when Fairman Rogers created rules and standards. Fairman was a professor of civil engineering at the University of Pennsylvania who fell under the spell of Coaching. Rogers brought the precision of engineering and transformed the hobby into a popular sport that “reined” in America from 1875 to 1915.

“By maintaining no standard lower than perfection in the humblest details of the coach, of harness, of driving, he elevated what is supposed to be merely the pastime of luxurious ease into the dignity of an art worth respect.”

Due to the expenses involved, only the wealthiest practiced the sport of Coaching. Still, the masses appreciated and enjoyed watching the famous Coaching participants, both men and women, and the beautiful horses. The sport snowballed when young Alfred Vanderbilt grabbed the reins. He caught the coaching bug as a young man and carried this sport on his shoulders until his death.

As a college undergraduate, Alfred Vanderbilt listed Four-in-Hand driving as his favorite sport. Then, at his Oakland Farm, in Newport, RI, he built the most extensive private riding ring in the world, expansive enough to host a polo match. Oakland Farm had a large observation deck where 3,000 people could watch his teams of horses practice. In addition, there was a trophy room, billiard hall, lounging area, squash and tennis courses, and a marble-tiled swimming pool with plunge baths on all sides fed by a statue of Neptune with water flowing from an open mouth.

In 1906, Alfred Gwynne Vanderbilt drove his coach, Venture, from the Victoria Hotel, London, England, on his first trial along Brighton Road. Alfred and his party received an ovation along the entire route. Vanderbilt said that that day was the most incredible day of his life, and he returned to later establish regular daily runs from Victoria Hotel in London to the Metropole Hotel in Brighton. Shipping horses and coaches back and forth from America to England became an annual event.

Read this newspaper account, pay your one-pound fare, and hop aboard The Venture.

There were eight changes of horses on the way, the last being at Pyecombe where the company adjourned for tea at the Plough. Alfred Vanderbilt occupied the box seat dressed in a grey frock coat and grey top hat. Guard Godden wore the Venture uniform of a single-breasted frock coat of French grey with maroon cuffs, collar and lappets, black gaiters, boots, and a beaver hat.

When the Venture reached Preston Park, Vanderbilt found the road lined with enthusiastic Sussex and Brighton folk eager to see the young sportsman. They cheered when they glimpsed the coach and ‘spanking greys,’ children threw flowers, and pretty girls smiled and blew kisses. This continued all the way to the Metropole and Vanderbilt will never forget the enthusiastic reception as the Venture sped along King’s Road. Godden was observed playing the 100-year-old bugle with all his old skill.

Vanderbilt’s handsome appearance and well-cut coaching attire appealed to the ladies. One young female passenger in the coach even had the temerity to gently extract his handkerchief from his back pocket while he was engaged in guiding his horses and kept it as a souvenir. This was no ordinary cotton square, but a fine silk handkerchief decorated with images of horses. Of course, Vanderbilt was aware of what was happening but allowed it just the same.

Vanderbilt’s many fans would wait patiently by the roadside when his coach was due, and he acknowledged them with a wave of his hat or whip. There was one old woman who was a devoted fan and never missed the opportunity of waving to Vanderbilt; she had been the beauty of her village in her youth and was known as Belle of Ewell.

Vanderbilt ran his coaches for a six-week period from May to June, working from Tuesday to Friday; for the remainder of the weeks, he handed over the reins to his friend Mr. Van der Host Kosch.

Next Week – The Pinnacle and Shocking Fall of a sport.