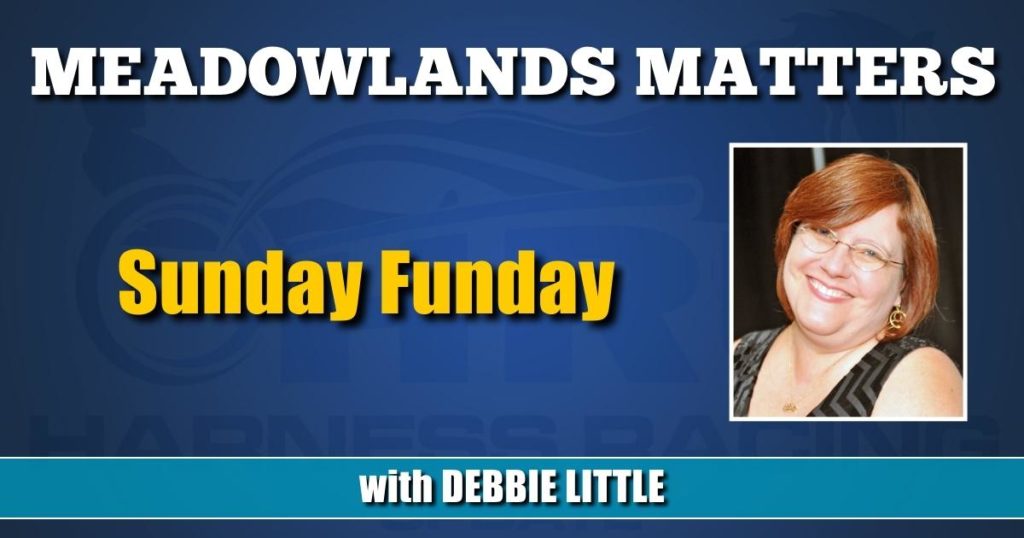 The Big M is experimenting with a couple of Sunday afternoon cards in January.

Ask and you shall receive.

For the first time since May of 2016, The Meadowlands will be racing on Sunday afternoons, January 22 and 29, to be specific.

“The reason I wanted to try a couple of Sundays is I’ve had a lot of customers say things to me about Sunday afternoons where I’ve never really had anyone say anything about Thursday evenings,” said Meadowlands’ chief operating officer/general manager Jason Settlemoir.

“Jeff finally relented and said ‘Okay, try Sunday afternoons,’” said Settlemoir. “Quite honestly, I’ve always wanted to try Sunday afternoons. I think they’ll be better than Thursday evenings. And I wanted to be able to try different things with food and beverage. That’s why we’re doing the brunch. And I’m going to make my famous Bloody Marys, so that’ll be fun.”

The Sunday brunch buffet, that will include Settlemoir’s spicy Bloody Mary, kicks off at 11:30 a.m. with post time for the special race cards at 12:30 p.m.

Race secretary Scott Warren has been dealing with a healthy entry box, resulting in 14-race cards every Friday and Saturday night since the end of the championship meet on Hambletonian Day. The two Thursday night cards, that took place on Sept. 1 and Dec. 1, each had nine races.

It’s unclear at this point how many races will comprise each individual race card on the Friday and Saturday nights and Sunday afternoons, but should the box continue to be supported in the same fashion that it recently has been, the aim is to have 36 races over the three-day weekends.

Warren had 465 horses drop in last week, which resulted in 28 full 10-horse fields prior to scratches, with the same full fields scheduled for this weekend.

Many factors contribute to the current plethora of horses, including, but not limited to, Pompano Park being permanently closed and many neighboring tracks not being open yet this year.

Yonkers Raceway is scheduled to return from hiatus on Monday, Jan. 16, and therefore drew for the 16th and ١٧th on Wednesday, Jan. ١١.

Warren conducted The Meadowlands’ regular weekly double draw for Friday and Saturday this week and still had 445 horses drop in, even with Yonkers doing their draw the next day.

“For the same week a year ago, we had 313 in the box and Yonkers started a week earlier,” said Warren. “I think we’ll be OK.”

With The Meadowlands having to cancel on New Year’s Eve after one race with unsafe racing conditions due to horrendous fog, the regular competition cycle for some horses has been thrown out of whack and they’re still trying to catch up.

Full fields contributed to a $7,057,927 Big M weekend at the windows on Jan. 6-7. In all of 2022, the track only hit or bested the $7-million mark twice, on Meadowlands Pace weekend and Hambletonian weekend. As a point of clarity, the Hambletonian Day card itself brought in over $7 million.

Warren also pointed out that The Meadowlands has close to 50 horses in to qualify this week. Ten of which made their last start outside of North America.

If live afternoon harness racing and brunch isn’t enough on its own to entice people to come to The Big M, there’s the added attraction of the NFL.

Afternoon playoff games are scheduled for both Jan. 22 and 29, which were part of the equation for Settlemoir.

“On Thursday nights, it’s tough to get people here and I just thought we could try Sunday afternoons and see if we can spark a little interest,” said Settlemoir.

GET YOUR PROGRAM HERE

For the month of January, anyone attending the races on Friday nights can pick up a free Meadowlands’ program, starting at 5 p.m.