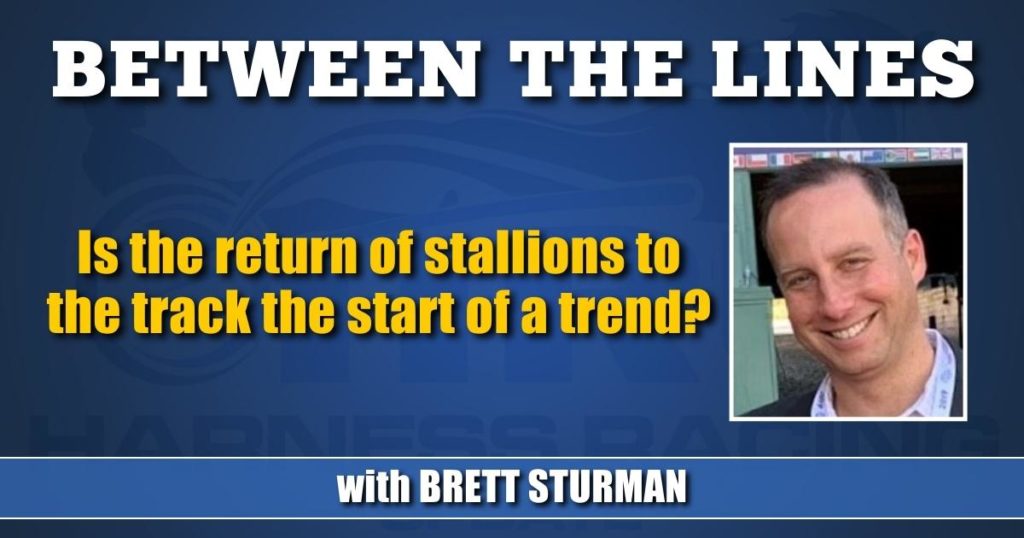 Is the return of stallions to the track the start of a trend?

This past month has seen the return to the track of two stallions, both prominent former racehorses. A Breeders Crown winner and 3-year-old standout in 2016, Racing Hill first returned in a qualifier in December, and the O’Brien award-winning 2-year-old from 2018 Stag Party made his pari-mutuel return last week. Now age 10, Racing Hill will have a 7-year gap in between starts when he goes into an actual race, and Stag Party who is now 7 years of age, showed just over a three-year gap when he raced last week at the Meadowlands.

Though horses in these instances returning to the races following time away at stud is certainly still the exception rather than the norm, perhaps what we’re seeing is the start of a growing trend. These two horses immediately followed Jimmy Freight as another top performing racehorse who returned to the track after a period of being away as a sire. In the case of Jimmy Freight, his time away from the track was much shorter than Racing Hill and Stag Party – and his reasons for returning were different as well – but it shows there is reason for lesser hesitancy in bringing horses back into training than had been prior.

If horses can safely and ethically transition back into their first career as a racehorse and race somewhat relative to their former capabilities adjusted for age, then why not. If anything, it continues to speak to the durability and resilience of the standardbred breed.

In the case of Jimmy Freight and even going back a few years further to the 2012 Hambletonian winner Market Share as another example, fertility issues ultimately proved as reasons to bring those horses back to the track. But in other instances, it may simply be a matter of economics, which was the case for Stag Party.

Casie Coleman trained Stag Party when he raced in his career through ages 2 and 3 and remains part of the ownership group today. In explaining the thought process for what led to Stag Party’s return, Coleman said, “His oldest foals just turned 2 so they’re in training now. They look good and I’m hearing good reviews, but the thing is that he hasn’t gotten that good of a chance to breed a lot of mares, especially this past year. The first year wasn’t terrible at how many mares he bred, but that number has declined and last year he didn’t breed that many at all.”

This past year at Harrisburg, yearlings for Stag Party averaged $15,000. That number may not seem awful, but as a reflection of the small number of mares he bred, there were only a total of six offerings. For Coleman, she noted that this is the first time she’s been part of bringing a horse back into racing that had been retired to stud.

“He’s going to have three or four crops on the ground and people are going to wait and see how those horses race. This year at stud would have been very difficult because the mares will go to all the new sires coming up, and we’ll have to wait and see how his foals do on the track. He was always a sound horse, and it was Eric Cherry who is a part-owner on him, that also suggested that we put him back into training. I said I’ll go along for the ride with whatever decisions the group wanted to make, and so we put him back into racing and we’ll see what happens.”

Maybe it’s still too early to declare Racing Hill and Stag Party returning on the heels of Jimmy Freight returning as a trend, but what is becoming more common is the concept here in North America of horses showing that they can both breed and race at the same time.

In the past couple of seasons, Bulldog Hanover, Catch The Fire and Cattlewash come to mind as horses that have conducted full breeding seasons and then raced successfully. In 2022, in addition to all his on-track accolades that now belong in harness racing lore, Bulldog Hanover bred 79 mares. In 2021, Catch The Fire bred 86 mares – the same year that he won the Sam McKee Memorial and Dan Patch Invitational in back-to-back races. Ditto for Cattlewash, who in 2021 stood for a breeding season and nearly concurrently won the Graduate, William Haughton and was runner-up in the Breeders Crown.

As these horses show they’re able to perform double duty as a stallion and racehorse or are able to resume their career on-track after (even extended) periods away, it could lead others to follow suit. Not every horse will necessarily make a great stallion, and the economics of harness racing still certainly allow for different fits to maximize different revenue streams for each horse. It also allows for the horse to go back to doing perhaps what it’s actually happiest doing.

If things don’t pan out as intended for any of the horses either performing double duty or returning back to the track, you’d think that because of the higher profile nature of them, that these horses would be retired gracefully (such was the case with Market Share after a brief attempt to return with him as a gelding) rather than what is seen in plenty of other former warhorses now toiling around in lower levels throughout smaller racing circles.

The return of these former stars will be watched closely, as how they perform may influence others in their decisions to retire, race or stand their horses, or both.