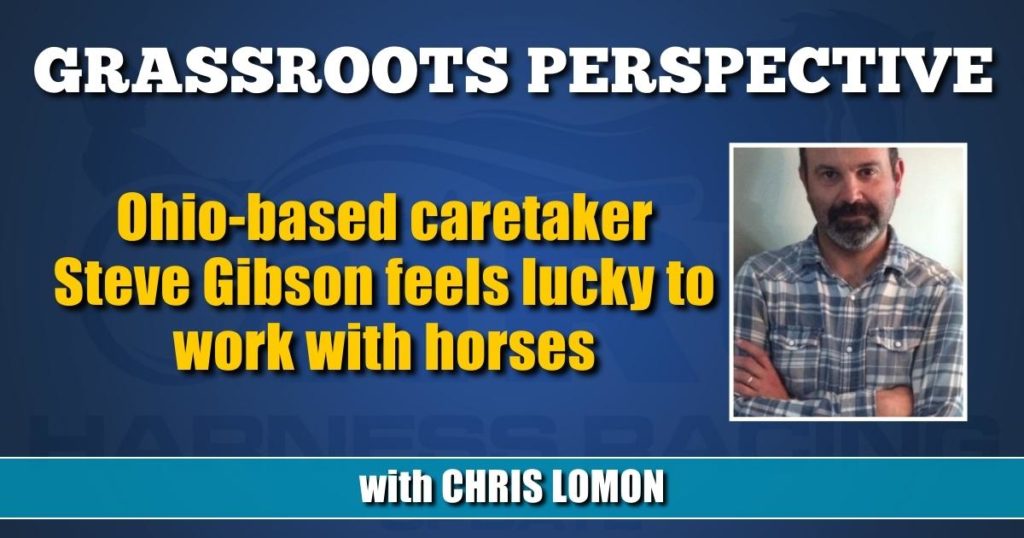 Steve Gibson’s current clientele includes a “Queen” and a “Princess,” which is only fitting considering the racing royalty he’s worked with over the years.

The 2-year-old trotting fillies, Little Bit of Fran, and Check Worthy, have yet to race, but the pair is already receiving gold-standard care from their doting groom.

“I’m really excited about these two babies,” said Gibson, who calls Mechanicsburg, OH, home. “I call Little Bit of Fran ‘Queen’ and Check Worthy is ‘Princess.’ They are two of my favorite ones. I work with them and get them ready every day. One girl who cleans stalls, she always gets on me for spoiling them. I go in and clean ‘Frannie’s’ stall and do whatever, but when she goes in, she says ‘Frannie’ tries to kick at her. She said, ‘You’ve got them spoiled. They don’t want anyone in there but you.’ I guess I do spoil them.”

Chosen as the Ohio Harness Horsemen’s Association Outstanding Groom for 2021, Gibson, who has worked the past 14 years in the barn of trainer Kim Dailey, has taken care of some of the sport’s most distinguished pacers and trotters.

That list would include multiple stakes winners and champions Test of Faith, When Dovescry and Allywag Hanover.

“When those opportunities came, I was so honored. I do my best to make sure every horse is cared for 100 per cent, and it was no different with these horses. It meant a lot to me that the trainers respected me enough to look after them ahead of big races. These are very talented animals, and I appreciated the chance I had to spend with them.”

Gibson has a long association with horses and horse racing dating back to his childhood years.

After he finished high school, Gibson began working as a groom for Eric and Seldon Ledford.

It was an ideal place to launch his own career.

“I worked with them for about 12 years, before they went out east. I was with them when they went to Chicago, Indiana, but when they made the decision to go back to Chicago, I really didn’t want to go back. I ended up meeting a trainer by the name of Gary Budahn from Indiana. I ended up working with him for quite a while. I went to California with him, and it ended up being a pretty fun ride with him. Going out to California was amazing. Right after Hoosier closed, back then it was around October, he would give his horses a couple months off and at the start of the year, he would send them to Del Mar to train and then they would race at Sacramento.”

Although he enjoyed the opportunity to experience racing in different states and locales, Gibson began to miss the familiar surroundings of home.

It was around 15 years ago when he made the decision to return to the Buckeye State.

“I missed my family and I wanted to come back to Ohio. I ended up finding work with a trainer for a little bit before I landed a job with Kim and Bill Dailey. I’ve been there ever since.”

It’s a place, offered Gibson, that feels just like home.

He’s had the chance to work closely with several talented types over the years, a list that includes a well-traveled trotter who earned $377,090 over a career that yielded 30 wins and 87 top-three finishes from 202 starts.

“This horse, he is one of my favorite horses that I ever took care of. Kathy Ratcliff and Jerry Zosel bred and raced him. I had this horse ever since he was a baby. I don’t know what it was, but there was just something about him. He was special. I called him “Spider,” and we just connected right away.”

There have been others.

“Each one is memorable in their own way, but there are some that you recall more. I took care of Rose Run Spanky when he was 2 and won a Sires Stakes championship. Mystical Treasure, she set a track record at Scioto Downs, in 1:49.4. Rockathon, when he was 3, he was second in a Sires Stakes at Scioto, and he won at Delaware. When Bill passed away in May 2018, Kim and I raced Rockathon during his 3-year-old season and he ended up finishing second to Lather Up in the [$275,000] Ohio Sires Stakes final at Scioto. That was a pretty big moment.”

Win or lose, Gibson, the last of the Bill Dailey Stable grooms, can’t envision doing anything else.

It’s a demanding life, but the rewards far outweigh the sacrifices that come with the role and responsibilities.

“You have to love it. Some people understand it, some people don’t. It’s seven days a week. When I was travelling, I missed a lot of family stuff, but moving back home and working for Bill and Kim – they took me in as family – so I’ve been blessed. And to be able to work with these horses is the greatest thing. Breaking them as babies, seeing them progress and then making it to the races, it always is that same feeling of pride and happiness to see them do that. You train them down, then it’s the first qualifier and then you see them race… that’s what I love about my job. You see all that hard work and it makes you realize you accomplished something.”

For Gibson, there is always something to look forward to every morning he walks into the barn.

Although the duties he’s tasked with him remain the same, each day is different from the next, something Gibson is reminded of each day he makes the drive to work.

“Being around the horse is the greatest feeling. Especially when you see the babies. From one day to the next, they are going to be doing something different. We are pretty lucky to have some really nice young horses, so it will be nice to be able to help them along their journey to the races.”

When he’s not at the racetrack or stables, Gibson gets in as much family time as possible.

Coming back to Ohio has afforded him with an ideal life, personally and professionally, a perfect recipe for happiness and contentment.

“It’s all about family for me. If I’m not with them, there is always something to do around home because you’re working seven days a week and racing five days. With such a busy work schedule, you appreciate any time you have to do what you want. Mostly, it’s spending time with family. I’m very fortunate that everyone understands what I do and that I might not always be there for certain moments. They know what the horse business is about. Some families might be upset if you miss a birthday party, but my family understands, and they know how much I love it.”

A love that only continues to grow.

“I really do love the horses and this sport. I feel lucky in so many ways. Once you get these horses in your blood, it’s impossible to even imagine not being around them.”