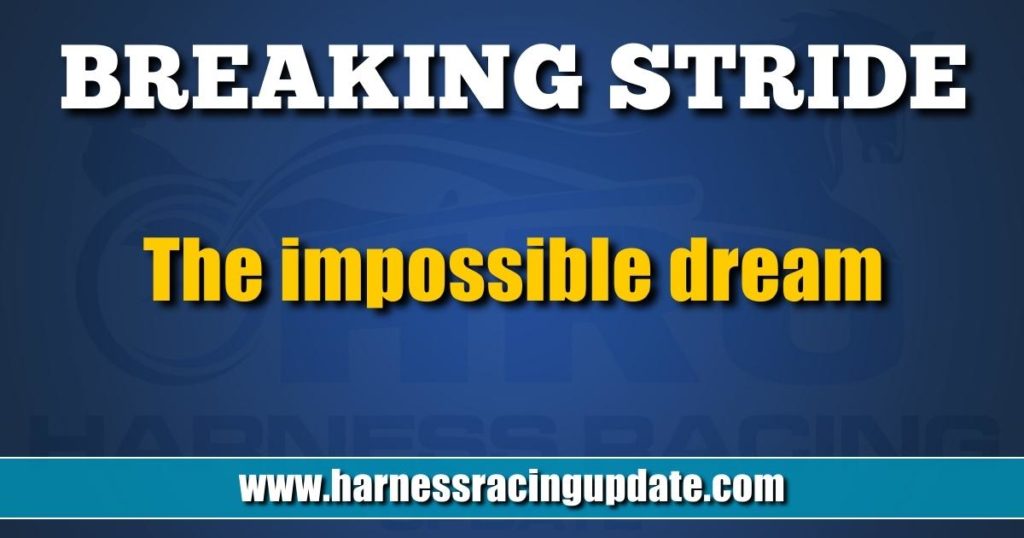 Once upon a time, a young couple changed their plans. Instead of a local movie theater for the latest James Bond movie, they attended a live theatrical performance of Man of La Mancha at the Hanna Playhouse. Neither the boy nor the girl was a live theater enthusiast, so the reason for the unusual date remains vague. Curiosity, free tickets, a whim, I can’t remember what prompted us to go to that theater – but something, some little thing, some happy accident, pushed our boat in that direction.

The show was excellent, breathtaking, and not the least bit corny. Tears filled our eyes when the Quixotic hero rose from his bed to sing the reprise from The Impossible Dream. The magic of an outstanding live play smote us that night. We remain smitten decades later.

I mention this because live theater has a similar arc as your favorite sport, from a leading player to a sport struggling for a foothold in current entertainment options. Both are expensive pastimes built on the foundations of dreams with aging demographics. In addition, both harness racing and live theater have a small, proud base who see greatness in their little world and are saddened and somewhat dumbfounded that more people do not see what they see.

When something fascinates, excites, or engages you, it’s human nature to try and share your passion. When others are not receptive, we feel deflated and frustrated. Two specific events this summer bummed me out.

First, a Shakespearean theatrical company offers free outdoor performances throughout the summer in our area. Free is an excellent price point. The setting was a park, the parking plentiful, the weather perfect, the performers terrific, and the playwright was Shakespeare. Instead of thousands, the audience was around two hundred, mostly older folks. A hundred years ago, heck, five hundred years ago, the audience would have paid, and the show sold out.

Second, this year, I paid forward a share of my fractional ownership of a yearling to a group of six non-racing people. I selected them carefully and nudged from the sidelines hoping to spark interest in our game. My audience had nothing to lose. The ride was free. The only ask was that they follow a young horse while I attempted to take their hands and lead them into our exotic world of harness horses and harness racing.

The results were underwhelming. Even with money on the line, very few bothered to watch the feeds of the races, and none took the initiative to visit a race or a training center in person. After a few perfunctory questions, they seemed to lose interest.

Efforts to revive interest in horse racing, live theater, and a thousand other quirky niches are frustrating to those who enjoy them. We feel like we are banging our heads against the wall. And we may be. We are not alone. Imagine live theater’s plight during COVID, or you own a bowling alley or any franchise that depends exclusively on live attendees. Nobody gets an easy ride in keeping an existing entertainment entity alive.

Recruitment seems like an uphill climb — but what is the alternative? Curl up in a ball? Will new supporters arrive via osmosis, or will someone else do the recruiting? Doubtful.

Ultimately, those still standing must keep trying and striving to place bricks in the wall of the passion we love. If each of us brings a new face to our sport, we will be stronger next year. The how of finding a new supporter is the question that begs an answer that only you can answer. Make it your quest. If a dozen approaches prove fruitless, there is always that 13th one and new people to ask.

Hey, I just got promotion idea number 14 – live theater on the live stream from the racetrack. Insert a 15-minute scene between races. Go ahead and roll your eyes. This idea is silly, but you never know where you might pick up a future fan.

A new year is a time for renewal. We each need to be a bit of a Don Quixote, forever on quests for good times, great horses, and new fellow travelers.

To dream the impossible dream

To fight the unbeatable foe

To bear with unbearable sorrow

And to run where the brave dare not go

To right, the unrightable wrong

And to love pure and chaste from afar

To try when your arms are too weary

To reach the unreachable star

This is my quest

No matter how hopeless

No matter how far

To fight for the right

Without question or pause

To be willing to march, march into Hell

For that Heavenly cause

And I know if I’ll only be true

To this glorious quest

That my heart will lie peaceful and calm

When I’m laid to my rest

And the world will be better for this

That one man, scorned and covered with scars

Still strove with his last ounce of courage

To reach the unreachable star