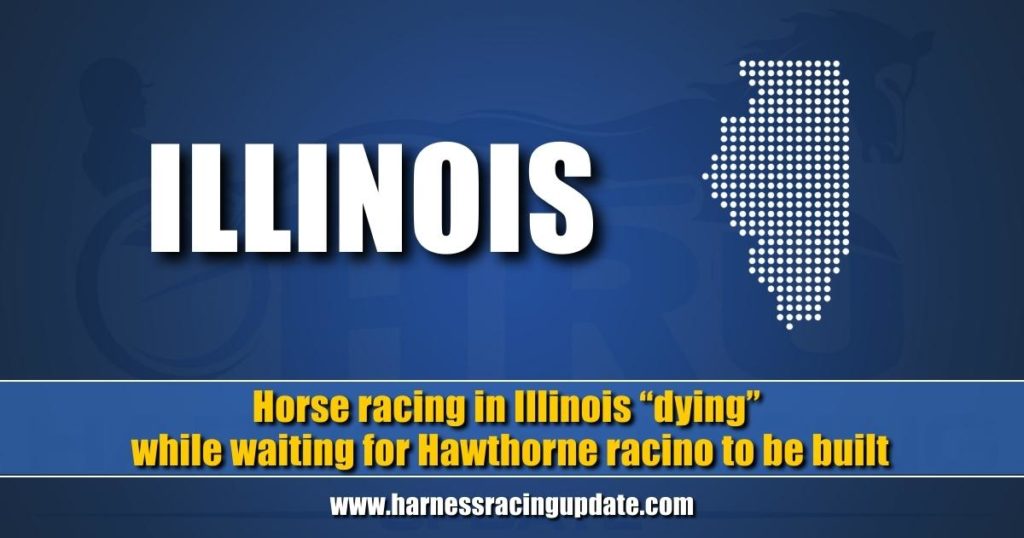 A front page story in Tuesday’s Chicago Tribune dramatized the precarious position in which Illinois harness and thoroughbred horsemen find themselves.

The Illinois legislature legalized casino gambling at racetracks in 2019 and the following year Hawthorne Race Course began preliminary demolition work to set the stage for construction of a $400 million racino that was scheduled to open in 2021.

Instead, Hawthorne has been conducting racing while parts of the grandstand and clubhouse are demolished and the project has been stalled because of a combination of the COVID-19 pandemic, inflation, high interest rates and supply chain issues.

That has left Hawthorne as the lone survivor among the seven tracks that operated in the Chicago metropolitan area in the early 1970s.

As a consequence, harness and thoroughbred horsemen have had to work out a time-share arrangement.

In 2023 the format will be significantly different—the thoroughbreds will race from March 4-Sept 4 and the standardbreds from Sept. 9-Dec. 31.

To minimize the major impact of the long layoff on harness horsemen, the horsemen’s purse account at Hawthorne will foot the bill for non-betting races twice weekly from June 12-Aug. 31 at the Springfield State Fairgrounds, 175 miles to the south. According to Hawthorne President Tim Carey, purses will total approximately $780,000 and Hawthorne will spend an additional $100,000 to cover operating expenses.

According to Illinois Harness Horsemen’s Association executive director Tony Somone, “The entire schedule for harness horsemen falls apart without these races. We’ve got to hold on until a casino gets up and running at Hawthorne.”

When it does, Hawthorne will allocate a share of the casino’s adjusted gross revenue to harness and thoroughbred purses, and Somone projects an infusion of as much as $12 million in the harness purse account that currently is in the neighborhood of $7 million.

At the 2023 dates hearings in September, Carey told the Illinois Racing Board that he expected construction would begin “later this year while we are racing.”

But that hasn’t happened so horsepeople are crossing their fingers in hopes that it will get underway during January and February when there is no racing and continue during the thoroughbred and harness meetings.

The Tribune story pointed out that while construction is yet to begin other ventures have gotten the go-ahead for new stand-alone Illinois casinos in downtown Chicago, Waukegan, East Hazel Crest and Danville. Temporary casinos have been established in Waukegan and Rockford and the downtown Chicago casino—which will be about a half-hour drive from Hawthorne, depending on traffic—is scheduled to begin operating at a temporary location in the Medinah Temple in June prior to moving to its $1.74 billion permanent site in 2026.

Horsepeople fear that by the time Hawthorne’s racino opens the other casinos will have established a foothold in the betting marketplace, leaving it dependent on customers living in close proximity to the track.

McCoppin cited a significant impediment to progress. He wrote: “Where Hawthorne is limited to income from its track, sportsbook, off-track and on-line betting competitors typically have the revenue from other casinos, or have used creative partnerships. Bally’s, for one, sold its land and leased it back to raise $500 million for its $1.74 billion casino complex in Chicago.

“As a family-owned business with 160-some shareholders, Hawthorne had to restructure to make the [Illinois] Gaming Board vetting process easier.”

Despite all of the obstacles he has encountered, Carey said he is optimistic.

“Hawthorne casino is coming, and it’s going to transform Illinois horse racing for generations,” he said. “We believe that we can rebuild this industry.”

One need no further than Illinois’ next door neighbor, Indiana, to see the major impact casino components have on racing. Pari-mutuel betting didn’t begin there until 1994, but today harness racing at Harrah’s Hoosier Park Racing and Casino and thoroughbred racing at Horseshoe Indianapolis are thriving.

Meanwhile, in Illinois, the quality of racing, the number of people employed in racing and the foal crops have fallen dramatically.

The role that Churchill Downs, Inc. has played in Illinois racing’s demise has been enormous. Arlington had been conspiring for years to put Hawthorne out of business but after sister harness tracks Balmoral Park and Maywood Park were forced into bankruptcy the CDI subsidiary joined with Hawthorne to prompt the Illinois Racing Board to deny them dates in 2016, thereby wiping them off the racing map.

For years Arlington lobbied for a racino but when it became possible because of the 2019 legislation the track suddenly did an about-face and said it wasn’t interested.

The obvious reason was because in 2018 CDI acquired a 62 per cent interest in nearby Rivers Casino, by far the biggest money-maker of the 10 Illinois casinos operating at the time.

Then, came the decision to sell the Arlington property to the Chicago Bears (a deal that is expected to be finalized next year) with a string attached — the new owner would have to tear down what Architectural Digest once described as “the world’s most beautiful racetrack.”

The cessation of racing at Arlington has had several ramifications for CDI’s bottom line.

The possibility of a close by competitor to Rivers for casino gambling dollars has been eliminated;

A close by thoroughbred competitor for gambling dollars has been eliminated;

Both thoroughbred and harness racing in Illinois have been crippled because they are forced into a time-share arrangement at Hawthorne, prompting many bettors who live in the vicinity of Arlington to either bet by phone or on-line on Churchill Downs races during the spring, summer and fall or spend their gambling dollars at Rivers rather than make the long drive to Hawthorne.