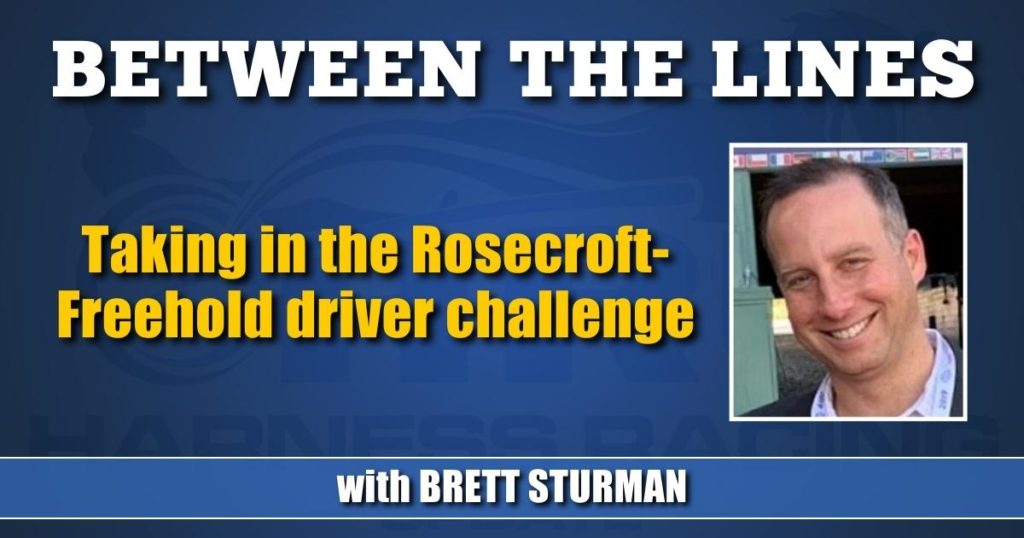 Taking in the Rosecroft-Freehold driver challenge

Far from short on hyperbole, the driver challenge between the colonies from Rosecroft and Freehold Raceway was billed as a collision of the “harness racing worlds of New Jersey and Maryland.” Credit the marketing department, because as it turned out with day one of the challenge occurring the same night with a Woodbine Mohawk weather cancellation and not much else going on, the publicized build up to the competition as a battle of the titans was enough to bring me in.

Starting with the four against four matchup, it almost didn’t even seem like a fair fight, on paper. The Freehold group of Eric Abbatiello, Johnathan Ahle, Vinny Ginsburg and Tyler Miller have been tested. Even the younger guys like Ahle and Miller race and win at places outside of Freehold like Harrah’s Philadelphia and the Meadowlands, and of course the success of Ginsburg and the elder statesmen, Abbatiello, is well known. For the Rosecroft group of Eric Davis, Declan Donoway, Russell Foster and Trae Porter, I’d be lying if I said I could tell you much of anything outside of Foster.

But the first day of the challenge proved to be a surprise, and a pleasant one at that in how the challenge races were run. Perhaps with more knowledge of the local horses and maybe slight deference from the Freehold group, team Rosecroft swept the four races on Thursday. Twenty-one-year-old Trae Porter starred as driving home three of those four winners.

In the first driver challenge of the race of the night, team Rosecroft delivered as expected with Trae Porter on the 4-year-old Rockin Image gelding, Select Friday. Sent off at odds of 50 cents on the dollar, Select Friday was trained by Katie Callahan, who sported a 10 for 68 win record at Rosecroft this year heading into the Thursday card. No other trainer in the race was better than 2 for 26, and the 3-1 second choice in the program was a 14-year-old gelding from post 8. In what was probably a tactical error, one Freehold horse parked another one out past the opening quarter of :27 in the off-going for bottom-conditioned horses. Predictably, the pace fell apart and it was the three horses from far back, including Porter and Select Friday who were second over, who ended up 1-2-3 in the race. Can’t say that there wasn’t any action in the race!

The results in the next race were even more interesting. Team Rosecroft was down one driver in the race as Eric Davis’ horse was scratched sick, and it didn’t even matter in the slightest. With just three drivers in the race, Rosecroft swept the top three spots. And it was Porter again, but this time in opposite fashion from his win in the race prior. While he stormed from off the pace once again, this time he guided home a near-$20 longshot winner, Homestretch Wes from an outside post for a barn that was 3 for 61. The only possible angle was the driver change from Rick Still to first-time Porter. A $1 trifecta for the Rosecroft trio of Porter, Russel and Donoway in the shorter field came back to pay $401.60.

Porter didn’t figure in the third driver challenge race
with a hopeless longshot, but he was picked up by Foster who went wire to wire, and fellow Rosecroft driver Donoway took second to nail down another Team Rosecroft exacta.
This one looked evenly matched between the driving colonies, but Foster took control right from the start with While Rolls,
who won wire to wire while making his second start in the Amanda Malone barn. The Freehold favorite in the race
Redding Hanover (Ginsburg) was never in position while being last at the half; likewise Authentic Hanover (Ahle) who also rated a chance on paper, closed spectacularly for fourth but it was way too late.

In the final challenge race of the night, it was fittingly Porter who closed it out with another off-the-pace, going-away win with Son Of A Lynx for trainer Jeff Stafford of Darlins Delight fame. To put an exclamation point on the night, Rosecroft drivers Donoway and Davis once again completed the exacta and trifecta for the Maryland-based group.

For these four races, the racing was impressively more competitive than you would see at most other tracks in overnight races. A good show was put on for sure, and it gave some people such as myself a reason to pay attention who otherwise wouldn’t have been.

With this being written before day two of the challenge at Freehold on Saturday, the team from New Jersey will suddenly have their work cut out for them in defending their home turf. Porter is just 6 for 75 at Freehold this year but will enter with the hot hand. It’ll be worth watching.