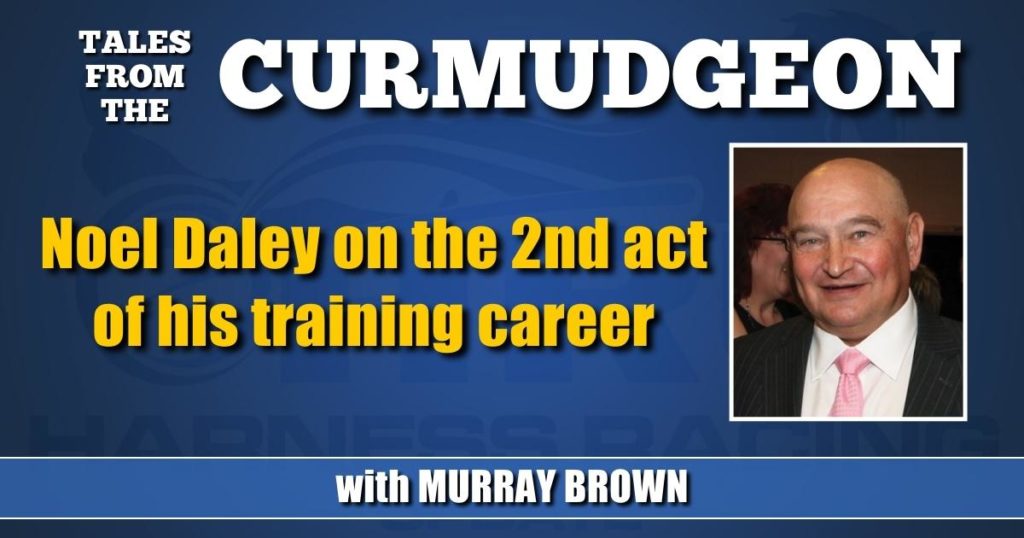 Noel Daley on the 2nd act of his training career

There are not too many trainers with two viable Horse of the Year category candidates. But, this year, Down Under transplant Noel Daley has 2-year-old colt trotter Volume Eight and 3-year-old pacing colt Pebble Beach This scribe caught up with Daley two days before he left for his annual trip to Australia with his 10-year-old son Max in tow.

You are not the first Down Under superstar who has landed on these shores. Among the first were Ross Croghan and Brian Pelling, then others such as Brett Pelling, Nifty Norman., Mark Harder, yourself and now the driving superstars Dexter Dunn and the McCarthy brothers Andrew and Todd. To what do you accredit such incredible success, one might say dominance by the boys from Down Under?

“I would guess that the common answer might be hard work and I suppose that is a part of it. Two other segments might be: Firstly, in Australia and New Zealand, kids involved in harness racing generally look upon North American racing as being where ‘it’ is at. This is the place where The Hambletonian, the Little Brown Jug, the North America Cup and other classic races are found. This is where they dream about maybe becoming a part of those races. The second biggest factor is probably that they look upon the incredible success of someone like Brett Pelling and think to themselves, ‘Look what Brett has done, why can’t I?’”

Tell us the Noel Daley story

“In 1989, I landed in sunny California. I worked there for six months with Pete Foley. I quickly realized that if I wanted to make a living in harness racing, the East Coast, specifically New Jersey is where I needed to be. In August of 1990, I Ianded a job with Brett Pelling. At the time Brett had arguably the most successful stable in the world. I stayed with Brett for eight years after which we had a disagreement so inconsequential that I don’t remember what it was about. I guess I just decided the time was here when I needed to go on my own. I started out with two head and it grew into a decent sized stable which was doing alright. Then Adam Victor came into my life.”

Can you tell us about your history with Adam Victor?

“I was in The Meadowlands paddock when this man dressed in brown overalls came over and introduced himself. He said his name was Adam Victor and that he was interested in getting into the horse business, could he come to my stable and see my operation. I said, ‘Sure,’ thinking at the time that he was a working bloke who might buy a claimer or two for the stable. He came to the stable and I guess we hit it off from the beginning. Little did I know that the man who I thought might buy one or two horses for me to train might grow to having as many as 90 head at one time. We did extremely well from the get go.

“Adam’s son, Adam Jr., had taken an interest in harness racing and became quite knowledgeable about horses’ pedigrees. Because of Jr.’s affinity for young horses, the shift in the stable switched from being an overnight operation, which Adam Sr. preferred, to being one where developing young horses to hopefully become champions became our goal.

“We did pretty well. Among our best horses were Mr Muscleman and Explosive Matter. As happens in this game of life, Adam graduated from the Wharton School of Economics at the University of Pennsylvania and secured a job at Goldman Sachs. That firm shipped young Adam to London to work in their London office. Over a period of time, Jr.’s interest in the horses waned and consequently so did his father’s. After awhile, they were out of the business. We still are great friends, though. When we were together it was almost like we were family. We’d have Sunday dinner each week at Smith & Wollensky in the city and meet for pizza each Tuesday at Arturo’s. We did this every week for eight years. I’m still friends with both of them and we speak several times a year. Unfortunately, they no longer have any horse interests.

“Another horse that I had fairly good success with was Broad Bahn. I won the 2011 Hambletonian with him, but he wasn’t near that kind of horse. The stars were shining bright in perfect alignment that day. That’s not to say he wasn’t the best horse that day. He very well could have been. I had great confidence in his doing well. The story of how I got him shows me that I’ve often been more lucky than smart. Olle Bach came to me with this big colt that he wanted me to train. To say that he was big is an understatement. I generally prefer a good sized horse, but this boy was too big. I would never have picked him to train on my own volition. That didn’t stop him from winning the only Hambletonian that I’ve ever won.”

So, here you are without your largest client. That must have been difficult.

“It wasn’t all that bad. They just didn’t decide to get out and do it immediately. This was a gradual exit over a period of time. Besides which, when we had as many as 90 of their horses in the stable, we had a total of 125. We just went on and managed to be fairly successful. In the interim, my son Max, my pride and joy was born. After a little while, I suppose one might say that I grew homesick.

“In 2018, Max was nearing school age and I realized that he didn’t even know his relatives, all of whom were in Australia. I thought that it might be interesting to move back to Oz, start over and have him go to school there. That thought was daunting. At about the same time, Emilio Rossati the most prominent owner in Australia, was looking for a private trainer to handle his stable. We had met before on several of Emilio’s trips to this country. Ultimately I accepted his offer and went to work for him.”

How did that work out?

“Not near as well as we both hoped it would. I suppose I had probably gone too long being my own boss. I wasn’t used to being told how things should be run. Emilio is a self-made man who has always made his own decisions. I felt I should have some say in which horses should be acquired and how they should be trained and raced. The bottom line was it just didn’t work out.

“After a year, I realized the words of Thomas Wolfe ‘You can’t go home again’ rang true. Home now was the U.S. of A. Max and I packed our bags and came home. I was going to start all over again. I had one horse of which I had owned part of. Gradually I started to build up a small stable. I owe a lot, maybe most of my success, to a dear Finnish friend of mine Martti Ala-Sepalla who is the greatest student of trotters I have known, both in terms of pedigree and the ability to see talent in a young trotter by watching a video of it in action. I didn’t have a whole lot of money to spend on yearlings in 2019. Martti mentioned a trotting filly who was extremely well bred, but who’s dam had been a disappointment thus far. For various and unknown reasons she had failed to produce a good horse. Her filly this year was a Donato Hanover out of Aunt Mel. Martti really liked this filly and thought that she might fit my budget. Her name was Anoka Hanover. We bought her for $35,000 and she became the Two Year Old Trotting Filly of 2020. I was lucky enough to own a good piece of her. Things went well from there.”

“A long-time owner of mine, Harvey Fried, mentioned that he had seen the video of a pacing colt that caught his eye. Just about the last thing I was looking for was an Ohio-sired pacing colt. But I went to look at him, it was love at first sight. I and seven of my owners bought him. His name was Pebble Beach. He has turned out really well and has earned over $1.7 million.

“Last year, my friend Martti once again came to the rescue. He told me, ‘If you are going shopping in Harrisburg, I think there is one colt I think you need to buy. He’s a Chapter Seven colt, the first foal of an Encore, Encore mare named Lass A Rope who was a very good race filly and comes from a family that I believe is much better than most people would think it is. He might go into six figures, but I think, within reason that you need to buy him, even if he brings that much.’ That colt was Volume Eight. I was able to buy him for $70,000, at least $50,000 less than I had him budgeted for. To be truthful, if not for Martti, I doubt that I even would have looked at him. I didn’t know, Encore Encore. I didn’t know the family. Of course, I looked at his video and I thought very well of him in action. As an individual I thought he wasn’t as big as most yearlings that I prefer, but he was a terrific individual.”

Tell us more about Volume Eight. There are some including myself, who think that he might be destined for greatness.

“He trained well and I certainly thought well of him. Our game plan was to start him in a few New York Sires Stakes and then if we thought he was good enough, we might aim for the rich races towards the end of the year.

“But then we had some hard luck. In the spring, he was turned out in a paddock. We found him with a torn up tendon in the front of a hind leg. There went our plans for the New York Sires Stakes. At that point we were concerned about his chances of survival, let alone his racing career. We took him to a prominent vet clinic and they sewed him up.

“The prognosis for his 2 year old season was anything but positive. Thankfully, the leg healed up and we were able start him back training. He trained well. His first stakes start was in the Standardbred at Delaware, Ohio. He won that and he looked good in doing it. We then went to Lexington. The first week I was somewhat disappointed in the way he raced. In the second week, he raced like the colt I hoped he would be. We then took him to The Meadowlands where he raced okay in a leg of the Kindergarten finishing fifth. In the final of the Kindergarten he was just sensational. Andy McCarthy who isn’t much for raving said to me after that race, ‘That was the first time I’ve ever spent the last quarter of a race yelling whoa to a horse.’ The next week was the Valley Victory which he also won by open lengths although he wasn’t quite as good as he had been in the Kindergarten final. We are on to the big 3-year-old year next year. If all goes according to plan, which it rarely does, we will probably race him a few times before the Hambletonian, then race him there and then go on and finish the year.

“We will see what happens.”