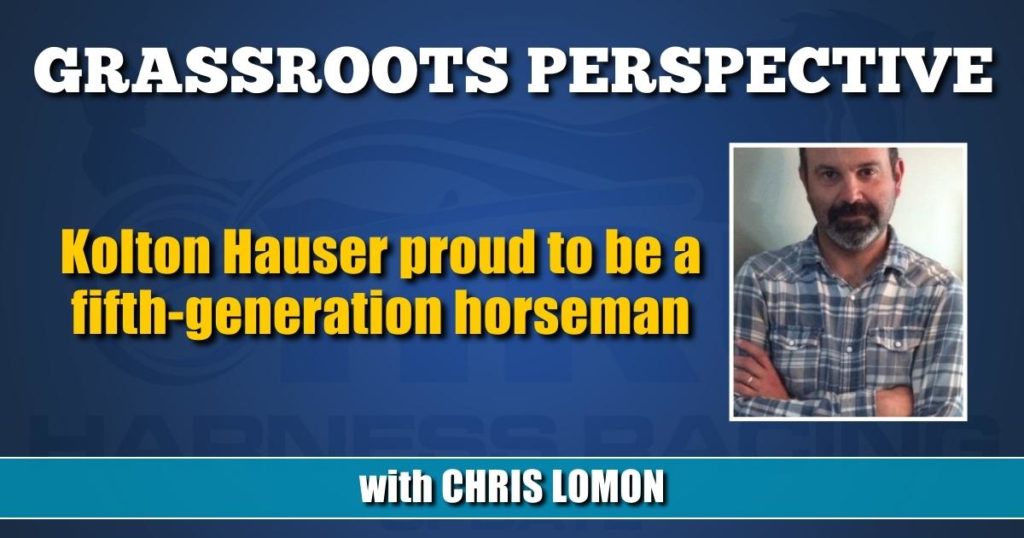 Kolton Hauser proud to be a fifth-generation horseman

Standardbred racing is no doubt a family affair for Kolton Hauser, but his love for the sport goes well beyond just his DNA.

The 17-year-old Iowan is in the early stages of his horse racing life, one that is, at least for right now, best described as a jack-of-all-trades career.

And while he represents the fifth generation of the sport on his mother’s side, the teenager, in his final year of high school, never felt compelled to follow in the footsteps of others.

His love for the horses and horse racing is as genuine as can be.

“I guess you can say I was born into it,” said Hauser. “Both sides of my family have been involved in it for a long time. My great-grandpa, Keith Carey, he’s 101 now, and has been in racing for 80 years or so. My grandpa [Jeff] and my uncle [Curtis] also are in racing. In the summer, all of us together at the races. That’s the story of my connection to the sport.”

In the middle of the worldwide pandemic, Hauser had a chance, albeit brief, to really immerse himself in the standardbred scene.

For a two-week period, during a school break, he was at the family barn every day helping his grandfather, playing his part in readying the horses for the races.

Hauser, an aspiring driver, has done the same thing, although in the summers, ever since then.

“I haven’t driven in a race yet, but I did compete in a race for grooms. I’ve done that twice and so far, and I’d say that’s the biggest thrill. In Iowa, we also have the championship weekend. When you have a horse that you’ve taken care of since it was a weanling and you see them race as part of that big event, that’s pretty cool too.”

There are two particular horses that come to mind when Hauser speaks of the bond he’s forged with certain pacers and trotters he’s been associated with so far.

Minnie Vinnie, a 7-year-old son of Millionaire Cam bred and co-owned by his grandfather, is one of them.

And then there is Nat A Cam.

Co-bred by Hauser’s great-grandfather (who also owns), grandfather and late great-grandmother, the six-year-old pacing daughter of Millionaire Cam sports a mark of 26-16-11 from 72 starts, coupled with nearly $65,000 in earnings.

The bay mare has been a perfect teammate for Hauser.

“She’s taught me pretty much everything I know when it comes to driving. She’s my great-grandpa’s mare. They bought the broodmare Nat A Tat Tat, and this is her daughter. One of those horses will probably be the first one I drive in a pari-mutuel race, so that will be something I am really looking forward to.”

Hauser has already drawn a gameplan for the next five or so years, one that includes a combination of education and equines.

Next year, he’ll attend college, where he will most likely pursue a degree in agricultural business. But his connection with horses won’t be put on hold during those years in the classroom.

“I took my horse racing driver’s test, which is a big step towards furthering that part of my life. The short-term goal is to drive and win a race. A long-term goal, that’s tougher because I’m going to school. But I will still be training horses and hopefully, I will have a bigger role in Iowa harness racing than I do now.”

Hauser is also looking to court success on the hardcourt with his high school basketball team.

After a tough start to the season, the squad has turned things around of late.

“I really enjoy basketball a lot. With racing, especially in the summer, there’s not much time to really do anything outside of that. But I really like basketball. We struggled early after playing some really good teams to begin with, but we’ve got a nice stretch where we can get some wins and get things back on the winning track.”

Not surprisingly, Hauser does see connections between hoops and horse racing.

“With basketball, you have to work as a team to reach your goals and you do the same with racing. Me, my grandfather and my uncle, if we disagree on an approach, we have to be able to talk about it, work together to solve problem and try to achieve success, just like in basketball.”

And, just like when he’s playing his sport of choice, Hauser is willing to do a little bit of everything to ensure everything runs smoothly at the barn.

It’s why he is anything but a one-trick pony.

“In the summer, every morning, we have to train the horses, jog them, make sure they get their exercise every day, feed them, clean their stall, and just make sure they’re doing well. Currently, me and my grandfather are working with the weanlings, getting them broke and doing all that. On race days, I help harness and help unharness, bath, and all that stuff.”

None of the jobs are met with resistance. In fact, Hauser happily embraces every moment.

“It really nice to be able to work with your family. It makes everything so much easier. I don’t know how to explain it, but when you have that opportunity to work with the people you are closest with, it makes every day a good one. And to see how happy my great-grandfather is, that always makes me happy. He gets around really well for his age. In the summer, he’s at the barn every morning. If he doesn’t make it, he apologizes and feels bad about it. But you can see how much racing and family means to him.”

Just as it does any time Carey sees his great-grandson sitting behind Nat A Cam.

“My great-grandfather has taught me so much about racing and Nat A Cam, she’s done the same. That’s a really cool association to have. I love racing and to enjoy all of that with my family, that just makes it extra special.”