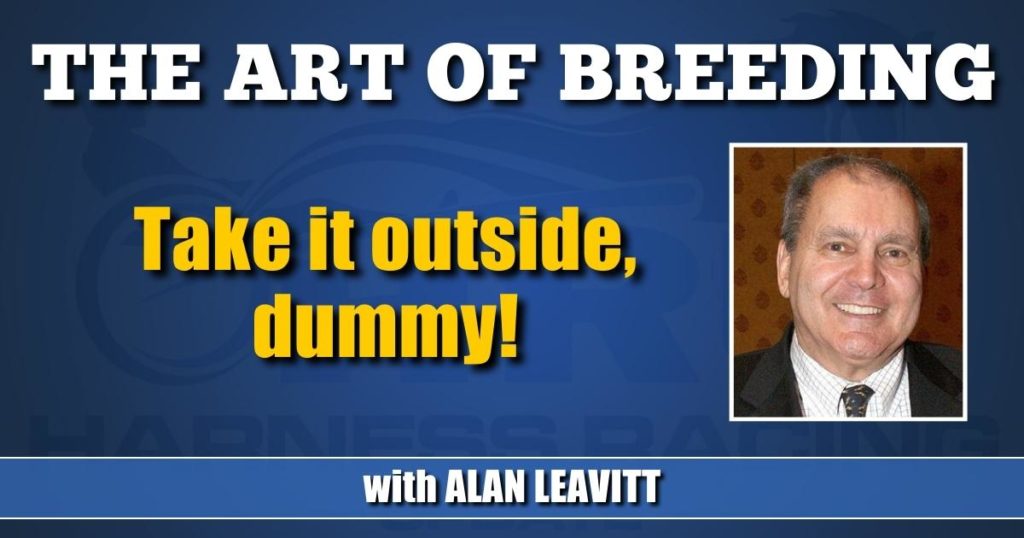 Take it outside, dummy!

Another new trotting sire for next season is Back Of The Neck, and he’s worth a second glance. He’ll be 6 when he stands his first season in ’23. Sired by one of the best French sires, Ready Cash, and out of Big Barb, by my school’s namesake, Andover Hall, Back Of The Neck took a record at 5 of 1:51 while earning $1,463,733, most of it for trainer Ake Svanstedt.

For those who believe, as Federico Tesio and I do, that brilliance at 2 foreshadows sire excellence, Necker was more than adequate at 2, although not a world beater. He went on to race through his 5-year-old season in ’22, and he got better and better as the years went on.

That says volumes about his soundness, which can be a factor worth noting in any stallion. There’s no question that soundness or a soundness problem, can somehow migrate from a horse’s Phenotype, aka the living horse, to his Genotype, which is his genetic profile.

A classic example of this was Valley Victory, a horse who brought the breed to a higher speed level himself, and then through his racing progeny, but was badly unsound and passed on that unsoundness to the next generation.

When you probe Necker’s background, another thing pops out that deserves some research from the USTA. Back Of the Neck is his dam’s first foal. In doing my pedigree work, I have found over and over again that virtually all the best racehorses of the past 20 years, at least, have been the first or second foals of their dams.

In the case of BOTN he is Big Barb’s only foal by Ready Cash, although the four others are by Father Patrick, Muscle Hill and Cantab Hall. So, one could make the argument that Necky owes everything to his sire, who only got one shot at Big Barb. But from all the unofficial pedigree research I’ve done, I have to wonder about being Big Barb’s first foal might have a lot to do with his success.

There is a fascinating tidbit deep in Ready Cash’s extended pedigree. His sire, Indy De Vive, is out of Tekflore, who’s by Kepi Vert, and out of Morgaflore. And Morgaflore is by French super sire Florestan.

Florestan brings back many memories from long ago, not because he’s by Star’s Pride, but because he’s a son of the all-time great French race mare, Roquepine. I syndicated Speedy Crown at the start of his 4-year-old season, and some of the greatest trotting battles in the history of our sport were waged between Speedy Crown and Roquepine.

In a personal aside, next to my marriage to Meg and my three children, the most important relationship of my life started with Howard Beissinger, the trainer who came with Speedy Crown.

Howard is gone now, but I’ve never forgotten the wisdom I learned from him.

I shoe my yearlings with a 5/8’s half round front shoe for their videos, because that’s how Howard started his babies.

Whatever tools I occasionally find myself using are carefully resharpened before I put them away.

And I don’t ever forget that people never change, no matter how much they would like you to think so.

So long, Boss. Won’t be too long now, and we’ll have a lot to talk about.

Another subject that won’t go away is the Horseracing Integrity and Safety Authority. Thanks to Russell Williams, last week it got legally slapped down, but it is down, not out.

What must be understood RE: HISA is this: If HISA takes over North American harness racing, the costs it might pass on to our sport could end harness racing on a commercial basis.

And yet there are some pretty smart people among us who are pulling for HISA. It’s understandable that there is enormous frustration with the incompetence and ineffectual enforcement policies of the various state racing commissions.

Several correspondents have reinforced my awareness of the incredible position taken by several commissions RE: penalties, i.e. that if a drug offender agrees not to appeal his or her time suspension, it will be reduced by half.

This is such a perversion of our proper legal process it beggars belief, yet every month it happens again and again.

I also noticed that recently there were some offenses for fighting, i.e. fisticuffs.

I can just imagine Howard’s reaction to such dummies who didn’t learn the first week that you always take your problems out to the parking lot, where nobody can see what’s going on.