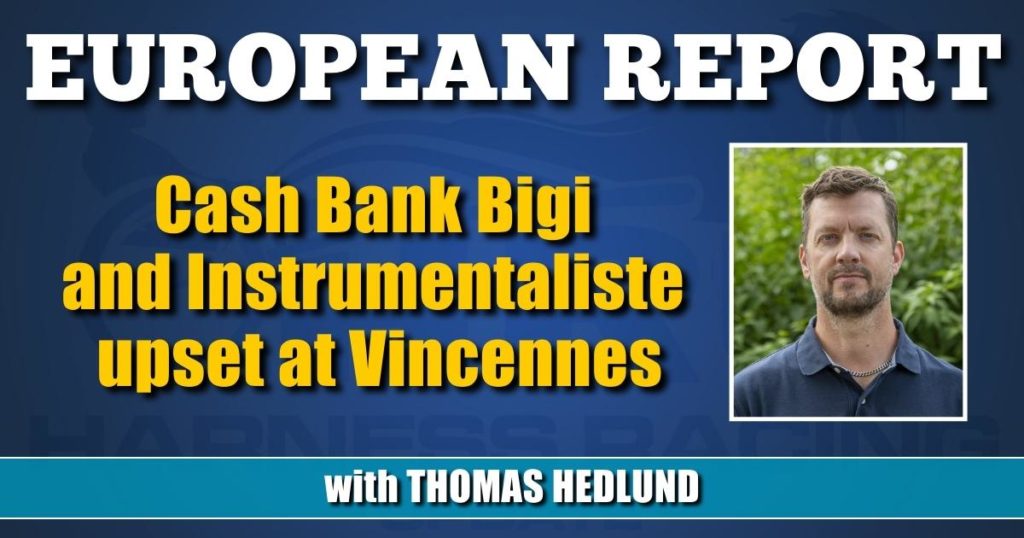 Cash Bank Bigi, earlier trained by Alessandro Gocciadoro, has adapted well to French conditions and the 4-year-old mare looked strong all the way, covered by first over trotter
Inmarosa.

Inmarosa disarmed leader I Love Me at the top of the stretch, but couldn’t defend herself when Benjamin Rochard used Cash Bank Bigi’s speed. The two front horses fought hard towards the wire and Cash Bank Bigi put her head first just before the finish line. The mile rate over 1.6 miles was 1:57.1.

Thierry Duvaldestin trained Idao de Tillard was the big favorite in the $125,000 Prix Octave Douesnel for 4-year-old colts and among the opponents, Philippe Allaire’s Italiano Vero was the leader midway through the race. Idao de Tillard was settled behind the leader while Instrumentaliste (Ready Cash) was seen in third and second over.

Idao de Tillard never found his room for challenging leader Italiano Vero and Thierry Duvaldestin’s horse finished third. Instrumentaliste and Italiano Vero battled on the stretch and Sébastien Guarat trained Instrumentaliste, driven by Gabriele Gelormini, wanted the most and claimed the trophy in a mile rate of 1:56.3 over 1.6 miles.

Gocciadoro trained Zeudi Amg (Ideale Luis) hit the lead at an early stage when $105,000 Royal Mares was held in Naples, Italy on Thursday (Dec. 8) afternoon and it ended with the mare’s 25th lifetime win. The mile was 1:54.4.

Two-year-old East Asia (Ready Cash) impressed when she claimed the $190,000 Gran Premio Mipaaf after a first over trip. Driver Andrea Farolfi had great belief in his horse, which was proved when he left third over for position outside the leader after a half mile. East Asia, owned by Jean-Pierre Barjon, president of the French Harness Racing Association, and trained by Mauro Baroncini, won in a mile rate of 1:58.2 over 1.3 miles and she claimed her third win in four attempts.

The 2-year-old colts battled in the $190,000 Gran Premio Mipaaf and Wishing Stone son Energy King Gar was served a perfect pocket trip by Antonio Simioli and the duo left that position and attacked leader Explosive Axe in the last turn. Energy King Gar got advantage of the race on the stretch and Pierluigi d’Angelo’s trotter won in a mile rate of 1:59 over 1.3 miles.

CALGARY GAMES IS BACK

Timo Nurmos’ 5-year-old Calgary Games (Readly Express) has not been racing since his victory in $400,000 European Derby in October 2021 and after an impressive qualification race at Solvalla on Nov. 2, the undefeated top trotter is ready for comeback.

Calgary Games will enter an overnight race at Solvalla Wednesday (Dec. 14) and Björn Goop will drive the horse for the first time in a race.

Nurmos hasn’t revealed any plans for his horse, but the Wednesday start is pointing towards an attempt in Paris later this winter. Prix d’Amérique should be the main goal and Calgary Games is today the favorite to win the big race at Vincennes in January, according to several betting sites in Europe.