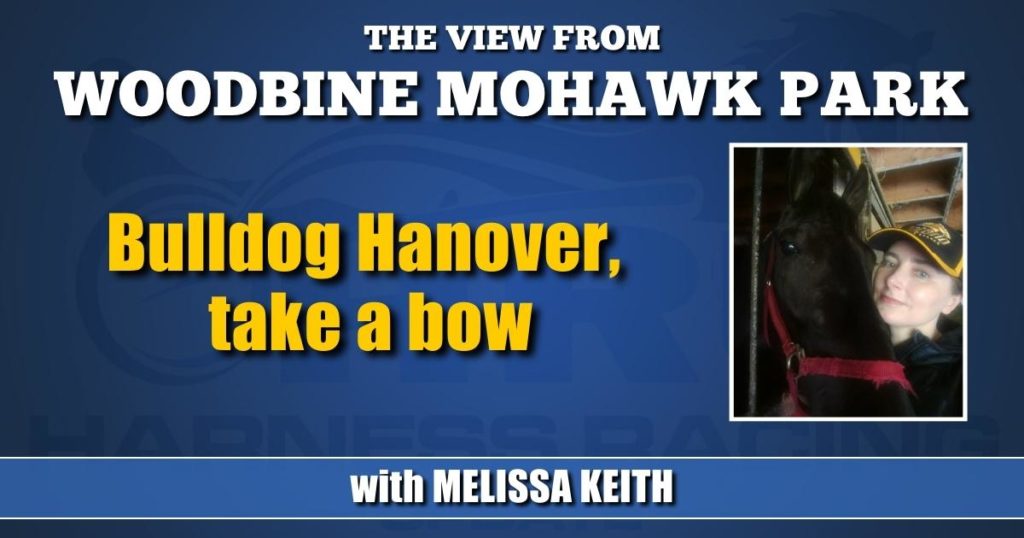 Celebrating at Woodbine Mohawk Park, settling in at Seelster Farms.

Woodbine Mohawk Park’s Saturday night (Dec. 3) tribute to Bulldog Hanover (p, 4, 1:45.4m; $2,419,000) was a perfect homecoming for the sport’s fastest-ever horse. He began his career there on June 27, 2020, qualifying unremarkably for Jody Jamieson. The then-2-year-old colt broke his maiden on July 20, 2020 at the Campbellville, ON track, winning an Ontario Sires Stakes Grassroots event. He quickly stepped up into OSS Gold company and went undefeated at his home track in three more seasonal OSS starts there, including the Gold Super Final.

Bulldog Hanover began his 3-year-old campaign at Mohawk as well, with wins in back-to-back qualifiers leading up to his first 2021 pari-mutuel victory, July 3 in OSS Gold at WMP. The Shadow Play–BJs Squall son was riding a four-race win streak into the North America Cup, where he was favored but finished fourth. The remainder of his wins that year would come at Hoosier Park, where he went undefeated in four late-season stakes.

At age 4, the Jack Darling trainee still belonged to the Cambridge, ON horseman and partner Brad Grant of Milton, ON, but rapidly evolved into the people’s horse. Over the course of his 14 wins in 16 seasonal starts, Bulldog Hanover equalled the fastest-ever mile in Canada (1:46.4s) twice at Woodbine Mohawk Park. Both were after his 1:45.4m record mile in the William R. Haughton Memorial TVG FFA on July 16 at The Meadowlands. He concluded his racing career there Nov. 26, capturing the TVG Open Pace in 1:47.3m for driver Dexter Dunn.

Ann Straatman did not attend.

“I had laryngitis for most of the week, but we did send the rest of our team,” said Seelster Farms’ equine reproduction manager. “My sisters went, and their families, and all of our Seelster crew went to celebrate with Bulldog right there for the last day. We had a bus go down and they had dinner. I wasn’t able to join them, but I made all the reservations and preparations.”

“It’s bittersweet, for sure,” Straatman told HRU. “We’re just thrilled to have him. The racing world was so excited just to see him one more time. Even today, when Jack and Johnny dropped him off, it wasn’t sad, but it was bittersweet – the end for them, and a whole new beginning for Bulldog, starting with breeding. He’s already had so many nice mares booked for next season. It’s an exciting year for him.”

She said Seelster introduced Bulldog Hanover to their stallion roster back in 2021, when the horse was not yet retired from racing.

“When we began, he was just finishing up his 3-year-old year. He still had a few races to go, in Hoosier Park. I got a call late on a Friday afternoon from Jack Darling, wanting to know if Seelster would have interest in standing Bulldog while he was training for racing in his 4-year-old season. We’d been following the horse all along – loved him, and found a way to make it work, where he could collect very near to Classy Lane Training Centre.

“We worked with a clinic there who helped us with transported semen and collected him every Monday, Wednesday, Friday. We were all-in, as soon as we found a way that we could make it work. It was an easy ‘yes’ for us.”

Although Bulldog Hanover hadn’t captured divisional honors at age 2 or 3, Straatman shared the faith his connections placed in him: “He was not quite at the million-dollar mark yet, and I thought it was prudent [to take him on as a stallion] because he was finishing his season so strong, winning four stakes in a row. Jack was very high on him, saying that he’d never been better. He was a big believer that the horse had more to show. So, for us, we wanted to be in on that first crop of a horse who was still adding to his already-impressive resume.”

“It was a dream come true, absolutely, watching him…Every week he was better.”

There was unmet demand for the first-year stallion, as his priorities shifted from breeding shed to the track.

“We could have booked quite a few more [mares],” said Straatman. “But we always knew his racing season was very important, those four races coming up [at The Meadowlands] were really important, so we did the best that we could in the time limit we had, which was closing him about seven to 10 days before the end of the breeding season. It wasn’t a huge inconvenience for breeders, but there’s always some that want one more chance at him. We just couldn’t offer that this year.

“We were blessed with a really perfect scenario. It wasn’t a huge book of mares – booked 80, bred 79 – but it just worked out so well. It was a clinic we’d used before, for fertility testing. We had worked with Robert Fera [of Deerpath Breeding & Development, Puslinch, ON] on a few other stallions, and he was agreeable to put in the time during the breeding season, which meant a lot of communication. We needed the cooperation of Bulldog, too.”

Breeding did not affect Bulldog Hanover’s mindset on the track, but rules did prevent him from continuing to be collected.

“The competition was fierce for him – all of the top aged horses. He seemed to handle it so well, and by the time he went to The Meadowlands for those four races in a row, we had to close his stud book,” said Straatman. “Once he leaves the province, we’re no longer allowed to breed him anymore. So it was late June when he went down there, and there were a few [mare owners] that were trying to jump in late, to get in his book, but couldn’t get in because he had left the country for those four races at The Meadowlands.”

In his second breeding season at Seelster, the personable stallion will serve up to 180 mares. The farm’s reproductive manager told HRU that Bulldog Hanover was already overbooked as of Dec. 5, with a few remaining shares on his syndicate remaining.

“All the big farms here in Canada and in the US are participating in his syndicate, so he’s bound to have a great book for the foreseeable future,” she said. “We have more applications than we do have spaces right now, but all the [mare] applications will be looked at, if there’s people that still want to get in.”

Darling recorded video as his horse stepped off the trailer Monday morning. Bulldog Hanover moved easily from Saturday’s fan photos and applause at Mohawk, into his stall opposite Big Jim in the Seelster stallion barn.

“He’s so smart,” said the appreciative Straatman. “We got to have him a little while, between his racing [seasons]. He finished late November last year and we got to have him until the second week of February, when he went back to Classy Lane for training. He’s an intelligent horse, he’s very easy on himself. His physical attributes are excellent for a stallion: He’s the perfect size, the right look. Everything about him is great.”

She pointed out that Bulldog Hanover broke away from some popular stereotypes about breeding, elevating his Canadian Hall of Fame sire Shadow Play to renewed attention and dispelling a myth about older broodmares.

“You know, he’s the 13th foal of the mare [BJs Squall]. Everyone tries to put down a later mare, but she’s so well bred, and having that Artsplace dam matches him so well with many nice mares. We bred 10 of our own mares to him, so we’re just thrilled to be able to start that early season.”

Straatman said Bulldog Hanover would spend the coming days much like he spent Monday at the farm. “That will be his routine: Breakfast and then outside to play. We have a great stallion manager, Joanne McGinnis; she looks after all the stallions. They get groomed and bathed and pampered, like they were still racing. She does a great, great job with them.”

The racetrack is now behind him, but not the admiration he received during his remarkable campaign. Straatman told HRU that anyone who missed the chance to see Bulldog Hanover’s send-off at Mohawk can make arrangements to see him in person.

“Absolutely, we have an obligation that if they want to come and see him, most definitely. We would request a call ahead of time, just so we can make sure that there’s someone there who can show him. We welcome people who want to see him. That’s part of our job as well, to be able to show him off on behalf of the owners and his new syndicate. We’re happy to facilitate that.”

Taking a gamble in Bulldog Hanover’s initial, double-duty year at stud proved rewarding for his connections, for Seelster Farms, and particularly for the breeders of his first-crop foals, said Straatman. “I’m so happy for those that supported him in his first year. I congratulate them for having walked down the rainbow to gold.”