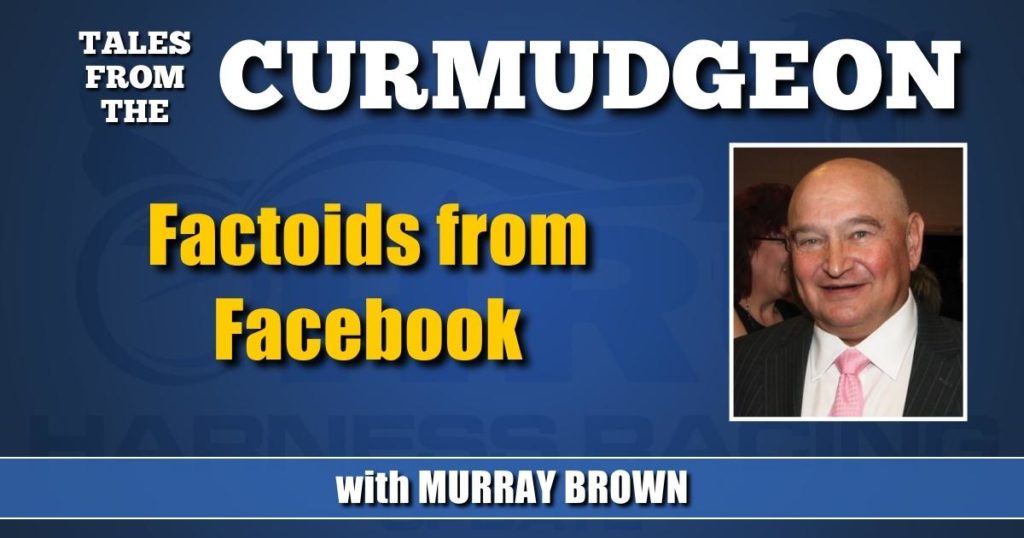 As some of you may know, this scribe wastes a considerable amount of time on Facebook. After all, what else does an 81-year-old retired gent have to do with a surplus amount of spare time. I read — and perhaps too often — initiate some of the numerous topics discussed on that website. Most of which I write about there relates to harness racing. I thinki some of my best and most significant writing appears there. I would be remiss if I didn’t also mention that my writings sometimes are not the best and can get me in trouble. That’s part of the reason why I am called The Curmudgeon.

This week, I thought I would impose on my readership to rehash what I believe to be some of my most interesting Facebook posts and comments.

Last Sunday Dr Nena Winand posted a lovely picture of Bettors Delight romping in his paddock. The back story on this is Nena owns Lady Mattgalane($378,257). She rescued the mare in foal to an unknown percheron. She raised her foal, now a yearling, that she calls Cantore to become a pleasure horse. Given that Lady Mattgalane is in the best of health, she decided to breed her to So Surreal. As sometimes happens, she did not catch. She is now booked to Bettors Delight in 2023. Nena posted a picture of her consort to be.

Me on Bettors Delight:

“I remember evaluating him as a yearling 23 years ago. Back then we had what we called a Diamond Session on the Sunday night to start off the sale. It was part of my job to pick the 70 or so most appealing yearlings to be sold that evening. I chose him as one of them. He was just a little fella, small, but correct. I thought to myself, ‘It’s early, he’ll grow by sale time.’ He might have grown, but not much. I remember receiving a couple of comments on sale day as to why there was a runt in an ultra-select session. I don’t remember exactly what he brought, but it was a more than a decent price. He was bought by John Grant, Brad’s father. I think he might have bought the colt mostly because Mr. Grant had owned his dam Classic Wish who was a good race filly for him. Bettors Delight was her first foal. A decent number of good horses came from that session, but that ‘runt’ was the best of them all — both on the racetrack and in the breeding shed.

“Here’s something about Bettors Delight and Western Hanover: Their respective first crops were generally not liked when receiving their first training lessons. The feedback we received was not positive, They were thought of as sulky and disinterested in their work. I recall Charley Karp returning from the Florida training centers telling me: ‘The Artsplaces (who also had his first crop out that year) look fantastic. But the smartest thing that Hanover could do with Western Hanover is to make a gelding out of him. The trainers don’t like them at all.’ Well, Charley, you were right on the money with Artsplace.”

“Alcohol Free, a multiple Grade 1 winning filly sells today at Tattersalls (Great Britain). Some think she may become the highest-priced female ever sold at public auction. She is sired by harness racing’s Ice Wine Stable’s former star No Nay Never. No Nay Never stands at Coolmore in Ireland for a stud fee of 175,000 pounds sterling. Hall of Famer to be Frank Antonacci is still involved in his ownership.”

After watching the Valley Victory and the Kindergarten final :

“If Volume Eight had a bad week (as quoted of trainer Noel Daley), I would pay admission to see him when he has a good one. A simply breathtaking colt!”

On the same horse:

“If I’m Diamond Creek or Hanover — or anybody else looking to stand a great trotter in Pennsylvania — I’m trying to get him locked up right now for his stud career after he’s done racing — whatever it takes. Maybe I’m wrong, but I think he could be easily syndicated — even at a crazy price right now. Some might say he hasn’t raced enough and they might be right. But he has raced enough to get my vote for Two Year Old Trotter of the Year. I’m not quite crazy enough to do it myself, but if someone else did, I wouldn’t be the slightest bit critical of them.”

More on Volume Eight and beyond. In response to a query about the colt’s maternal family:

“His maternal family means nothing relative to his becoming a successful stallion or not. Of course, I would much sooner have a maternal family considered superior than one that is not. However, in the game of studs, lots more stallions of superior lineage have failed than those that have made it. That applies to all stallions — good or bad maternal families.

“After more than 60 years of studying pedigrees I’ve found that the one trait that most successful stallions possess is performance. That doesn’t mean that all well performed horses will make great stallions — far from it. Even most of those racing on a top level won’t make it. But there are very, very few ordinary racehorses that become successful sires. Some might argue that an ordinary horse won’t get the opportunity. They would be right of course, but only to a degree. I’m of the belief that the horse destined to become great will do so even with only a modicum of opportunity. However my definition of greatness might not agree with that of others.

“Back to Volume Eight’s maternal family. Actually his family is pretty decent — not really all that current or commercial, but pretty acceptable nonetheless. The main reason for that is because the horse’s breeder, Bob Key, retained and raced almost the entire family, through successive generations, One of the great trotters that trace to that family is Greyhound.

“Throughout the history of the breed the few truly great stallions do so based entirely on their genetic makeup. A multitude of beautifully bred and well performed horses have been abject failures in the stud, while there have been a few considered lacking in pedigree that have been superb.

“One such horse was Albatross. When he went to stud, I forget how many family generations in his maternal family were blanks, but there were several. The family was considered to be so bad that Hanover, which had several members of it, emptied their broodmare band of them. Nevertheless, Albatross stood alone — maternal family be damned. Before him the best performer from the family had been Dudley Hanover. Since him there have been very few if any notables. For a period of about 10 years Albatross was the greatest pacing stallion in the world.”

Another little vignette on Albatross:

I often was the proverbial fly on the wall when Mr Simpson happened to be having his almost daily conversations with his friends and business associates. Before I go any further I need to make one thing abundantly clear. In my opinion Delvin G. Miller was the greatest all around horseman that the breed has ever known – trainer, driver, owner, breeder, even racetrack builder and owner. As a breeder he had more knowledge and greater instinct than anybody I’ve ever known or known of. Back to being the fly on the wall. Delvin and Mr Simpson are having a conversation about Albatross around the time that the horse had arrived at Hanover. Delvin says “Johnny let me tell you something Albatross will be a great sire of colts, but I don’t think he will sire any good fillies. I’ve trained fillies from every generation in his pedigree. There was not a single one of them that was worth a bucket of warm piss”. Of course Albatross became the greatest filly sire of his generation and one of the greatest ever. Which goes to prove that even the best of us can make errors when it comes to the eternally challenging puzzle of horse breeding

Facebook periodically sends its contributors reminders of posts which were sent previously. This is one which I received last Tuesday. The original post appeared six years ago:

“Congratulations to everybody associated with Easy Lover Hanover on his win in last night’s Progress Pace.

“He was an absolutely gorgeous yearling, as Dottie Haughton would sometimes say ‘a real mouth waterer.’ But his dam at the time had been oh for three at even getting her first three foals to race.

“Nevertheless, he was so beautiful that I could still see him bringing a decent price – maybe something in the $40-$60 thousand price range.

“I recall Tony Alagna coming to the fairgrounds and me telling him that we had a gorgeous Somebeachsomewhere yearling that I thought he might be able to ‘steal.’ Tony ended up buying him for $100,000.

“Right after he sold, Tony came up to me and said, ‘You’re the reason I bought him, you better come in for a piece.’ I answered that I thought he’d bring half of what he did. Nevertheless, I did come in for a piece, but a small piece.

“He raced at 2 and took a record. Never in my wildest dreams did I see him as a stakes colt. He raced fairly well at The Meadowlands (at 3) last winter and was entered in Tattersalls Winter sale at The Meadowlands. I thought of him as a nice raceway prospect. I would have been more than satisfied if he brought $40,000 to $50,000. Instead he brought an astonishing $70,000. I looked upon him as being well sold. That was the second time he brought a price that surprised me.

“In retrospect he turned out to be a great bargain. I couldn’t be happier for his connections — owner Brad Grant, trainer Ben Wallace and driver Doug McNair.

Here’s an update on the now retired Easy Lover Hanover. He went to Canada where he turned into a top Saturday night special in dominating the upper classes on his way to earning over a million dollars in Canadian funds.