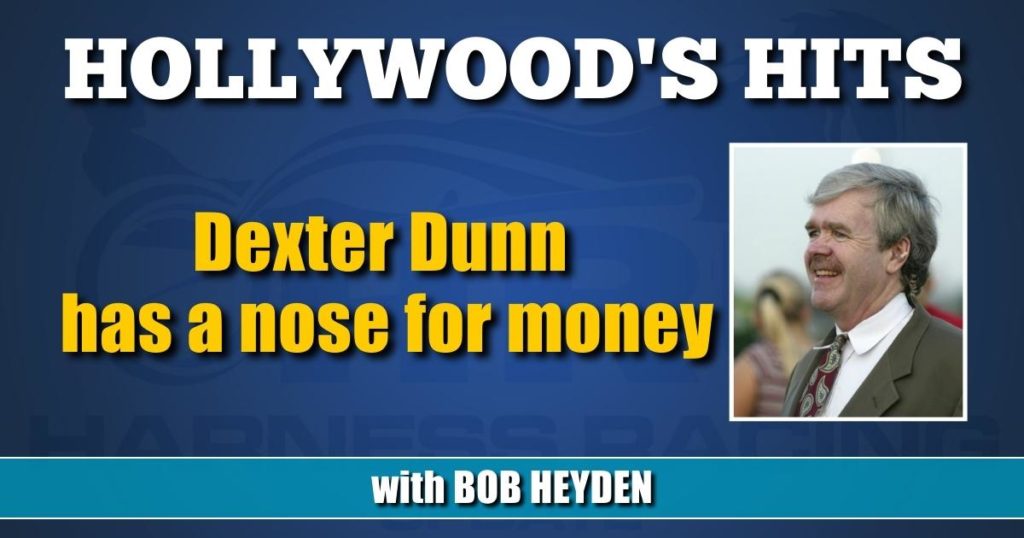 Dexter Dunn has a nose for money

The leading driver in North America in earnings is well positioned to win his third straight Driver of the Year title.

Just how much of a money driver is Dexter Dunn? He entered December #1 in North America with earnings exceeding $15 million, but only ranked 31st in wins with 289.

In the past three years, Dunn has been the driver of the HOY runner-up:

This would be the fourth straight year Dunn has been the driver of the horse that finished either first or second in the HOY race.

The record for consecutive years that a driver has finished 1-2 in the HOY race is six buy Stanley Dancer.

Dunn was born on Sept. 1 1989. That means John Campbell has been the all-time leading driver by earnings for every second Dunn has been alive. Campbell took over the top spot in 1987 and still leads with just shy of $300 million in career purse earnings.

DAN PATCH NOTES THROUGH THE YEARS

• Bill O’Donnell drove back-to-back HOY winners — both sophomores and one of each gait. He won with trotter Fancy Crown in 1984 and Nihilator in 1985.

• Forgotten filly? It seems so. Areba Areba was actually the 1980 2YOFP award winner over Fan Hanover 144-78. She also remains the only filly to appear in a $2 million race, finishing fourth in the 1980 Woodrow Wilson won by Land Grant for a purse of $2,011,000 for Team Kopas.

• Rambling Willie holds the distinction for the most top 10 finishes in HOY balloting with six:

• Bulldog Hanover is the fastest and the best. But that is not always the case. Only in the following years has the all-time record holder also been voted Horse of the Year:

• Shadow Play is about to become the eighth sire of a HOY in the 21st century who did not win a division title himself.

2017 Swan For All — Hannelore Hanover

• Is there any award to be given to a horse who defeats two Horses of the Year? Lady B Fast did it with Nevele Pride and Fresh Yankee in 1969 and 1970, respectively. Armbro Dallas did it in the same race in 1985 — $770,000 Pilgrim — upending both Forrest Skipper and Nihilator in the latter’s next-to-last career start. But a special award has to be given to Jefs Eternity who defeated 1981 HOY Fan Hanover, but also Cam Fella in 1983 at Freehold. She was the only female to ever upend the “Pacing Machine.”

• Three Horses of the Year on the same card? Yes, in 2002 at the Meadowlands, Gallo Blue Chip, Bunny Lake and Real Desire raced.

• Jack Darling going into the Canadian Hall of Fame the same year as winning the Horse of the Year award? Is there a precedent for this? Yes there is.

• She wasn’t HOY and she never made it past her 2-year-old season, but her name lives on. We just passed now 64 years since the passing of Merrie Annabelle on Nov. 30, 1958. She was the 2YOFT award winner of that year and the freshman fillies have competed in a race named in her honor since. Merrie Annabelle the racehorse was the season’s champ on a half-mile track at 2:05.2, with a 2:00 mark on the mile track. She won the American National, the Hanover Shoe Filly Stake and the Hoosier Futurity (Tie Silk second) as well as the Saul Camp Memorial at the Red Mile.

• Which horse had the fewest North American starts one year and still made the top three in HOY balloting? Varenne 2001 had two starts. Bunny Lake won the award that year 68-34 over Syrinx Hanover. Varenne got 28 votes in a solid showing.