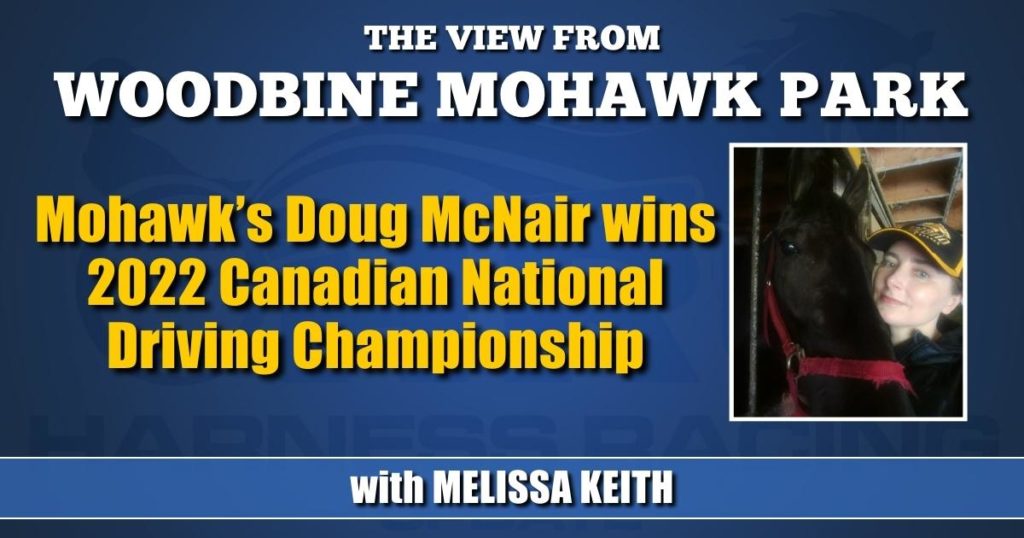 Doug McNair is currently second in the Woodbine Mohawk Park drivers’ standings, with 258 victories in 1,419 starts this year. But he was second to none on Thursday night (Nov. 24) in Edmonton, AB, finishing on top in the 2022 Canadian National Driving Championship (NDC) at a track where he had never previously raced.

“We flew out Wednesday [Nov. 23] morning, so we landed right about noon on Wednesday, Alberta time,” McNair told HRU. “Wednesday evening, we went on kind of a beer tour and visited the West Edmonton Mall… It’s nothing like a regular mall. It’s pretty special. If you’re ever out there, it would be a place for people to go see.”

The 32-year-old horseman was also new to Century Mile, although he had competed in southern Alberta. “I’ve been to Calgary a couple of times to race, but I was never up to Edmonton,” he said.

The surface and facilities left a good impression, even before he started winning races.

“When I first showed up, there were a couple of people that were already out there [driving at Century Mile], and they were telling me how nice a job they did out there,” said McNair, referring to the fast, well-maintained track. “When you see it for yourself, it’s probably one of the longest stretches for a mile track that you can possibly have. It’s almost terrifying if you look at it from head on; it’s a pretty long stretch.”

That made Century Mile a fresh challenge. Although the Guelph, ON driver regularly competes on one of the country’s biggest tracks, -mile Mohawk, he said the differences in track layout meant changes to strategy in the NDC.

“This track’s completely different from Mohawk: It’s a mile track, so you’re leaving into the first turn even faster than you would at The Meadowlands, because it’s right there, and it’s such a long stretch. It’s tough to get them out of there from the outside, as opposed to Mohawk, where you get almost a quarter-mile after you leave the gate, so it’s more racing early at Mohawk than there would be at this track.

We’re going into the first turn at Century Mile within the first five or six seconds. They’re pretty tight turns… At Mohawk, we’ve got almost a quarter-mile straight when we leave the gate, so if you’ve got one of the faster horses when you leave the gate, they get a pretty good straight to get crossed over in time. There [at Century Mile], even if a horse is not that fast off the gate, you can kind of keep them in position.”

The first two races of the card were not NDC races.

“They just put us on those horses to get us used to the track and gate and stuff, the guys from out of town,” said McNair. He finished off the board with 11-1 Outlaw Tootsieroll in race 1 and 8-1 No Bettor Parade in race 2. “The first one I drove, I gave it a good trip and it finished fourth. I drove the second one really bad, so I couldn’t blame that on the horse.”

A strong start worked to McNair’s advantage in the first NDC races.

He went gate-to-wire with 3-5 top choice Jayden Riley in race 3, and repeated with a winning front-end trip for 1-9 favorite Oriental Express in race 4.

McNair said those two horses improved his chances when he got them in the NDC horse selection draft last Sunday (Nov. 20).

“They draw your name randomly: some races, you’ll get to draw first, and then you’ll draw second, all the way to eight. The second one [Oriental Express], race 4, I drew him first. When I got out there [to Alberta], one of the boys who drove him said, ‘That was the pick of the tournament, really.’”

Race 5 went to three-wide closer Blue Powder and Western Driving Championship runner-up Dave Kelly, over McNair’s 7-1 shot Subzero. The place finisher was 20-1 in the morning line, but cut the mile and was barely outsprinted to the wire.

“There was kind of a little bit of talk out there – the boys were surprised that horse [Subzero] got going,” said McNair, who sent the pacer to the front right off the gate. “I didn’t do anything special. He just was comfortable that night. I guess he had breathing issues, and he didn’t have much of a shot to shut his air off. I was down to the half in :54.4 with him. That’s one of the biggest halves you can go around there. I’m just lucky to get some money with him. When I saw the half, I was really thinking we weren’t going to get a whole lot of money.”

McNair landed another longshot in race 6: Ceia When I Ceia, sent off at 11-1.

“This was Rod Hennessy’s horse. [2022 Western Driving Champion] Mike [Hennessy], who was in the tournament, told me all about the horse, and we were off the gate real well. We followed the best or the second-best in the race, and finished third. We did as good as we could, points-wise, with that one.”

Unlike Woodbine Mohawk Park, Century Mile’s best post positions are on the inside.

“When you have the #7 or #8 hole, it’s tough to get checks,” he told HRU. In race 7, “the horse [12-1 Dialmeup] raced good out of the #8 hole. I think I got away third or fourth with him. I was first up heading into the last turn and hung on for third. Dave [Kelly] wasn’t too happy: He won the race [driving Suellen Hanover] and he trains the one I was driving, so he was happy to win but when he saw his horse was third, he wasn’t real happy. He’s happy to be cashing the check though.”

Going into race 8, McNair hadn’t missed the board in a single NDC race. He guided #7 Litizor to an unexpected 5-1 victory.

After six NDC races, the Mohawk regular had widened his lead to 69 points, ahead of second-place Dave Kelly (52 points) and Quebec/Eastern Ontario championship runner-up Pascal Berube (39 points). His biggest upset was yet to come, in race 9:

“It was funny… The [NDC] draft was early Sunday morning. I didn’t have the program pages, I was just going off my phone, on speakerphone, trying to pick the horses. They got to the second-last [race] and they called my name out second, and I was surprised… I didn’t think it was my pick yet, but I said I’ll pick anyway, and I picked Captain Mike Deo.”

He instantly regretted his decision: the gelding had just one win this year, March 3 at Woodbine Mohawk Park.

“I got stuck with him in the end, and the boys kind of ribbed me about him all week. The joke was on them when he ended up winning! If you look, you wouldn’t think he had much of a shot last night, but that’s horse racing–you never know!” said McNair, who finished the tournament with 91 points, ahead of next-best Dave Kelly (69) and Pascal Berube (46).

“I’m looking forward to it. It should be a good trip,” said McNair, who returned from Alberta Friday afternoon. “I went over to France to race and to Sweden for the Worlds a couple of years ago [2019]. We actually landed in Germany, waiting about an hour to get on the next plane, so I didn’t get to tour around Germany or anything, so it will be the first time for those three countries.”

McNair won the 2018 NDC at Grand River Raceway, ending up a close fourth in the 2019 WDC, just 10 points behind winner Rick Ebbinge of Netherlands, who edged out American representative Yannick Gingras.

Being based at Canada’s leading track was an advantage going into the NDC, said McNair. The Ontario Regional Championship has no horse draft.

Mohawk is also a magnet for driving talent nationwide, making every card a proving ground for newcomers and established reinsmen.

“They’re the cream of the crop here – that’s where all the money’s at, in Canada, so that’s where the top guys are,” said the NDC winner. “There’s obviously good drivers out east and out west, who don’t want to move their families or for different reasons, so I’m not saying they couldn’t race at Mohawk, but it’s a tough tournament to win in Ontario.”

McNair said his NDC victory came down to the horses he drafted all meeting or exceeding expectations. “The way it set up, I actually thought I had a really good line-up. I won with some horses I didn’t think I’d win with, and I got a horse or two I didn’t think I’d get beat with, so it all worked out in the end. I’m just happy it worked out.”