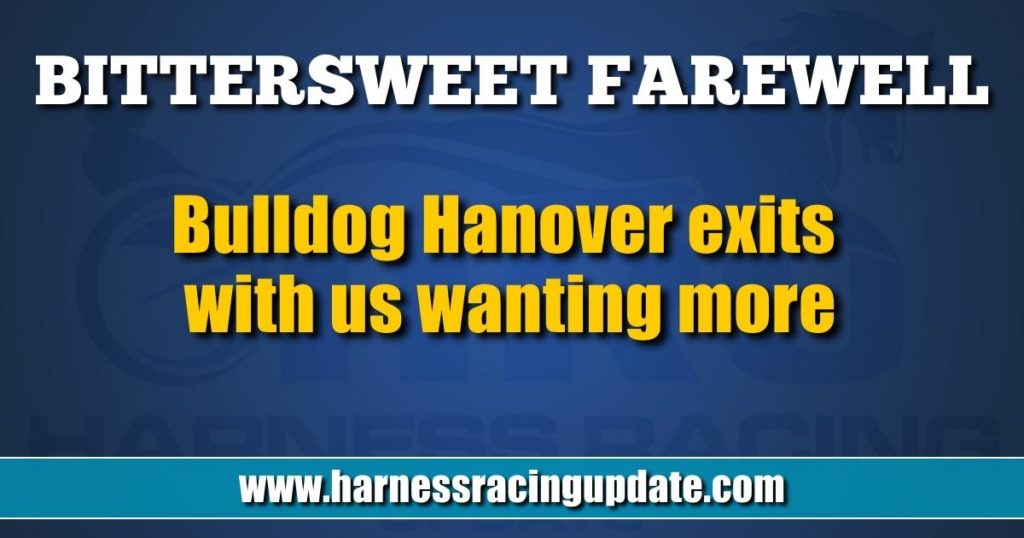 The fastest standardbred in history — and presumptive Horse of the Year — retires from racing how he will long be best remembered: by dominating a race at The Meadowlands.

So, this is how it ends.

Perhaps a hitch in the throat could be blamed on a late-night snack. For sure it suddenly was a little dusty as the clock slipped past 10 p.m. Saturday night and Bulldog Hanover (Dexter Dunn) rumbled away from the field to post a 1:47.3 stakes-record victory in his racing career denouement at The Meadowlands in the $345,000 TVG open pace.

Bulldog Hanover leaves the racetrack likely in the rarest of company with such pacing immortals as Niatross and Somebeachsomewhere.

What is indisputable, beyond a Horse of the Year crown on both sides of the U.S./Canada border, is that Bulldog Hanover has been the hero harness racing has desperately needed: A magnetic, gobsmacking talent blessed with the lungs of the greatest free diver, the speed of a Ferrari and a compelling backstory minus any troubling question marks.

Sired by an unfashionable stallion (Shadow Play) and the 12th living foal out of an aging mare (BJs Squall), hip# 795 Bulldog Hanover was plucked out of the Hanover Shoe Farms consignment at the 2019 Standardbred Horse Sales Company yearling auction in Harrisburg, PA for a mere $28,000.

Meaning, many could, just as easily, have signed the slip.

The man that did the plucking is much-respected Ontario-based trainer Jack Darling, now 69. Darling, something of a harness racing lone wolf with a keen eye and a finger that soon will sport a Canadian Horse Racing Hall of Fame ring, has about as many horses in his barn as one can count on that one ring hand.

All of which hopefully stokes the hope that fuels the grand harness racing dream.

Contrary to popular belief, you don’t need owners with pockets as deep as the Mariana Trench and an 80-horse barn full of blue-blooded, six-figure yearlings to end up with one of the greatest horses of all time.

Which, beyond otherworldly ability, is another reason Bulldog Hanover developed a strong fan following across many states and provinces.

“It’s an emotional thing,” Darling said in October. “So many people come up to me and congratulate me and talk about Bulldog. Their admiration for that horse is so sincere and the look on their faces and in their eyes, it’s so genuine and it’s really touching. It’s pretty special.”

That the 4-year-old Ontario-sired pacer retired from racing with career earnings of just over $2.4 million and a record of 28-4-1 in 37 starts over three racing seasons is really the fine print. What is more impressive is the speed in which the Bulldog Hanover did his work.

He owns four of the nine fastest miles in harness racing history and of the 15 horses that have won a race faster than 1:47, only two — Bulldog Hanover and Allywag Hanover — have done it more than once. Allywag has done it three times. Bulldog has turned the trick six times, including the fastest mile in the game’s very long history — a 1:45.4 eye-popping, jaw-dropper on July 16 at the Big M that came despite throwing his right front shoe. Afterward, Bulldog Hanover kept chugging for nearly another half-mile.

“When you watch them going across the wire, you see that if they went another quarter mile that they weren’t going to get to (Bulldog Hanover). He’s just got unbelievable stamina,” Darling said in July.

“And then I noticed when he was coming back to the winner’s circle that he was flying. He’s just unbelievable that way. There’s just no end to him.

“It’s not like it was a fluke or (Bulldog Hanover) got lucky. He just did it and you just always get the impression, ‘Jesus, maybe there’s another tick or two in the tank.’”

Add in that Bulldog Hanover came into the race off three straight weeks of scintillating miles of 1:47, 1:46 and 1:46.1 at The Meadowlands and it all comprises the most impressive four-week stretch by any horse in harness racing history. Despite Bulldog being a Canadian boy owned and (mostly) campaigned by Canadians, The Meadowlands was the right spot for his final race. After all, the Big M was where he did his most impressive work.

That Bulldog Hanover went on from his monstrous Meadowlands month to win the Dan Patch at Harrah’s Hoosier Park in 1:48.1, tie the 1:46.4 Canadian all-time record with a win in the Canadian Pacing Derby at Woodbine Mohawk Park and then add another 1:46.4 mile while winning the Breeders Crown open pace, also at Mohawk, is the stuff of legends.

Only a loss to Allywag Hanover in the Allerage Farm open pace at the Red Mile could be considered a mild disappointment.

Along the way, Darling, a man who excels at the unemotional business side of the game, found himself increasingly emotional watching Bulldog Hanover’s exploits.

“When I started out, I was just so happy to be able to race,” he said, pausing to compose himself. “I just get a little choked up. Never would I have dreamed I’d get involved with a horse like this.

“I had a tear in my eye as he was hitting the wire (in the world record mile). That’s unusual for me, but it’s pretty exciting. It’s strange for me to say, because I always treat this like a business, but in this case it’s not about the money. It’s just all about the horse.”

Bulldog Hanover’s team —which includes Dunn, the horse’s former driver Jody Jamieson, co-owner Brad Grant and caretaker Johnny Mallia — are similarly emotionally invested, of course. But for Darling, Bulldog is the horse of a lifetime.

“I’ve been around a long time and this is kind of a nice way to go out. I know I’m not going to top this, so I’m just going to try to enjoy it,” Darling said in September.

In the winner’s circle Saturday, Darling told Jessica Otten: “He has a way of pulling at your heartstrings. Warming up tonight going on the track it was very emotional. He’s just that kind of a horse. He’s so classy. He has the personality. He’s just a special horse.”

“Certainly, we’ve been fortunate enough to breed very, very good horses, a few horses you would even say are great, but to breed the fastest one of all time… and not only the fastest, but to breed a horse that is so dominant and is doing things so easily. He is a true superstar. People want to watch him race. He’s drawing attention and he’s getting some attention outside the sport,” said Jablonsky.

“He is an exceptional horse. He was a terrific yearling… He was a 9 out of 10. I rate them 1 to 10 and he was a 9. He was a very, very good yearling in the barn. He had energy, but not nasty. If you were to ask me my favorite pacing colt, I would have put him at the top even though he was a Shadow Play. He was one of the best-looking pacing colts we sold that year.”

Darling said Bulldog Hanover has been the perfect pupil.

“If a horse can have a perfect personality, that’s him. For a stud, he’s very calm. Around the barn, he’s perfect. Take him out to jog him and you couldn’t ask for a nicer horse to jog. He just goes about his business, ears up. Training? He trains perfect and does exactly what you want. If you speak to him, he’s gone. The big trouble is that once he gets going, he wants to stay going and it’s a little hard to get him pulled down.

“He has superior constitution. He never gets sick. I don’t think he’s been sick a day in his life… He doesn’t get tired. He’s never missed a meal.”

Now Bulldog Hanover will return to the breeding shed at Seelster Farms in Lucan, ON where he bred 79 mares last winter before returning to the track. A limited number of shares are available and Bulldog Hanover’s service fee for 2023 — the second of a three-year deal with Seelster — will be $15,000 USD.

For the well-respected, family-run breeding farm, it’s a chance to stand another stallion with the stature of the late, great Hall of Fame stud Camluck and further not only the Canadian breed, but the standardbred one everywhere.

That there will be little Bulldog Hanovers zooming through paddocks before too long is some consolation, I guess.

But it will never match the thrill of watching the horse with the modest origin story transform into a faster-than-a-speeding-bullet harness racing superhero.