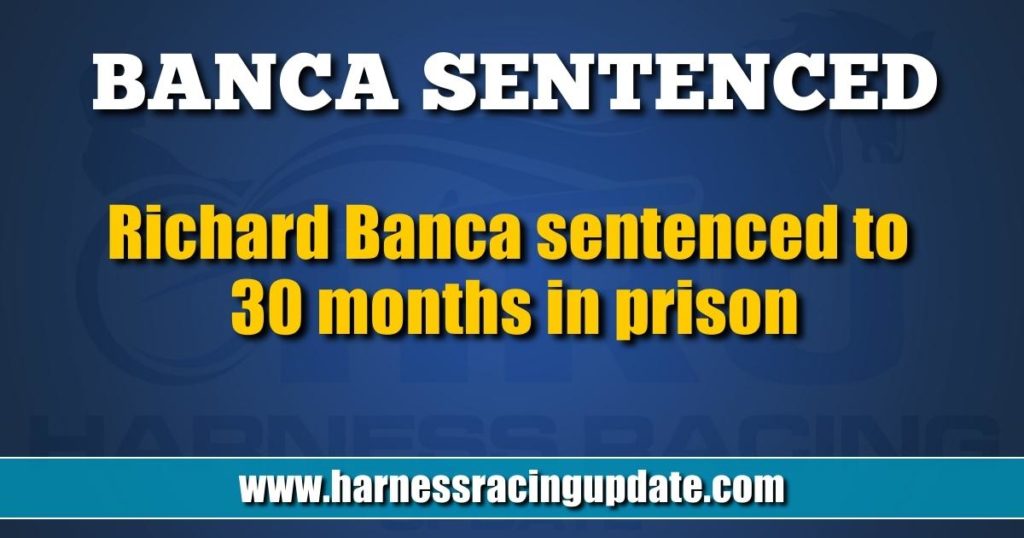 Former standardbred trainer Richard Banca was sentenced to 30 months in federal prison after pleading guilty to one count of drug adulteration and misbranding. Banca was among the more than two dozen individuals nabbed in a widespread investigation into doping in thoroughbred and standardbred racing.

Rene Allard, Thomas Guido III, Donato Poliseno and Louis Grasso were named in the same indictment as Banca and have pled guilty. They are scheduled to be sentenced at later dates.

The government had asked the judge to sentence Banca to 36 months while Banca’s defense team had asked for a sentence of home confinement followed by probation.

“Richard Banca was a prominent racehorse trainer whose success was founded on fraud and deceit. Banca’s racing program — which he built and helmed — was predicated on a scheme to obtain and administer illegal, unsafe, and unapproved performance enhancing drugs to racehorses under his control. Banca orchestrated this deceit in service of greed, namely, to increase the odds that his horses would win races, thus earning him greater fees and income,” the prosecutors wrote in their pre-sentence filing.

The government’s pre-sentence filing continued: “First, it is not the case that the defendant’s crime was the result of a single lapse in judgment, confined in time and scope. The defendant engaged in a years-long, sophisticated, and lucrative scheme to corruptly win horse races. Until his arrest, Banca earned his livelihood through his ‘doping program,’ which touched all the horses under his care and control. And that doping program carried serious risks to the health of the horses under his care. Banca’s claim that his horses did not ‘suffer any injury’ as a result of his doping is simply incorrect.”

Banca wrote a letter to the court apologizing for his deeds. It read: “I would like to start with telling you I’m sorry for what I’ve done. I’m sorry for breaking the law. I’m sorry for what this has done to my family. I never thought I would ever be in trouble with the law. I know I have made mistakes, but I have taken the last 2 ½ years to do right.”

When Banca was indicted in March of 2020, the court documents regarding his case include a deposition from FBI agent Bruce Turpin, who linked Banca to Grasso and Conor Flynn, who were among the 27 indicted. Turpin testified that Banca’s property in Middletown, NY was searched and that the FBI found a number of illegal substances and handwritten notes with instructions on how to administer those drugs. Turpin laid out a scenario where Flynn, Grasso and Banca worked together to illegally administer drugs to horses.

“I have learned that Grasso has, on multiple occasions, supplied Flynn with adulterated and misbranded performance-enhancing drugs for Flynn to administer – or deliver to others to administer – to racehorses,” Turpin testified.

In further testimony, Turpin reported: “Based on my discussions with an agent who has spoken with a confidential source, I have learned that Flynn has stated, in substance and in part, that Flynn administers horses owned, trained, or otherwise under Banca’s control, with PEDs at Banca’s direction.

In 2011, Banca was sanctioned by the New York Racing and Wagering Board for Oxymetazoline violations and given a 90-day suspension and a $1,000 fine.

In a related development, Lisa Giannelli, an associate of Dr. Seth Fishman, has appealed her conviction and sentencing. Giannelli, one of only a handful among those indicted on doping-related charges to take their case to trial, was sentenced to 30 months in prison and was also ordered to pay a fine of $100,000 and to forfeit $900,000.

Fishman was sentenced to 30 years and is currently locked up in a Florida prison.