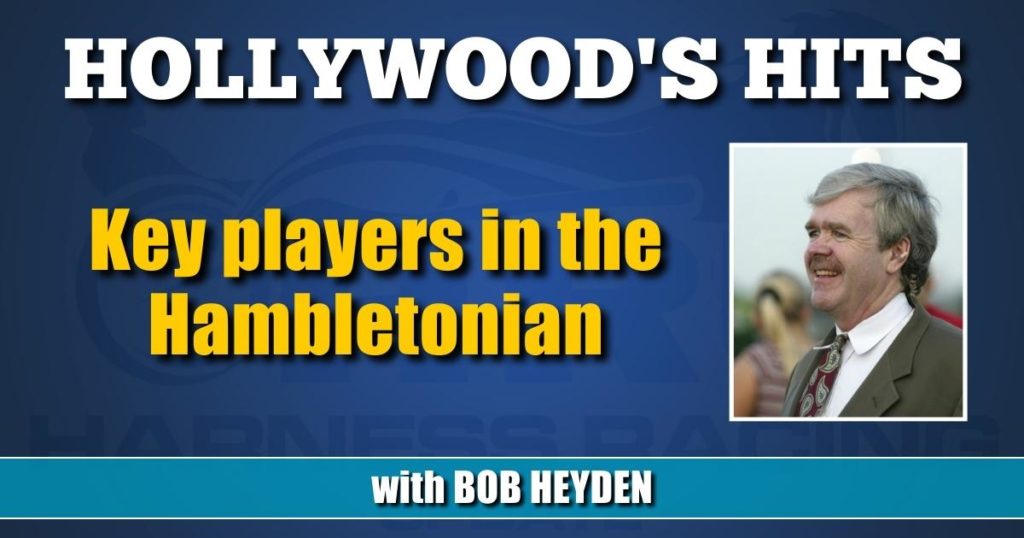 Key players in the Hambletonian

Lucas Wallin, trainer of the Hambletonian favorite Rebuff, is in the very unusual position of having driven in his first Hambletonian (2021 Cuatro De Julio) before having a trainee in the race.

Will he or countryman Swede Marcus Melander, become the sixth Swede to win the Hambletonian?

If so, Wallin or Melander would join:

Tim Tetrick is looking for his second Hambletonian 10 years after he first won it with Market Share.

Rebuff’s part-breeder Steve Stewart is trying for yet another Hambletonian win to go with the ones he had in 2014 with Trixton and in 2019 with Forbidden Trade.

All three of Brian Sears’ Hambletonian wins came while he was in his 40s:

All three of the Hambletonian-winning drives for Sears also won their eliminations.

Joviality has very similar past performance lines as a sophomore as Duenna did coming into the Hambletonian:

Joviality’s previous four races before last week were at Vernon twice and Yonkers twice. Duenna had raced at four New York tracks in five starts prior to her 1983 upset — two at Buffalo, one each at Monticello, Roosevelt and Saratoga.

The last time a filly won the Yonkers Trot and then tried the Hambletonian was in 1996 when Continentalvictory set a two-heat 3:45 world record while winning the Hambletonian.

At a win rate of 79 per cent, Joviality is the only Hambletonian finalist over 50 per cent lifetime in 2022.

Chapter Seven is trying to join Stars Pride as the sire of two Hambletonian-winning fillies (he had Atlanta in 1958). Stars Pride had Emilys Prise in 1958 and Kerrys Way in 1966.

The year 1975 was the first year betting was allowed on the Hambletonian Oaks.

Jim Campbell and Joe Holloway were the only trainers on the 2022 elimination card who also were active on the Mack Lobell 1987 Hambletonian Day card 35 years ago. Campbell had Freight Saver and Holloway had Banker Blue Chip.

It’s been 14 years since the top three finishers in the Hambletonian were all USA born trainers:

In 2008, Ray Schnittker was first and third. Frank Antonacci was second.

It’s been 34 years since John Campbell went back-to-back as a driver in the Hambletonian. Since then, 11 times the winning driver did not appear the following year — of the 22 that did, zero won, three finished second and one third.

The last trotter to have a $2 million season did so thanks to the last Hambletonian that went for a purse of $1.5 million — Market Share in 2012.

Can anyone remember who the first horse that Mal Burroughs raced in the Hambletonian? Not Malabar Man the 1997 winner. He owned J Ds Tryst who in 1982 broke stride early and was ninth in his heat.

Bill O’Donnell won with Prakas in 1985 in a record 1:54.3. I guess you could say his first four Hambletonian drives were just warn-ups:

Jason Bartlett will come into Hambletonian Day as the #1 money-winning driver in North America. It has proven to be something of a Sports illustrated Jinx, though, to the Hambletonian drivers. Only Tim Tetrick in 2012 with Market Share has won both the Hambletonian and the money title in the same year in the 21st century.

Orjan Kihlstrom at 60 will try to be the oldest first-time Hambletonian winning driver in Meadowlands history with Temporal Hanover:

If you added up the U.S.-born trainers in the last five Hambletonians you would not have a full field. Just nine of the 50 finalists (18 per cent) have been trained by American-born conditioners.

ONUS ON THE OAKS

If Venerable wins the Oaks, trainer Nifty Norman would become the only trainer ever to win the Oaks back to back twice.

He won in 2012 and 2013 with Personal Style and Bee A Magician, respectively.

Wallin could capture both the Oaks and the Hambletonian.

Bar Hopping would be the first sire in the 52-year history of the Oaks to sire the winner from his first two crops.

If Pink Coco Chanel wins the Oaks, Cantab Hall would get his third Oaks credit. He won it back to back in 2014 and 2015 with Lifetime Pursuit and Wild Honey.

Nancy Takter won the 2020 Oaks and is the only trainer with two shots in 2022 with Selfie Queen and Mon Cheval (her dam Shake It Cerry was fourth in the 2014 Oaks).

If Bare My Soul wins the Oaks, driver Yannick Gingras would record his record seventh Oaks.

Brian Sears won the Hambletonian and the Oaks in 2013 with the favorite in both — Royalty For Life and Bee A Magician.