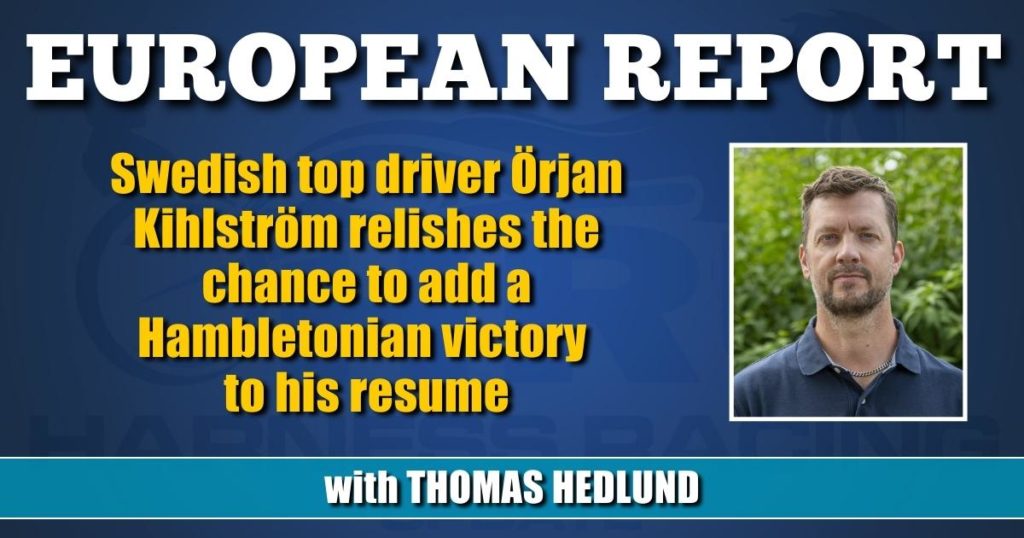 A victory Saturday with Temporal Hanover would make him the first driver to win the Hambletonian, Elitloppet and Prix d’Amerique.

Swedish top driver Örjan Kihlström has been in the harness racing game since he was a young child. The Kihlström family was well known in the business and it was more or less obvious that Örjan, born in 1962, would devote his life to horses and harness racing.

Much can be said about Kihlström and why he has reached the position as one of the best harness racing drivers in Europe, but one word comes to mind to describe him: humility.

His success on the track has never changed him and he often credits his magnificent career to all the great horses he’s been privileged to drive throughout the years.

Kihlström has been called ”the king of big races” in Sweden and somewhat jokingly it is said he never really wakes up until the purse surpasses a specific high amount in the races. That is the exaggerated hype about him, because Kihlström is a top professional in everything he does and whatever race he’s driving in.

Saturday, he will be back at Meadowlands to race Marcus Melander trainee Temporal Hanover in the Hambletonian. Last week, Kihlström crossed the Atlantic and qualified the trotter for the $1 million final with a second-place finish in his elimination that was just a head back of winning filly Jiggy Jog S.

“It’s very rare that you get to drive such a good horse in a race like this and in addition, the schedule back home in Sweden suited me well these two weekends,” Kihlström said. “That is one of the biggest obstacles for me driving in other countries — the schedule with all the horses I drive in Sweden.”

“I already knew that he’s a really good horse, a complete trotter who is easy to drive and what I learned from the race Saturday was that he just simply is as good as I thought. I’ve never had such a great shot in Hambletonian before, so this will be very exciting for me.”

However, Kihlström has tasted success on American soil before. Even as a trainer he tried his luck in The International Trot at Yonkers in 1990. That time it ended with fifth-place finish, but Kihlström has also won some prestigious races in the USA. In 2014, he steered Commander Crowe to victory in the $500,000 Breeders Crown at The Meadowlands.

“I’ve driven some big races in America before, Hambletonian included, and it’s exciting to experience these kind of race days.”

Kihlström is one of the best-known European drivers in North America and he said the Hambletonian is one of the three biggest races in the world to win.

“For us Europeans, or Swedes, the Elitloppet is really big and that’s the race many drivers and trainers dream about to win. And then we have Prix d’Amérique, obviously. But the Hambletonian is as big as the other two races and, with 21 years of reflection, Scarlet Knight’s and Stefan Melander’s win in the race in 2001 was a big feat, hard to repeat for anyone today. That was just an amazing victory for the sport and I guess it will be very tough for someone else to achieve something like that again,” Kihlström said.

A victory on Saturday would put Kihlström in unchartered territory. He would become the first driver to win the Hambletonian, Elitloppet and Prix d’Amerique.

“It seems like people in the business keep up with what’s going on in Europe and yes, they seem to recognize me when I’m at The Meadowlands. I’ve come to know some of the drivers in America in connection to Elitloppet and World Driving Championship and they’re all super professional guys who are very good drivers.”

As for racing in America, Kihlström said it is a bit of an adjustment.

“First of all, we barely have any mile tracks, so it starts there with some differences in how to drive. I also notice that the driving culture is quite different from Europe,” he said. “But it just requires you to watch and learn and I can promise that all the top drivers in America would adapt to the Swedish system pretty quickly if they started to race there more frequently.”

Kihlström said the first North American driver he was impressed with was one of the legends of the game.

“Before the Internet and everything, when you had to visit the tracks to see new horses and drivers, I got to see Joe O’Brien and he really had something extra when he drove a horse. Then, some years later, John D Campbell showed up at Solvalla and he is probably one of the best drivers ever in the sport. And I must say that all the top drivers that we see in America today, they’re all very talented,” Kihlström said.

Biggest wins in his career: