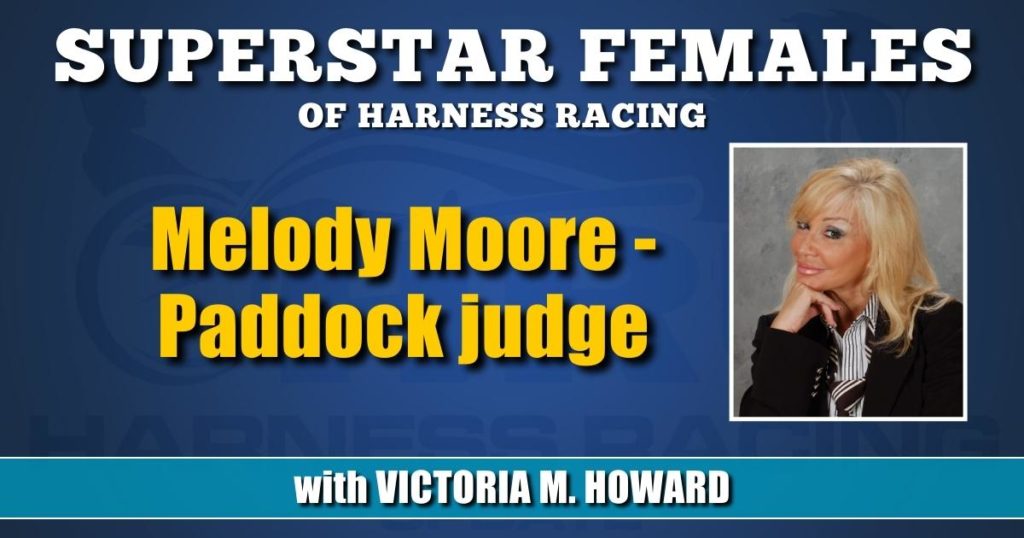 Growing up in Michigan young Melody Moore never in her widest dreams thought one day she would be a judge. But today Moore is exactly that. She is the paddock judge at Running Aces Raceway in Columbus, MN.

“I did not grow up in the racehorse industry. My family was not involved in harness racing, but my granddad raised and trained Appaloosas so I learned a lot about horses working with him. If I wanted to ride, I had to do the barn work first.

“I grew up in Fowlerville, Michigan — home of the Fowlerville Fair — where I got to watch the Michigan fair stakes. Being competitive by nature, a horse lover, and intrigued by horses going very high speeds in a cart I wanted to learn more.

“When I was a young adult a friend who worked with standardbreds asked if I wanted a job. I said, ‘Heck yeah!’ and I was hooked. My first job was cleaning stalls for trainer Keith Crawford in 1987. After Keith I worked for the (late) Jay Sears for about three years at Pompano Park in Florida and Vernon Downs in New York. I owe Jay so much for he really taught me the ins and outs and let me train and warm up my first horse.”

Moore also worked for trainers Mark Capone in the ‘90s, taking care of some very nice horses, including Kentucky Image, Styles Hanover, Orchard Street and Getting Personal, who was a two-heat world record holder at Vernon Downs and the winner of six New York Sires Stakes track records. Melody also worked for trainer Linda Toscano for a short time.

“At one time, I worked for Michigan trainer Mark Jordan. This was my favorite time for I took care of the great Supergrit. He won $1.5 million in purses and won the Maple Leaf Trot and Breeders Crown, to name a few, and he had seven wins in a row in the free-for-all trot at the Meadowlands. He got beat a nose going for his eighth, which would have tied Garland Lobell’s record. After Supergrit’s retirement I went to work for Richie Johnson where I cared for, shipped and warmed up Quality Western, also a world record holder.”

“I taught the babies how to lead and pick up their feet. It was a fun job. During this time frame I began putting together a small stable of my own. I moved to Saratoga and had a pretty successful few years for my owners.

“I owned and trained the trotting mare, Fox Valley Shannon, who made her way up to the open class. To keep her competitive I put her in a claiming race, and she was claimed, putting me pretty much out of the business.”

For the next eight years, Moore took a sabbatical from the sport to raise her daughter and clean up a divorce, but her heart was always with the horses and harness racing.

“In 2019, I answered an ad on Facebook. Trainer Homer Hochstetler was looking for help and I jumped back in. I worked at Vernon and Pinehurst for a season, but after COVID hit, I moved back to Michigan where I made a new contact with Robert Baurys and Crazy Parrot Farms.

“Robert sent me a few nice mares to race at Northville Downs. We did okay so we discussed going to Running Aces and I took a shot.”

Which brings us to the present day where Moore is now the paddock judge at Running Aces.

“Throughout my training career, I always had aspirations of becoming a judge. I knew that there were very, very few women judges in the sport, and being the competitive and risky person I am, I thought it would be a challenge.

“Mickey Peterson, an associative judge in harness racing, was a good friend of mine. He always supported my dream and gave me pointers and suggestions.

“In 2022, I saw an ad on the USTA website looking for a paddock judge. Although I had zero experience, I reached out to Steve Carpenito, the director of racing at Running Aces. Not long after, Steve contacted me with the job details and offered me a job as paddock judge with the stipulation that I pass the judges’ test under the tutelage of Robert Corey – the presiding judge at Running Aces.

“After speaking with Carpenito and Corey on a conference call, they both agreed I was a good fit for the job and confident that with my experience in the business I could fulfill the job.

“At that time, I had a small stable and had two months to make a life-changing decision to either keep training or take a chance on fulfilling my dream of becoming a judge.

“I talked to my owner, Mr. Baurys, and asked his opinion. He told me I shouldn’t turn the opportunity down for it was a chance of a lifetime and if I didn’t like it I could always go back to training.

“I accepted the position and arrived in Minnesota at the end of April.

“I studied very hard and passed the test. April 26, 2022 was the first day I was the paddock judge at Running Aces.

“It has been quite a change for me, and a bit trying at times, but I have a super support system in Mr. Corey, Peter Hanley, Casey Larson and Mickey Peterson, and of course thanks to Steve Carpenito for the opportunity. They have all taught me such much already and I am forever grateful. I hope I make them proud and letting all the women in the business know to follow their dreams and hard work does pay off.”