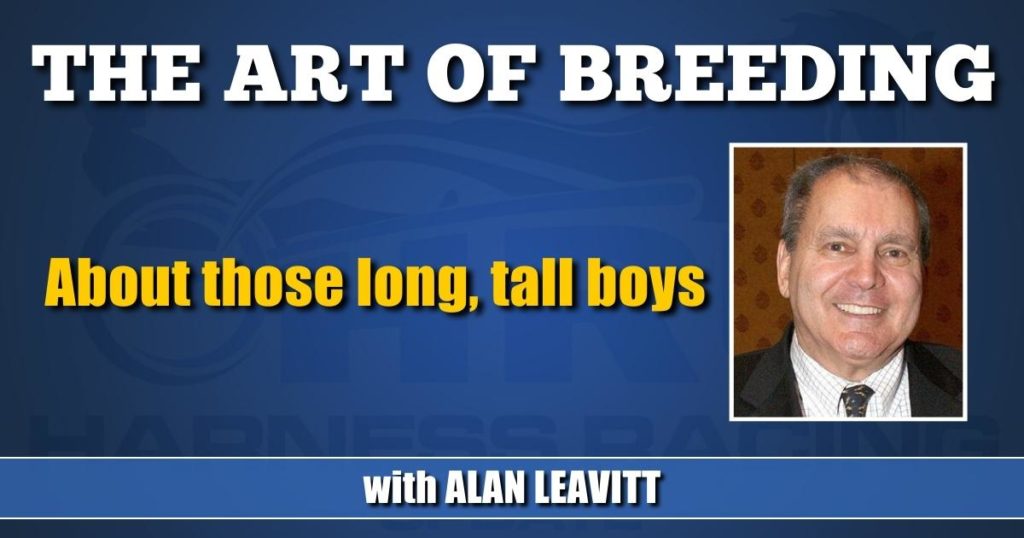 About those long, tall boys

There were two fillies entered in this year’s Hambletonian eliminations, which brings up the question of why this is such an infrequent occurrence.

There I think the principle expressed in Occam’s Razor gives the best answer. Which is: Trotting colts are bigger and stouter than trotting fillies, and therefore they are faster.

(RE: Occam’s Razor, a principle attributed to William of Occam, simply says that in most cases the simplest explanation is the best.)

This is not to say that there haven’t been fillies in a given year who could hold their own and then some against the colts. There just haven’t been very many of them. In the case of Joviality S, her trainer, Marcus Melander, was good enough to give me a first-hand description of his filly. In her case, bigger and stouter don’t apply. Melander told me she is on the small side, and quite feminine.

I’ve already remarked on the great success both Marcus Melander and Lucas Wallin have achieved in the relatively short time they’ve been here from Sweden. As it happens, I met Melander’s charming sister, Mikela, when she was
here at The Red Mile taking care of the mercurial Greenshoe. Now I’ve just learned that the transplanted Swedish
Circle is complete, as Mikela Melander and Lucas Wallin
were married in April. I wish them both a hundred years of happiness.

The Hambletonian was first raced in 1926, and in its second year, 1927, the winner was a filly, Iosola’s Worthy, driven by Marvin Childs. Many years later, as I was just getting started, Childs was employed by Hanover Shoe Farms to prep their sale yearlings. I attached myself to him, and he gave me my early education in our business.

He also told stories about the old days on the racetrack, where he and his contemporaries had all become legends by my early days. I mean names such as Nat Ray, Walter Cox, Tom Berry, Doc Parshall, Ben White, and on and on in the same vein with the list of giants who created our sport.

Among the many stories Childs told me, he described how things worked in the early, pre-pari-mutuel days. All races were in heats then, and the race winner was the first horse to win two heats.

This was before the starting gate was invented in 1939 making modern day harness racing possible. Before the gate was introduced, the field would come to the start in a line, and if everybody was lined up properly, the starter, standing on the side of the track, would drop his flag and the race was on. However, it frequently would take a whole afternoon to get a race off.

This kid has colorful memories of George Morton Levy. He could never understand how I would always take the side of the owners and trainers in the never-ending battles over what percentage of the betting handle should go to purses.

Levy would start at something like 18 per cent, and then grudgingly work his way up to the low 30’s. And he never stopped asking why wasn’t I on his side, since we were the only two people in these discussions with a higher education, plus a shared religion, Judaism.

Now both Mr. Levy and Roosevelt are gone, and I’m probably the last person who knew both the man and the place first hand. When the time comes, fingers crossed, he’ll be waiting to berate me some more for my misplaced loyalty.

The starting gate was the key to commercial harness racing, but there was another small but essential piece that appeared first in the late ‘50s.

That was the plastic wheel disc. Before it was created, every day or night there were serious accidents when one horse would put his foot through another horse’s wheel. If you’ve ever actually driven in a race, in every turn you hear the loud bangs as horses whack each other’s wheel discs. In my early days those same feet would be going right through the spokes of someone else’s wheel.

On a personal note, I just had a phone call from Brad Maxwell, one of the best trainers in the business. He was giving me a report on a horse he’s training for us, and, and as usual, he’s doing a top job.

But being 5’6” on my tip toes, I’m quite conscious of other people’s height, especially when they’re tall, as Brad is. It brings back a memory of my early days in the show horse world. Two of the top men in the business then were Tom Moore, who was well over six feet, and Garland Bradshaw, who was my size.

They were showing yearlings, in hand, at the Kentucky State Fair one night, and the judge had them lined up side by side, so he could do his comparison.

As the judge stepped over to look closer at Garland’s
yearling, out of the side of his mouth, sotto voce, Bradshaw whispered, “This long, tall boy don’t need the money, judge, but I sure do.”

There have been many times in my life since when I’ve told an imaginary judge that those long, tall boys don’t need the money, judge but I sure do.

But I’m never sure if my message actually gets through.