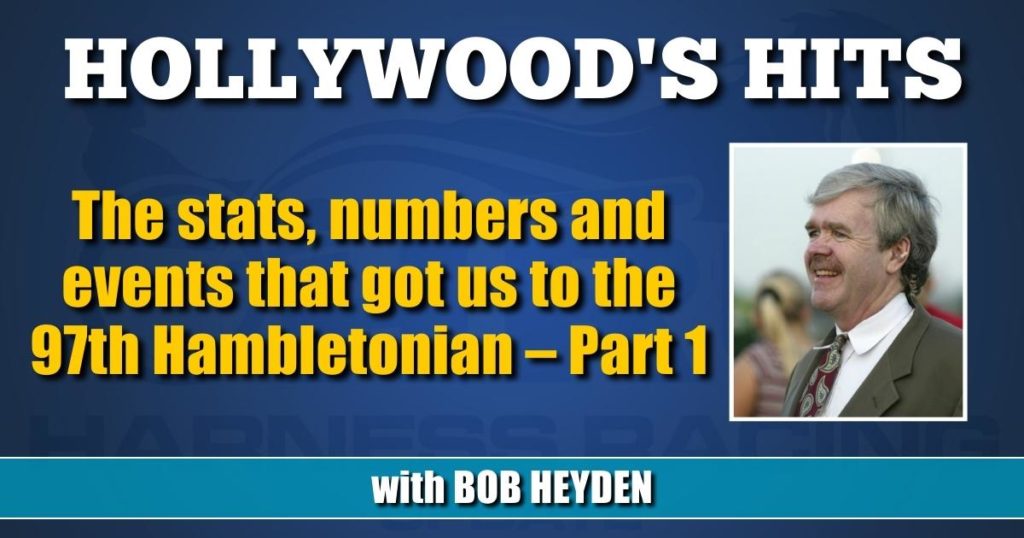 The stats, numbers and events that got us to the 97th Hambletonian – Part 1

The stats, numbers and events that got us to the 97th Hambletonian – Part 1

1. Each of the last 12 Hambletonians has had at least one first-time Hambletonian driver. Lucas Wallin 28 and Mattias Melander 23 drove in the past two years.

2. The last eight Hambletonians have gone to four Swedes, three Canadians and one American-born trainer.

3. Todd McCarthy can be #5 on the Hambletonian all-time list of Mc-winners if he is victorious this year. In 1931, Dick McMahon won with Calumet Butler. In 1992, Mickey McNichol won
with Alf Palema. In 2019, Bob McClure with Forbidden Trade and in 2020 Andy McCarthy won with Ramona Hill.

8. Chapter Seven looks to be the third sire to win two Hambletonians — with a filly. He had Atlanta already and has Joviality S in this year. If so, he would join Stars Pride (1958 with Emilys Pride and 1966 Kerry Way) as well as Peter Volo (1930 with Hanovers Bertha and 1932 with The Marchioness).

–9. Forty-one Meadowlands Hambletonians (18-of-41) have been sired by a Hambletonian winner.

11. 1981 was the only year in Meadowlands Hambletonian history that trainer/drivers got all five checks: Ray Remmen, Howard Beissinger, Carl Allen, Archie McNeil and Mike Zeller.

12. Rebuff and Joviality. Never before have the two Hambletonian favorites been the two freshman Breeders Crown winners from the year prior. Note: 1988 was shaping up that way, but Valley Victory got a virus that ended his career and Peace Corps was short in the dead heat year.

13. Ake Svanstedt looks to join Per Eriksson and Jimmy Takter as Swedes with at least three Hambletonian credits.

14. 2022 is the 35th anniversary year of Takter’s Sir Taurus debut in the Hambletonian (no money).

15. Ray Schnittker remains the only driver to make over $1 million in purse money in his first three Hambletonian drives.

16. Tim Tetrick (Rebuff) will become the first driver to compete in the Meadowlands Pace and the Hambletonian in the same year 16 straight times (2007-2022).

17. In 2006, the then fastest ever Hambletonian elim winner (Here Comes Herbie, 1:52) got no money in the final. In 2004, the dominant elim winner Tom Ridge, also got no money come final time.

18. Andrew McCarthy had quite the Hambletonian Day in 2020 when he won with Ramona Hill in the big one and five times on the day — kind of like David Miller with Triple Crown winner No Pan Intended in 2003 at the Jug with 10 wins on the card.

20. Bill O’Donnell’s 1985 Hambletonian Day will forever be tough to top. The same day he set the Hambletonian mark of 1:54.3 with Prakas, he also set the all-time race mark of 1:49.3 with Nihilator.