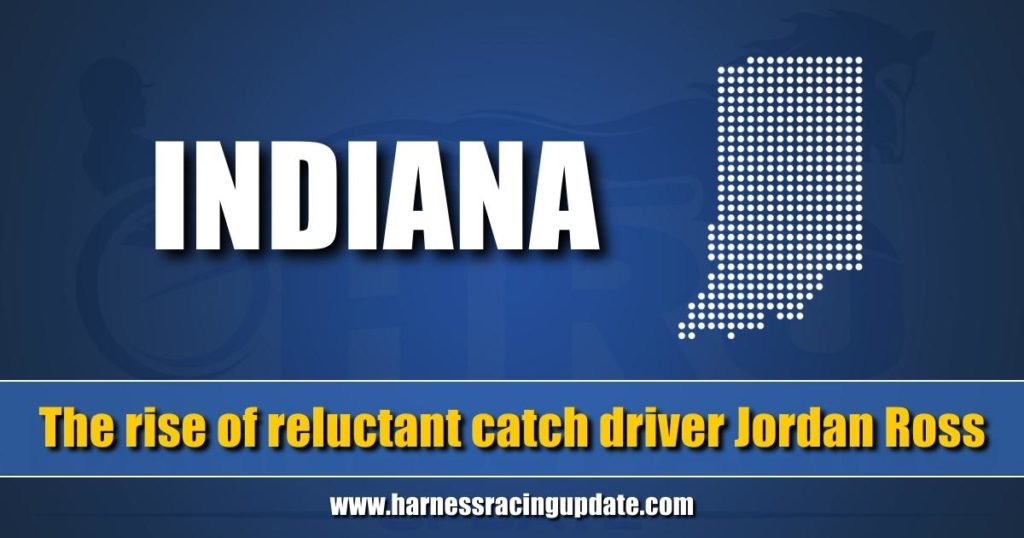 Jordan Ross did not have aspirations of becoming a catch driver. In fact, after the loss of his grandfather and horseman, Graham Ross, he stepped away from the business for a time. The Covington, TN native was lured back to harness racing a few years ago, and the 24-year-old is gaining valuable experience in the bike and producing wins. Racing at Harrah’s Hoosier Park Racing & Casino and the Indiana fair circuit, Ross is putting together a banner season.

“I love it, it’s been going well at both the fairs and Hoosier. I’ve just been driving better all around. Just getting more comfortable being behind horses and learning how to rate a horse,” Ross said of his improved statistics. “I’m learning which horses like to be on the front and which do not. I’m getting the feel of it, and that has a lot to do with it.”

Ross made his first starts as a driver in 2015 and 2016, lining up behind the gate five times each year. That first season he collected a quartet of third-place finishes. The next year, he notched three wins, each on the Indiana fair circuit. Fast forward to 2021 and the young driver collected 49 winners in 422 starts, with purse earnings of $490,376, each a career mark. Ross is on pace to break each of those standards. He has already surpassed his win total of last year with 60 scores in 315 attempts. His $445,906 in purses to date put him in line to exceed the $500,000 milestone for the first time.

From an early age, Ross was immersed in racing through his grandfather, who campaigned horses in Illinois. Graham Ross operated a modest stable, serving as owner/trainer, and his grandson spent a good deal of time around the barn and the racetrack.

“He had a pretty big stable. We had a stable of 15 or 20 horses at times. We raced Springfield, Balmoral and the fairs in Illinois,” Ross said.

When his grandfather died, Ross took a sabbatical of sorts. It was Larry Poindexter, a close friend of Graham Ross, that encouraged Jordan to come back to the business. Poindexter purchased a couple of horses, sending them to trainer Robert Taylor. Taylor and his father were also friends of Jordan’s grandfather. Upon his return, Jordan went to work in Taylor’s barn.

“Larry bought a couple of horses and brought me back to it. That’s when I started helping Spence (Taylor). He let me drive here and there, and I fell in love with racing again,” said Ross.

The up-and-coming horseman would have been content to work as an assistant trainer, but Poindexter suggested Ross drive competitively, an idea he was reluctant to pursue. The owner, also from Covington, was persistent, though, and the two struck a deal.

“Larry talked me into it. I told him that if he bought the colors I would try it. He said, ‘Well, if I buy them, I get to pick the colors.’ I said okay, that’s fine,” Ross said. “We’re the Covington Chargers, and our high school colors are purple and gold with a lightning bolt. Larry’s a big basketball fan, so he just went with the hometown colors.”

Ross and his unmistakable gold lightning bolt are visiting winner’s circles with increased regularity. Last season, the reinsman finished in the top five on the Indiana fair circuit as a driver. A chance opportunity steering trotting filly Swan Fine Lady for trainer Mervin Schmucker in 2021 led to a new relationship that is paying dividends.

We clicked that way,” said Ross.

He guided Swan Fine Lady to victory in the $25,000 Governor’s Cup Championship at the Indiana State Fair last August, winning by more than two lengths. Ross picked up another championship victory with Northern Network, a sophomore pacing colt owned by Poindexter and trained by Taylor.

“I’ve been trying to get a little better each year,” he said of increasing his success at the fairs. “When I started out at the fairs I would get a start or two every now and then.”

This season, Ross and Schmucker have teamed for 15 wins on the fair circuit. The driver currently ranks second in the standings with 37 victories, registering wins for multiple trainers. At Harrah’s Hoosier Park, he is slotted 15th in the standings, with 18 wins – the same number he collected in the 2021 meet – and just over $270,000 in earnings. His biggest win of the season came last week in Indiana Sires Stakes action, where he steered the Taylor-trained Jusmakinyalook to a 1:53.4 score July 20 in a $47,500 division for sophomore trotting fillies. Ross counts the daughter of Pinetucky, which he works with daily at the barn, as his favorite horse.

“I’m going to have to go with her, just because she’s not an easy horse to get along with. She’s kind of a complicated horse to drive, so she gives you a challenge. She’s not really a handy horse to drive,” he said.

Jusmakinyalook provided Ross with his first Indiana Sires Stakes win last season as a 2-year-old. This season, she missed the board in the first leg and raced second twice before breaking through for a win in the top series.

“She had a couple setbacks where she made a couple breaks. She’s just been a little hot, a little warm. But we’ve got her figured out now,” Ross said. “Last week she was just awesome. She raced good and got the job done; she was really nice. She’s in there with some pretty tough horses.”

Jusmakinyalook isn’t the only filly Ross had piloted to victory in stakes action. Three days after his Hoosier Park score, the driver guided favorite Apple Valley to a 1:52.4 triumph in the $50,000 Plum Peachy championship at Hawthorne Racecourse. The Major Bombay sophomore, trained by James Molitor for breeder and owner Michael Perrin, won by a length and a quarter.

If that were not enough, Ross is also training a freshman pacing filly he considers “pretty decent” that he co-owns with Poindexter. RNR Lucky Vida, sired by Luck Be Withyou, has a win and runner-up performance in two starts, taking a mark of 1:52.4 at Hoosier Park her last time out.

“My goal was to do better than last year. As long as I can get better each year, that’s my goal,” Ross said.