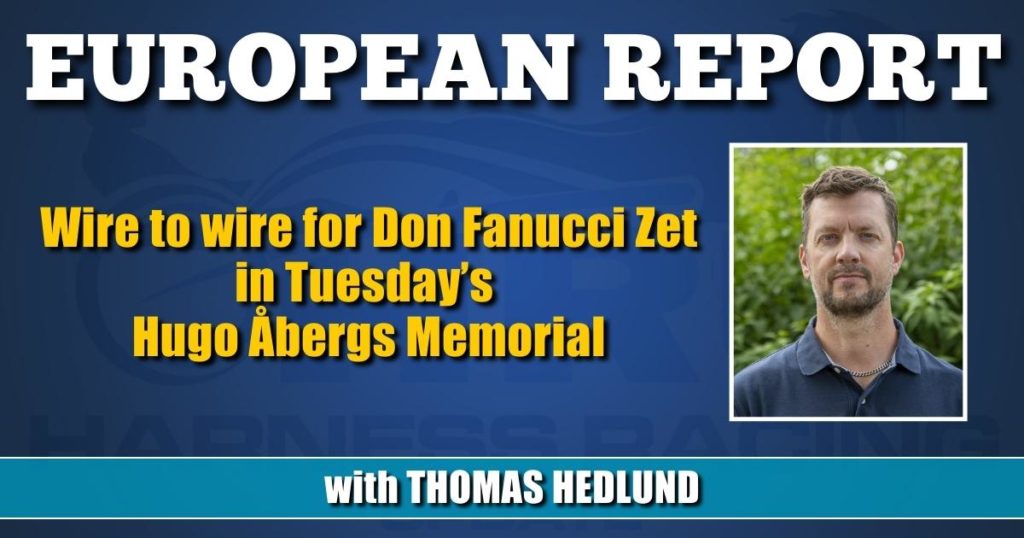 Daniel Redén trainee Don Fanucci Zet (Hard Livin) started this year’s edition of the $365,000 Hugo Åbergs Memorial from post 1 behind the gate, the same number the 6-year-old had in the final of Elitloppet, when the day ended with a break as the car left the field.

On Tuesday (July 26) night, Don Fanucci Zet opened quickly and even if the Hard Livin son was really challenged by outside trotter Click Bait, Örjan Kihlström managed to keep his position in front with Don Fanucci Zet.

After a quick first quarter, Kihlström was allowed to keep the pace down until the last turn, when Click Bait tried an attack from second over. Don Fanucci Zet was full of power in Kihlström’s hands as the field turned for home and it was pretty clear that Don Fanucci Zet was unbeatable this night in Malmö.

Daniel Redén’s star trotter sprinted to safe win in 1:52.2, while Stoletheshow finished strongly between horses as runner up, ahead of Önas Prince, who was served a trip behind the leader all the way.

”This is just amazing, standing here on this magic night in Malmö with a homebred trotter,” Redén said. “Don Fanucci Zet was on his highest level at Elitloppet day and it’s hard to keep that shape for a long time. But he’s always doing great performances and today I had to figure out what to have on his feet. He can leave, but post 1 is tricky and Örjan solved the situation.”

The second final of $155,000 Breeders Course for 3-year-olds was held during Jägersro’s big race night on Tuesday (July 26) and this year’s winner comes from Germany.

Dion Tesselaar trained first choice Gio Cash (Victor Gio) was sent to the lead and when tough opponent Barack Face challenged the leaders on the outside, Gio Cash had both strength and moral to defend himself over the home stretch.

Racing 2,640 meters (1.6 miles) two times within nine days is a tough task for most trotters and especially for 4-year-old mares.

The $465,000 Stochampionatet at Axevalla racetrack in Sweden was held on Sunday (July 24) afternoon and a world record was set. It was an amazing effort considering 4-year-old mares must qualify for the big race the week prior.

With Lara Boko in front, Great Skills in the pocket and Glamorous Rain working in position first over, the race was kind of locked as some of the drivers hesitated about their decisions during the race. Strong favorite Deborah S.H. found a position in second over and driver Thomas Uhrberg seemed satisfied with the trip, even if he probably suspected that his horse would need to do the heavy three wide work during the race’s last half mile.

Mika Forss must have been very confident behind Lara Boko in front. On the backstretch, Forss stepped on the pedal and Lara Boko opened up some lengths to her opponents, and first over trotter Glamorous Rain seemed to have problems following. Forss continued to give his horse full orders of highest pace throughout the last turn, which resulted in open way for Great Skills as the field turned for home. Daniel Wäjersten parried some bad gait steps from Great Skills’ part when he lifted her out for attack in the beginning of the home stretch and when the wire approached, Great Skills had bested the leader Lara Boko. Great Skills won in a world record mile rate of 1:56.3.

Wäjersten is one of the more promising young trainers in Europe at the moment and this was his biggest triumph as driver and trainer, so far.

Lara Boko was the runner up and Felicia Zet third.

Great Skills is owned by Bro Byggnads AB in Sweden and the owner’s colors are well known for those who are familiar with European harness racing. The red-white-yellow suit has prevailed in several big races in Europe, where the biggest triumph came in Prix d’Amérique 2018, when Readly Express, owned by Bro Byggnads AB, won for trainer Timo Nurmos and driver Björn Goop.

Paris track Enghien was in focus in France on Saturday (July 23) afternoon and it was the 3- and 4-year-old trotters that fought for the big prize money.

The 4-year-olds gathered around the track for the $92,000 Prix de Milan and the race saw a heavy favorite in Philippe Allaire-trained Izoard Vedaquais, who was the horse to beat as he sat in the front of the field.

From third over, Sebastien Guarato-trained Iway (Look de Star) was piloted by Gabriele Gelormini and the duo attacked the leader seriously at the top of the stretch. Izoard Vedaquais didn’t have his best day, gait-wise, and Allaire’s trotter was close to a break mid-stretch. Izoard Vedaquais managed to continue trotting, but couldn’t defend himself when Iway challenged on the outside.

Sebastien Guarato also claimed the trophy in the $92,000 Prix Henri Cravoisier mile race for 3-year-olds. Italian-bred Deus Zack (Victor Gio), driven by Alexandre Abrivard, left third over for a three wide attack when the home stretch began and Deus Zack captured the leader Janka Somolli just ahead of the wire to win in 1:55.2.