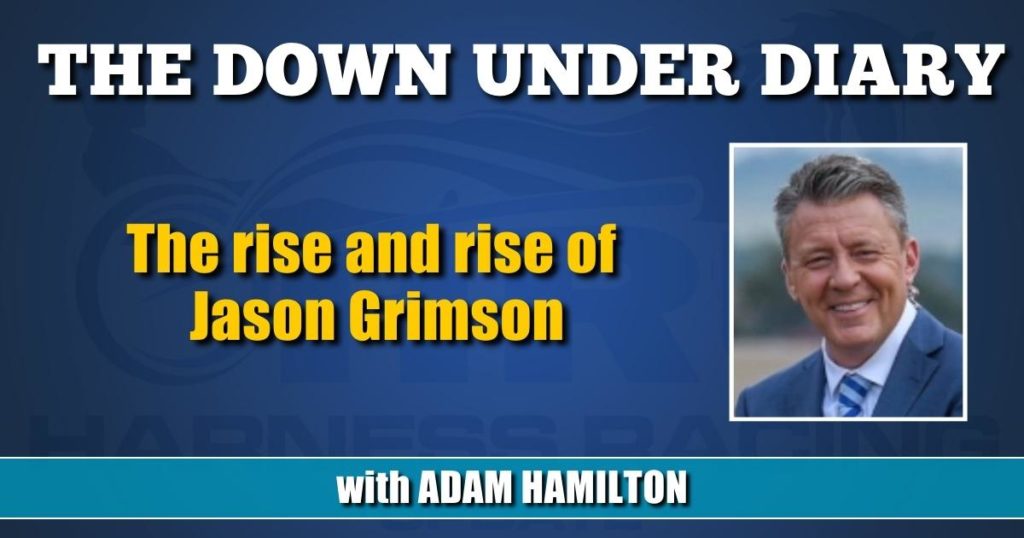 The rise and rise of Jason Grimson

Last Saturday’s win with Majestic Cruiser in the $A355,000 Group 1 Blacks A Fake at Albion Park was Grimson’s third major Group 1 victory inside the past eight months.

Jason Grimson is changing the game Down Under.

In less than eight months has gone from a virtual unknown to the single most important and fascinating player in Australia’s biggest open-class races.

It’s not silly to say he could be a once-in-a-generation trainer.

And Grimson is just 29 years old.

Born in the New South Wales heartland of the Riverina, Grimson spent three years out of the game as a concreter in Canberra before returning to the game he was born into and loves.

But it was a daring move from the Riverina to Sydney a few years back which laid the foundations of what is unfolding today.

Grimson’s “ticket” to the big smoke was actually as a driver, but training has always been his strength and calling.

Last Saturday night’s win with his favorite horse Majestic Cruiser in the $A355,000 Group 1 Blacks A Fake at Albion Park was Grimson’s third major Group 1 victory inside the past eight months.

Wedged in between that dramatic Inter Dominion final win with Boncel Benjamin at Menangle last December was an extraordinary victory against NZ’s best pacers in the Group 1 Messenger at Auckland in April.

And now Grimson has his sights set on further Group 1 glory in races like the Victoria Cup (Oct. 8) at Melton and the Victorian Inter Dominion series through November/December.

Reflecting on last year’s breakthrough win with Boncel Benjamin, who won the Sydney Inter Dominion final on protest, Grimson said: “A lot of people doubted me and the horse. It was such a great thrill.

“(The Inter Dominion) is definitely the biggest race in the industry. It’s something everybody tries to win.

“For me to win it at such a young age (28) is something I’ll never forget.

“And I’ve got a horse in Majestic Cruiser who I think can give me a big chance of doing it again this year.”

Majestic Cruiser tackled last year’s Inter Dominion and Grimson credits the four-race series as being the making of the former handy Victorian pacer, who joined Grimson deep in his career and with zero expectations.

“That series really toughened him up. He was fast but has just kept getting stronger.”

And it was that strength which has won Majestic Cruiser both the Messenger in Auckland and last Saturday night’s Blacks A Fake.

“He loves the longer trips now,” he said. “That’s why the Inter Dominion final will suit him. Four runs in two weeks and into a staying final will be ideal for him.”

Grimson’s meteoric rise, especially through the success with relatively “washed-up” horses such as Boncel Benjamin and Majestic Cruiser have sparked plenty of talk and even some jealousy amongst rival trainers.

But those who work closest to Grimson and know him well, say he’s just a rare and remarkable horseman. Some even say he’s a horse whisperer.

What does he think of that?

“I think you’ve got to have your horse happy and you’ve to know how to do that,” he said.

“I work every horse myself… I do every fast work on them.

“I’ve just got that sense where I can feel if a horse feels really good. It’s just the little things they do.

“Take Majestic Cruiser for one. He’ll always have his eyeballs popping out of his head and his ears forward wanting you to brush him. That’s when you know he’s right.”

Grimson talks about his horses, especially those he’s closest too, more like friends than horses.

“Majestic Cruiser keeps getting better and better all the time. He wants to try for you now, if you know what I mean,” he said.

“He’s definitely my favourite. I’ve become quite attracted to him.”

Beating the Kiwis – a proud and strong harness country – on their own soil with Majestic Cruiser in that Messenger meant the world to Grimson.

“It’s not very often the Aussies go over and beat the Kiwis,” he said. “It’s definitely one of the highlights of my career. He was one of the outsiders, but we made a few gear changes during the week before the race, and it definitely helped. He was a different horse on the night.

“When I think about what I’d like to go, or what my goals are, getting back to NZ again is certainly one of them.”

Grimson credits his father, Colin, a former trainer who prepared almost 300 winners, as being his biggest influence and teaching him much of his horsemanship.

“Dad was a trainer when I was little, but got out of it. He still watches all the races and is hard on me. He’s a hard judge and has probably been the biggest mentor I’ve had in the game,” he said.

Majestic Cruiser is Grimson’s flagship horse, but he also has high hopes for emerging former Kiwi pacer Fire Fox, who has so far just shown glimpses of brilliance.

“He’s a really high-speed horse. He’s probably the fastest horse I’ve sat behind for point-to-point speed. We’ve just got to get his manners right,” he said.

While the Victoria Cup could be a target for Fire Fox, the Inter Dominion is unlikely.

“He’s more of a Miracle Mile horse. That’s the target with him,” Grimson said. “He’s not a stayer, he’s a speedster. He loves the mile.

“I think he could be the next big thing for me.”

As you would expect, Grimson’s success has seen him swamped with requests to train extra horses, but that’s not on his radar.

“I’ve got about 25-30 in work now, but, if anything, I’ll cut my numbers down,” he said. “When you’re as hand-on as me, keeping your numbers down is crucial. “I want to keep my numbers small and target the big races.”