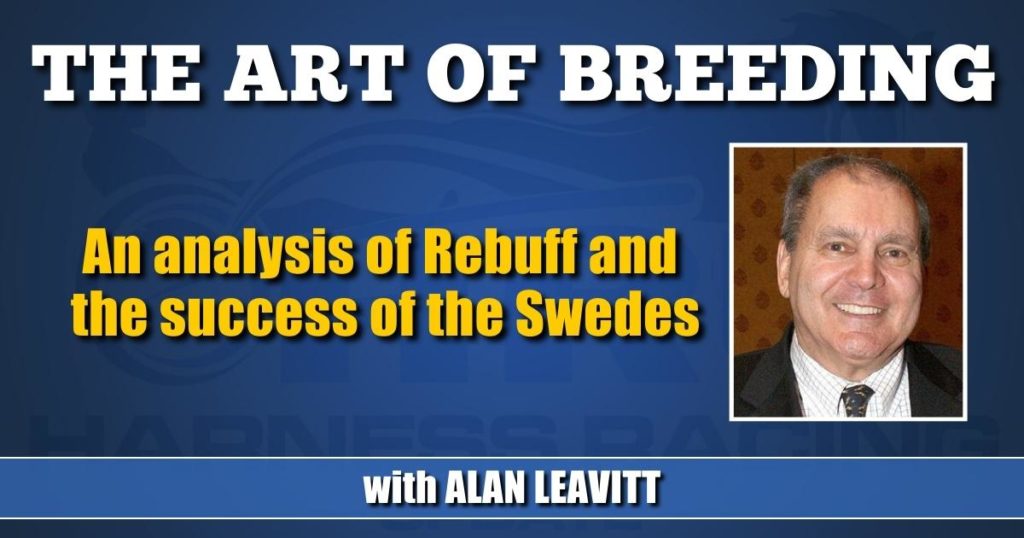 An analysis of Rebuff and the success of the Swedes

Working off a knowledgeable man’s ranking of leading Hambletonian contenders is an interesting exercise. The first thing that caught my eye was the recurring trainers’ names at the top of the list.

The top contender, Rebuff, is trained by Lucas Wallin, who also has the colt ranked eighth. The next two, plus the colt rated seventh, are trained by Marcus Melander. Both Wallin and Melander are young, Swedish immigrants to the states, and obviously both are crack horsemen.

My path has never crossed Wallin’s, but I did meet Melander when he brought the incandescent trotter Greenshoe to the Red Mile. Then, recently, he was very helpful in giving me an incisive insight into his great filly Joviality. So I have only warm feelings for him and his sister, Mikela, who is her brother’s top groom.

I’m not close enough to either Wallin’s or Melander’s training routines to know what their methods are, but I suspect the use of a straight track, or Eurostrip plays some role.

It’s no accident that these two transplanted Swedish horsemen are at the top of the game, because another Swede, Jimmy Takter, is for me one of the best trainers of all time. He not only trained and drove a Hambletonian winner, but he also trained a pacer to win the Little Brown Jug.

Jimmy and I have been good friends for more than 30 years, so I recently thought I would look up his daughter, Nancy, who has a string of horses at the Red Mile. Alas, I found her, but she was not available to talk because she was deeply involved in a cell phone conversation. I waited for a few minutes, in sight, but there looked to be no end soon, so I conceded defeat and left.

In the case of Rebuff, he is not only inbred to Valley Victory, he is also line bred, 4 by 4 by 4, to Speedy Crown. And while it is too far back to play a role in Rebuff’s pedigree, Speedy Somolli, Speedy Crown’s greatest son, appears three times in his fifth generation.

With a pedigree drenched in the blood of this father and son, we may have some clue to Rebuff’s success on the racetrack. For those who mistakenly believe that great racing performance on the tail-mare, or bottom line, of a horse’s pedigree, is the key to great production, Rebuff’s pedigree gives the lie to that belief.

To understand a horse’s genotype, one should think of a horse’s genetic profile as a deck of playing cards, with a low card of “two” and a high card of “ace.” Somewhere along that range is every horse’s speed gene.

Because Muscle Hill sires such a large percentage of fast horses, it’s obvious he always brings a high card to every conception. In an ordinary conception, Muscle Hill’s “jack” combined with the mare’s middle range card, say a “seven’, will average out to a moderately fast horse, but not a stakes winner.

To get a Rebuff, Muscle Hill brought his usual high card for his speed gene, and the mare, Meucci Madness, also came with a fairly high card, which was at the very top of her genetic profile.

I have no scientific explanation for how this happens, but by observation in more than 60 years of breeding horses it’s a fact that the great sires somehow call out the best speed gene the mare has.

Meucci Madness has been an ordinary producer of ordinary horses except that once before, with Lucky Chucky, she produced Non Stick 3, 1:54 ($587,890). Now she comes with Rebuff, with Muscle Hill. I seriously doubt that she will ever again produce world beater like Rebuff.

But if I was offered a yearling brother or sister to Rebuff at a price I could afford, you’d be amazed by how fast I’d write that check.