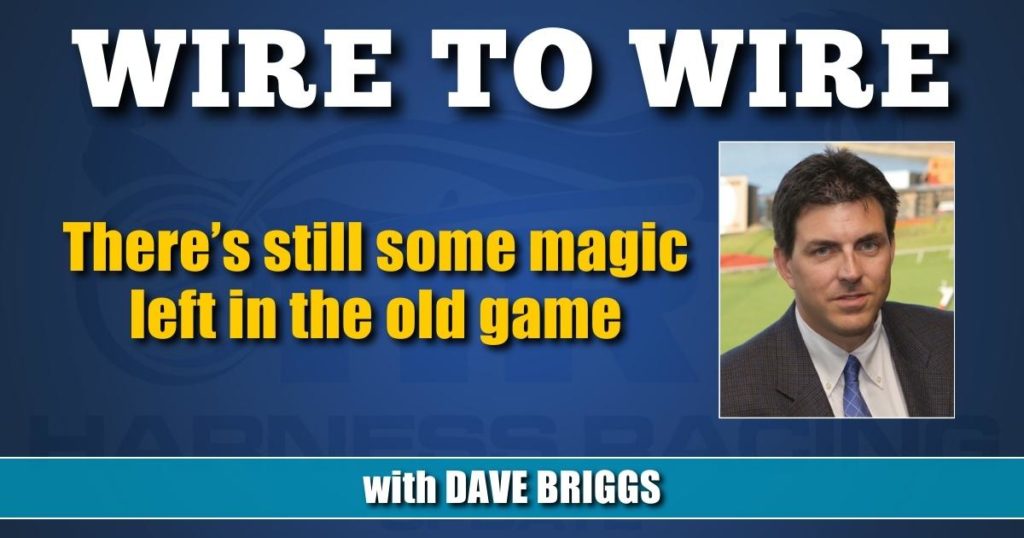 There’s still some magic left in the OLD GAME

For one beautiful evening at The Meadowlands, great horses, good guys and wonderful stories prevailed as Bulldog Hanover set a 1:45.4 world record and Beach Glass won The Meadowlands Pace for his father.

Jack Darling has always treated the business of racing horses as exactly that. He shrewdly picks out his own horses to train, tries not to overspend or get too attached or take on many partners. It’s all part of trying to maximize his own investment. So the 69-year-old Ontarian was perhaps the most surprised to find himself getting emotional watching his rock star stud Bulldog Hanover stop the teletimer in 1:45.4 on Saturday at The Meadowlands to record the fastest mile in harness racing history (replay here).

The next day, asked what it felt like to forever be associated with the first horse to record a mile faster than 1:46, Darling cried again.

“When I started out, I was just so happy to be able to race,” he said, pausing to compose himself. “I just get a little choked up. Never would I have dreamed I’d get involved with a horse like this.

“I had a tear in my eye as he was hitting the wire. That’s unusual for me, but it’s pretty exciting. It’s strange for me to say, because I always treat this like a business, but in this case it’s not about the money. It’s just all about the horse.”

That Bulldog Hanover set a jaw-dropping world record about an hour and exactly two races before Beach Glass redeemed his sire by winning the Meadowlands Pace — the only race Somebeachsomewhere did not win in his illustrious career — made it one of those all-too-rare nights. Great horses won, good guys and even better stories prevailed and for one beautiful evening the ever-increasing cloud of cynicism was dispersed by everything that makes this sport so appealing.

“I’ve always thought if you just work hard and do the right things that you can compete,” Darling said. “That’s the important part, just looking after the horse you’ve got and giving them the best care you can give them and they’ll produce.”

It is a common thread interwoven into the Bulldog Hanover and Beach Glass stories; stories that go much deeper than both horses being campaigned by Canadians.

This was about small stables and the blessing of being able to wait on talented horses to develop into great ones. It is also how one great horse can be the ultimate equalizer and the hope that brings to an industry sustained by such dreams.

Brent MacGrath, just as he did with Somebeachsomewhere, is conditioning only Beach Glass.

On Saturday, while fielding congratulations from many fellow horsepeople at The Big M, MacGrath said something another trainer said really resonated.

“Mark Capone came up to me (Saturday) night and said, ‘I’ve been doing this my whole life and I’m half-retired and I really should be buying one horse that I really, really like and give it the time, like you do, and I’d probably have more fun and more luck.”

Though, as for race nights, they don’t come much bigger than Saturday.

For one brief moment Saturday night, Bulldog Hanover was even trending on social media. That is unheard of for harness racing.

That the Hanover Shoe Farms-bred son of Shadow Play out of BJ’s Squall — driven by Dexter Dunn — set a 1:45.4 world record after four straight weeks of hard racing at The Meadowlands was incredible enough. That he threw his right front shoe doing it — and still was going full steam for nearly another half-mile or so — was astounding.

“I was a little bit nervous, because this was his fourth week in a row with tough racing, so it’s hard to be confident that he’s going to be just as sharp this week as he was last week, but I did believe if he went down to the half fast enough… especially if he got a trip where he sat in the two-hole or second cover, I thought for sure he could do it. He’s the type of horse that generally does the work himself.”

Despite a tough trip, Bulldog Hanover came home in :25.1 and was pulling away from an exceptional field in which all 11 horses recorded miles faster than 1:48.

“When you watch them going across the wire, you see if they went another quarter mile that they weren’t going to get to (Bulldog Hanover). He’s just got unbelievable stamina,” Darling said.

The trainer should know. He already had watched the replay at least 10 times and predicted he would watch it 10 more times before the day was out.

“And then I noticed when he was coming back to the winner’s circle that he was flying,” Darling said incredulously. “He’s just unbelievable that way. There’s just no end to him.

“It’s not like it was a fluke or (Bulldog Hanover) got lucky. He just did it and you just always get the impression, ‘Jesus, maybe there’s another tick or two in the tank.’”

If you’re even a D student of the game, you know that Somebeachsomewhere was one of the greatest racehorses and stallions harness racing has ever seen. You likely also know his lone defeat in 21 career races came at the hands of Art Official in the 2008 Meadowlands Pace — a race (watch it here) that stands as one of the greatest of all time.

MacGrath, from Nova Scotia, is a part-time horseman and full-time owner of several car and tire dealerships in the Maritimes. In 2006, he cobbled together $40,000 from five businesspeople and purchased Somebeachsomewhere for exactly $40,000 at the Lexington Selected Yearling Sale.

Beach Glass is one of just 28 last-crop foals produced by frozen semen after Somebeachsomewhere’s death.

MacGrath and the other members of the Schooner II Stable — Rhonda MacGrath, Stu Rath, Jamie Bagnell and Mary Louise Pye — pulled their promising stakes filly Im With Her off the track precisely to try to produce one final Somebeachsomewhere offspring. The resulting colt is Beach Glass.

MacGrath said he owes much of it to Hanover’s vice-president Dr. Bridgette Jablonsky. Somebeachsomewhere stood at Hanover his entire stallion career and Jablonsky loved him beyond measure. It was her advice that led the Schooner II Stable to take a shot at getting one final great Beach offspring.

“(Beach Glass’) mother raced okay as a 2-year-old and made $70,000 or right in that area and made money in the Breeders Crown, elim and final, so she wasn’t terrible,” Brent said. “When Beach died, I got her back around 2:10 and I was talking about flushing her and transferring the embryos and Bridgette said, ‘You know, you bought this mare (to breed her to Somebeachsomewhere) and she’ll get one shot at it. She’s the one that should be in foal, not a surrogate mother. Why don’t you put her on the truck and send her here and see if we can get her in foal? This is your best chance.’ So, we’re so fortunate. She took the initiative.”

The victory completed the circle on Somebeachsomewhere’s remarkable legacy.

“That was the one we wanted, for sure. It was a fun night and he delivered, and in fine fashion,” MacGrath said.

It is still improbable that history is repeating itself exactly here. The odds of there being another Somebeachsomewhere — especially for the same Maritime connections — are still pretty high. Though, admittedly, they are a lot lower than they were a month ago, before Beach Glass won the Meadowlands Pace. Either way, Brent is not taking any chances.

Just as he did with Somebeachsomewhere, he and his wife, Rhonda, have hit the road to personally attend to this one-horse stable. The difference this time is life is very different today for the MacGraths than it was in Beach’s heyday.

“It’s fun, but there’s a ‘but’ there. We’re 15 years older now. Our summers are pretty good and we have our place in the islands and we have a boat. We love the water and kayak and paddleboards…The older you get, the more set in your ways and the more you want to be in your own bed. But, it is exciting,” Brent said.

“This horse might be a little bit more gratifying because there were a lot of decisions that had to be made with him to get to where we got with him (Saturday), that’s for sure. It doesn’t just happen by chance. You have to see them for who they are and wait on them when it’s required… Beach was idiot proof. Put the harness on him and he’d be, ‘Get me out to the track and get me back in the barn, feed me and I’ll do the rest.’

“(Beach Glass) is not that way. He had a lot of issues that we had to work on and wait on. That’s a problem in a lot of barns because the owners are pushing and there are stake payments and blah, blah, blah, blah. We’re so lucky to have the group that we’ve got on this colt.”

THE SPORT COULD USE SOME HEROES

That both Bulldog Hanover and 3-year-old Beach Glass are just getting started is good news. The sport could use a couple of heroes.

MacGrath said he is planning to race Beach Glass as a 4-year-old. In the meantime, he said he initially thought he would skip the Adios, but has since changed his mind. If all goes well, he will then race the pacer in the Cane Pace on Aug. 6 at The Meadowlands and then the Carl Millstein Memorial on Aug. 13 at Northfield Park.

“He can take the turns as well as he can the stretches. So, I want to try the Milstein,” Brent said. “This horse loves the half. I trained, qualified him in Truro and he never wore a headpole. You know, 99.9 per cent of babies, when you start cranking them up, you feel them do something different when you get to the turns. Even if it’s before the turn, you can feel them positioning themselves a little differently. He doesn’t, nothing different, just zips around the turn like a pony. And he’s a big horse.”

The tentative schedule for Beach Glass also includes two weeks of racing during the Grand Circuit race meeting at the Red Mile and the Breeders Crown at Woodbine Mohawk Park.

“We’re going to race this horse as a 4-year-old… You look at (his maternal granddam) Hattie and that whole family and they were better 4- or 5-year-olds than 2- or 3-year-olds. I think this colt will be, too… he’s been terribly immature… That’s just who he is. He matures slower.”

Darling said Bulldog Hanover’s next start will be on Aug. 12 in the Dan Patch at Harrah’s Hoosier Park.

“He’ll get a nice breather here now and I’ll just have to get him trained up pretty good for that race. Then, I think it’s two weeks after that to the Canadian Pacing Derby here at Mohawk. Then, we’re planning on Lexington and that would be exciting to race him there and I think he’ll just love that track.”

All of which is furthering not only his racing legacy, but also his value as an Ontario stallion.

Bulldog Hanover has already completed the first of a three-year deal to stand at Seelster Farms in Lucan, ON and his value as a stud is already soaring thanks to his incredible string of racing at The Meadowlands.

That part has Darling smiling, not crying.

“I’ve been lucky enough to have some really good horses, but the bottom line is that for every race like this, you get five disappointments so you just really have to appreciate something like this, that’s for sure,” Darling said, the business side of him again turning to mush over Bulldog Hanover.

“I’m just really looking forward to him getting home this afternoon to give him his banana,” Darling said Sunday. “He loves bananas.”

That the two Canadian horses rode back to Ontario together on Sunday after conquering The Meadowlands seemed just right.