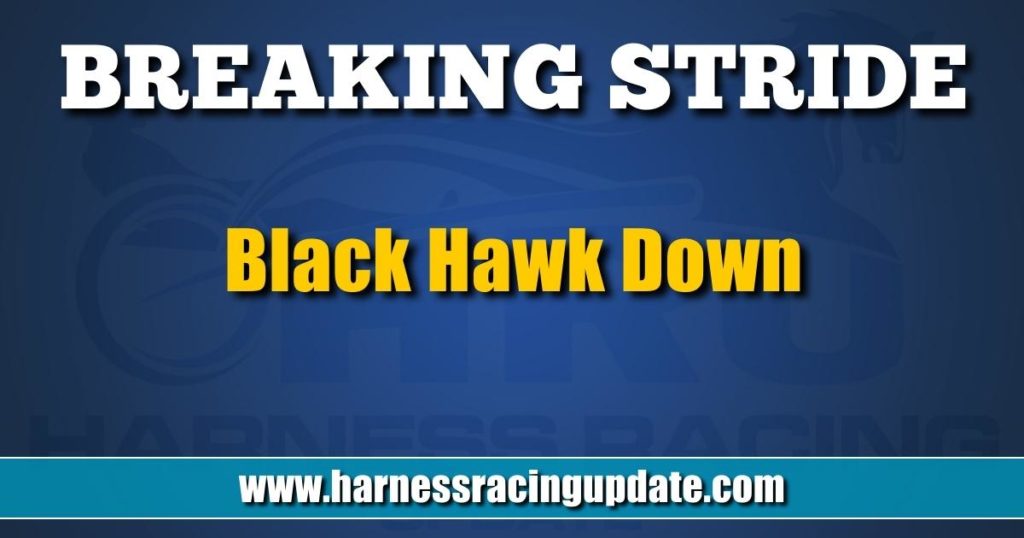 “Life calls the tune, we dance.”

Clearing out some files, I found an unpublished story. The title came easy. Hope and redemption were the themes. I made a few calls, saved the story on a computer file, and slipped it into a desk drawer — waiting for the right time.

The time never came. Death, unexpected death, leaves unfinished business. A racehorse with a phantom in the sulky remained in my mind. Something nudged me to open the drawer and revise the story for telling.

To those of us watching from the racetrack grandstands, he always appeared a touch cocky. He dressed in black, white, and red racing colors; tall, slim, and young. The world was before him as one of the Midwest’s top drivers of harness racehorses. Like many drivers, he was born into the oddly addictive world of trotting and pacing horses. He started young, and the sport defined his life. He was in his prime when his world changed. He lost it all. He fell from favor fast, and he fell hard.

My racing partner and I heard Dave Hawk was at a small farm track and was scuffling for work. He was off the racing radar screen. We had just bought a trotting yearling named Imagine Hanover. We needed to economize, so we gave Dave a call. He was enthusiastic and honest.

“I can’t get on racetracks, even for training, so I can only take your colt so far.”

The road to the little track and the old dark barn where Dave worked was over a hundred miles from me, so I only managed the drive three times. I wish it had been more. Watching a young racehorse learn early lessons is a delightful interlude and good for the soul.

Dave Hawk walked out of the barn on my first trip and introduced himself. He was 48, still whippet-thin, any imagined cockiness not evident. He was humble and grateful, almost shy. His voice was surprisingly high-pitched.

As we chatted, he threw out snippets of his life; divorce, work, a new baby, driving a truck, and past mistakes. His mistake was the elephant in the barn. In the early days of simulcasting, he wagered on horses in races in which he was a driver, which had led to a lifetime banishment from the sport.

“Like everybody, I made some mistakes, but nothing as bad as it seems. Man, I think I served my time a lot of times over. But the people in racing got a job to do. I understand that. I gotta live with it.”

Dave Hawk moved around horses confidently and quickly. He sat in a jog cart like he was born to it. His strong hands kept Imagine Hanover on course. After a few miles of jogging, Dave walked Imagine Hanover back to the barn, slid out of the cart, and said,

“This colt, I call him Big Boy. He’s gonna do good, he wants it, he’s got a bit of attitude, and that’s good.” Hawk shook his head, laughed, and said, “He took me for a sleigh ride the other morning.”

My second visit was one of those mornings that horse racing people find difficult to describe to non-racing people. The only sounds were the clop, clop of hooves in the morning. Hope, history, and the magic of a horse filled the air. A morning where the sky is blue, the horse is magnificent, and everything is possible.

Watching the solitary figure of Dave Hawk as he drove my colt in circles around the oval, both horse and driver looked content, as if there was no place they would rather be. I wondered what the tall man in the sulky was thinking.

After he took the harness off the steaming horse, we sat on bales of straw and chatted. I mentioned I would poke around, talk to a few people, and maybe write an article on his situation.

“Anything man, anything that can help would be appreciated.”

Then he said something odd, “Did you see me drive back in my glory days?”

He smiled sheepishly and said, “And I ain’t kidding, your horse, Imagine Hanover, that Big Boy is gonna make some noise.”

The three influential Ohio harness racing folks I spoke to regarding writing an article on the redemption of Dave Hawk had positive comments about the driver and the person. None set up any roadblocks. They all felt he could move back into the sport he loved, maybe starting with a groom or training permit.

It was a busy and complicated time for Ohio racing. We agreed that the timing for an article on Dave might not be optimal immediately; perhaps it would be best to wait a little longer, maybe six months, until the promising new state program stabilized. So, I slipped my notes and the first draft into the drawer.

Then a trace of backstretch news arrived. David Hawk was in the hospital with an infection. A few days later, the news came that he had a stroke and was gone.

We feel surreal when we learn we will never see someone again. Sad, frighted, and hard to believe. Sometimes, the dead slip back into our world, triggered by a sight, a smell, or a sound. Every time the Big Boy, one of the last horses that Dave Hawk sat behind, stepped onto the racetrack and made some noise, for a moment, I saw a solitary driver dressed in black and swallowed hard.

I remembered his words the last time we spoke. He had a goofy grin and said, “Maybe things will work out. Hey, who knows, man, maybe I’ll race the Big Boy.” He shrugged and smiled. After a moment, he continued, “But for sure, I’ll be watching him.”

“Imagine Hanover continued his march through the Ken Weaver Memorial Trot, rolling to his third straight series win Monday at The Meadows when Brett Miller asked him for trot down the backside. The 4-year-old Broadway Hall—Imposing Hanover gelding gobbled up the leader and cruised home in 1:57.2. Del S. Miller trains Imagine Hanover.”