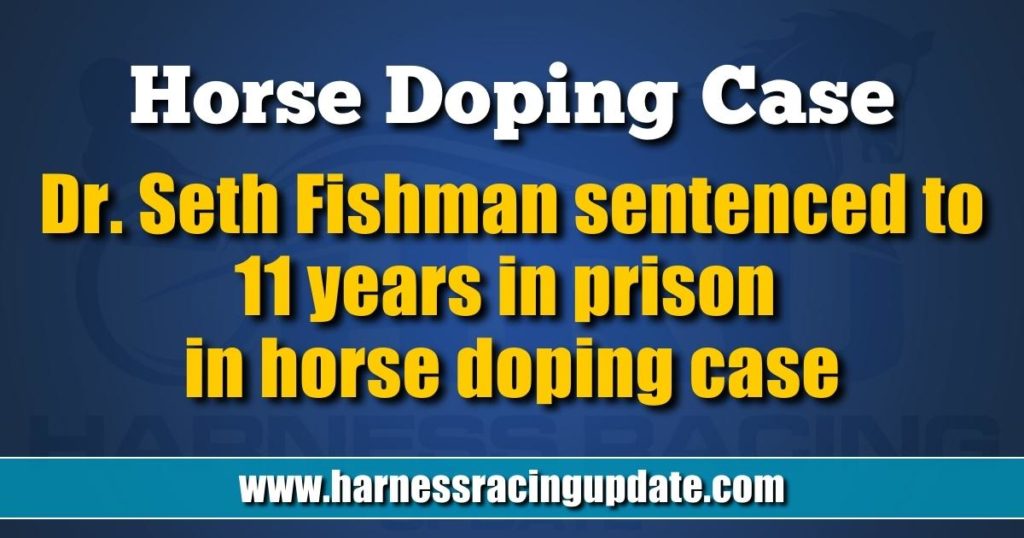 The disgraced veterinarian received the longest sentence, so far, of the
31 individuals involved in the federal government’s case.

Dr. Seth Fishman, the Florida veterinarian snared in the federal government’s sweeping horse doping investigation, was sentenced Monday (July 11) to an 11-year prison sentence in the U.S. District Court for the Southern District of New York.

The sentence is the longest meted out in the case that led to charges against 31 individuals, including prominent trainers Jorge Navarro and Jason Servis. Fishman is the 11th to be sentenced, which includes Navarro. Most of the others have pleaded guilty and await sentencing. Servis faces trial next year.

Fishman, who has been behind bars since his conviction five months ago on two counts of conspiracy to commit drug adulteration and misbranding, appeared in court in prison garb and addressed the court before being sentenced. Prosecutors say that over 20 years Fishman supplied illegal performance drugs to hundreds of trainers, including Navarro, who pleaded guilty last year and was sentenced to five years in prison.

“I really have to apologize for what I did,” the 51-year veterinarian said. “There’s no excuse for my behavior.”

In a rare admission, Fishman conceded violating the law and conspiring with others.

“I should have never pushed the envelope and helped trainers,” he said.

He told Judge Mary Kay Vyskocil he now lacked any desire to “practice medicine” on animals.

“I have no desire to make another substance for a racehorse again,” Fishman said as his family looked on from the gallery.

Fishman concluded his brief remarks by telling the judge that whatever sentence she imposed, “10, 15, or 20 years, I just want to be a better person.”

He showed no emotion as the sentence was handed down.

In addition to his prison time, the veterinarian will be held jointly responsible for $25 million in restitution along with Navarro and other co-conspirators.

The restitution represents Navarro’s total purse winning during from 2016 to 2020.

In addition, Fishman must forfeit $13.5 million, which is what he earned from his business of manufacturing and distributing his performance-enhancing substances which prosecutors say were designed to evade detection in post-race testing.

Vyskocil told Fishman’s by his actions misled racing regulators and drug regulators, as well as others.

“You misled competitors of your clients and the betting public,” she said.

She told him that as a veterinarian, “you enjoyed a special position of trust and you abused that trust.”

The judge said the PEDs Fishman manufactured were harmful to racehorses because they were designed to push them beyond their natural abilities.

She said that in addition to putting at risk horses that were doped with his PEDs, Fishman put at risk the other horses who ran in the race and jockeys who rode those horses and could have been hurt if a horse broke down.

She noted that Navarro paid Fishman credit in a text after winning the 2019 $2 million Dubai Golden Shaheen Sponsored by Gulf News (G1) at Meydan Racecourse with X Y Jet and that the horse died less than a year later.

“To say there was no risk to horses is just not accurate,” she said.

Vyskocil told Fishman that his motive was greed and that up until the sentencing there had been a complete lack of remorse on his part.

Vyskocil said an 11-year sentence was warranted given the sentences of defendants.

She also said she hoped it would act as a general deterrence.

“I know this case has been followed extensively in the racing industry. It is my hope that the sentence acts as a general deterrent to those who might be engaging in the same scourge of criminality.”

Prosecutors had recommended a sentence of 10 to 17.5 years. Fishman faced a maximum of 20 years in prison under federal sentencing guidelines.

Prosecutor Sarah Mortazavi told Vyskocil that a significant sentence was warranted given that Fishman had shipped his illegal PEDs all over the country to hundreds of trainers.

“It was all designed to help a competitor get an illegal edge,” she said.

During her remarks she said Fishman’s claims at trial that as a veterinarian he cared about animals was a “self-serving myth.”

Fishman attorney Maurice Sercarz appealed to the judge for a sentence of less than 10 years.

He said Fishman should be given leniency because of his client’s psychiatric disabilities, which he said were “substantial.”

He said Fishman suffers from acute anxiety, depression and had been diagnosed with a bipolar disorder.

Fishman missed the last two days of his trial after being admitted to a psychiatric hospital.

The proceeding ended with Vyskocil telling Fishman that she heard what he said and that he wanted to be a better person.

“Hopefully you’ll be getting well,” she said. “You do have some demons.”