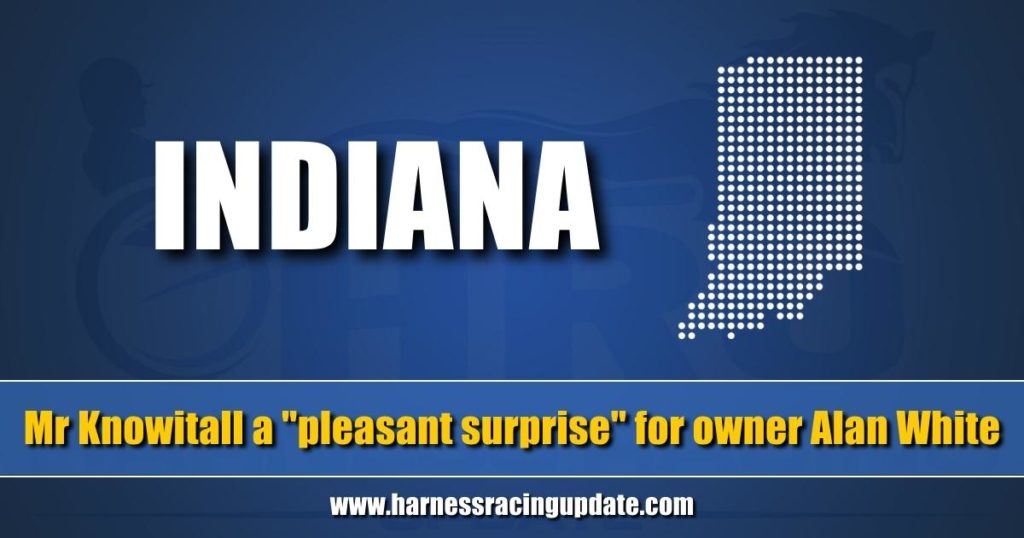 Each fall, Alan White shops for, and purchases, a handful of yearlings to race in Indiana. And while sale price is no indication of ability, the retired dentist identified a higher-priced 2021 acquisition as possessing Indiana Sires Stakes potential. Ironically, it is not the aforementioned colt, but instead the You Know You Do freshman Mr Knowitall, a modest $7,000 purchase, that may provide White his best shot this season in the 2-year-old trotting division.

“You give a lot of money for some and they don’t always turn out. And sometimes you don’t give much and they turn out better than you expect. They don’t know what they cost,” said White.

White and his wife, Carol, attended the inaugural Northern Indiana Yearling Speed Sale in Topeka last September with trainer Doug Rideout and his wife, Julie. A few of the horses they were interested in purchasing brought more than the partners were willing to spend. Buying Mr Knowitall was more luck than strategy.

“I wish I could say it was real scientific. We looked at several of them. With Topeka being a new sale, we didn’t get a chance to look at them at the farms,” White said. “They were having trouble getting bids on him. Doug and Julie were sitting there in the bleachers and I was sitting there with my wife. I said, ‘Doug, what do you think?’ He says, ‘What do you think?’ I said, ‘We’ll bid on him.’ So I bid once and then somebody else bid. Doug said, “Hit him one more time.’ We got him for $7,000. We just got lucky this time I think. But that’s the way it goes sometimes.”

As Rideout began training the babies over the winter at his Winchester, IN farm, White would frequently join in the efforts. He witnessed firsthand how the Joe Hostetler-bred gelding developed over time, becoming one of the top first-year trotters in the barn.

“All winter long we didn’t have high hopes for him, but all of a sudden he just blossomed, he grew, he just started doing everything perfectly. Before you knew it, he was my favorite colt,” said the owner, a long-time resident of Fountain City, IN. “Whenever I go up to train horses, I would take him every time. He would be trouble free, easy to drive. I train the easy ones and Doug will always take the hard ones. I would go up a couple times a week all winter. They give me the easy ones and we would usually try to train three at a time. He kept coming to the top. He always ends up in the best group. He’s just been a real pleasant surprise.”

Like in training, Mr Knowitall has risen to the top on the Indiana fair circuit. Through the first six rounds of competition, the trotter collected five wins in as many attempts. Rideout held him out for a week after his first three wins, bringing the 2-year-old back for consecutive starts at Frankfort, IN. Making his most recent start on July 4, the trainer and driver hoped to turn in a time in the 2:05 range in order to qualify for pari-mutuel racing at Harrah’s Hoosier Park. Mr Knowitall rose to the challenge, romping by 25 lengths. His 2:01.4 clocking fell one-fifth of a second off the track record for freshman trotting colts over Frankfort’s half-mile configuration.

“The fairs are a really good place to start one out, get them used to being away from home, get them used to seeing things. They learn a lot at the fairs. Whether they win or lose is not as important, but sometimes the horses will start telling you things. They’ll tell you how good they are, and sometimes they tell you how bad they are, too. This colt keeps coming to the top,” White said.

Mr Knowitall’s five wins on the circuit put him in the driver’s seat for securing a spot in the $25,000 Governor’s Cup final in August at the Indiana State Fair. He comfortably leads the division in points, and between now and mid-August, the rookie trotter can manage two more fair starts. To be eligible for the Governor’s Cup championship, a horse has to register a minimum seven fair starts and finish in the top eight in points. He is currently more than 60 points ahead of stablemate Help Dust. The connections are seizing on the opportunity afforded Mr Knowitall’s early season success.

“He’s proven himself, so his next start will be in the Indiana Sires Stakes,” said White, who co-owns the horse with Julie Rideout.

The first leg of Indiana Sires Stakes will take place Saturday, July 16 at Hoosier Park. The second leg follows two weeks later. Depending on the outcome, White and Rideout will have to map out a course for the next month and beyond.

“He may very well stay in the sires stakes. If he’s just mediocre and looks like he’s not quite good enough,
we may quickly get him back to the fairs to qualify for the Governor’s Cup. Maybe go back later in the season and try again,” the owner outlined. “You can’t etch these schedules in stone. You have to try to be flexible and take the horses
where they can be the most competitive and make the most money.”

The colt that White had eyed over the winter as displaying the most promise makes his second fair start this weekend. Mr Knowitall, on the other hand, is pointed to the biggest test in his budding career.