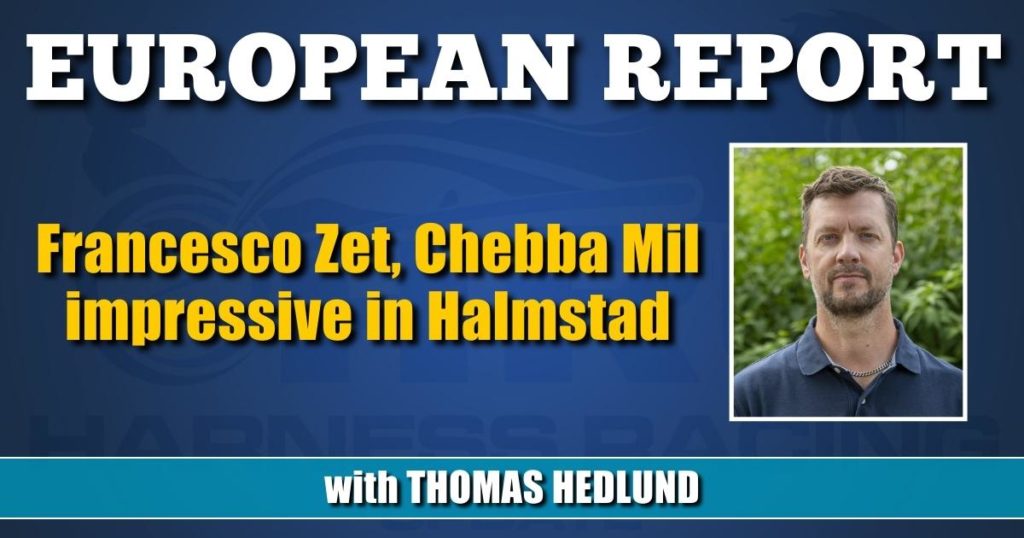 Just like in Åby’s $205,000 Kungapokalen and $205,000 Drottningpokalen in May, Francesco Zet (Father Patrick) and Chebba Mil (Readly Express) were the best horses when Halmstad played host to its popular Sprintermästaren-meeting on Thursday (July 7) night.

The $232,000 Sprintermästaren mile race with three eliminations for the 4-year-olds saw a heavy favorite in Daniel Redén-trained Francesco Zet and the trotter solved his elimination without a problem from the lead. An easy 1:54.1 mile meant that Francesco Zet probably would have saved some power for the final later the same night. And when the other two elimination winners, Sourire Frö (Wishing Stone) and Iznogoud Am (Muscle Hill) both had to do some work in position first over in faster miles, it looked promising for Francesco Zet in the 10-horse final late on Thursday night.

Iznogoud Am, trained by Stefan P Pettersson and driven by Björn Goop drew post 1 in the final and the quick-starting Muscle Hill son kept the lead easily as the car left the field when the sun started to fall asleep in the Swedish summer night.

A :27.1 first quarter with Iznogoud Am in the lead and Francesco Zet connected on the outside raised the race’s excitement a lot and when the field turned into the last turn, the leader looked unbeatable while Francesco Zet started to lose meters to the inside trotter.

But, as we’ve seen before, when Örjan Kihlström pulled the ear plugs from Francesco Zet, the horse exploded. At mid-stretch, the race was in his hands. Francesco Zet flew to a safe 2 1/2-length win in a Swedish record 1:51.3.

This was Francesco Zet’s ninth consecutive win and as for now, he’s the big favorite to win the Derby at Jägersro in September.

Paul Hagoort and Robin Bakker have experienced some great days at the tracks this season and it all started
with Chebba Mil’s triumph in $205,000 Drottningpokalen at Åby in May. Over the distance of 2,140 meters, the
Readly Express mare has proven to be hard to beat and when the final of $155,000 Stosprintern for 4-year-old mares was held in Halmstad on Thursday night, the
shorter distance was a bit of a question mark for her, even if Chebba Mil solved her elimination with no problems on June 27.

But there was an opponent with high class outside of her behind the gate. Stefan Melander-trained Imhatra Am impressed over the mile at Solvalla during the Elitloppet day in May and her ability to leave quickly from the start was a factor in her favor this day.

As the car accelerated, Imhatra Am couldn’t battle for
the lead as inside trotter Global Creation proved to be the quickest and Imhatra Am’s driver Mats E Djuse had to
leave his position in third over after a quarter of a
mile, aiming for the first over position. Because Djuse noted that he had Chebba Mil and Robin Bakker behind, in fourth over, Imhatra Am could control the leader and the pace by herself.

Imhatra Am landed outside the leader halfway
into the race and soon thereafter, Robin Bakker left fourth over with Chebba Mil and the Readly Express daughter had to do the heavy work, three wide at the back stretch and throughout the last turn. Djuse seemed pretty confident as leader Global Creation was beaten at the top of the stretch, but when Chebba Mil attacked on the outside,
Djuse discovered he was disarmed by the strong finisher Chebba Mil.

Chebba Mil, Bakker and trainer Hagoort claimed the trophy in 1:53.4.

The victory furthered the success of the Dutch duo. Chebba Mil has won two big titles in Sweden this year, Mister F.Daag won Copenhagen Cup in May and the same horse won an elimination for Elitloppet. During Elitloppet Day at Solvalla, Hagoort-trained horses claimed the top three spots in Breeders Course final for 3-year-olds, when Hurricane proved to be the best.

Imhatra Am (runner up) and Global Creation (third) finished behind the impressive winner.