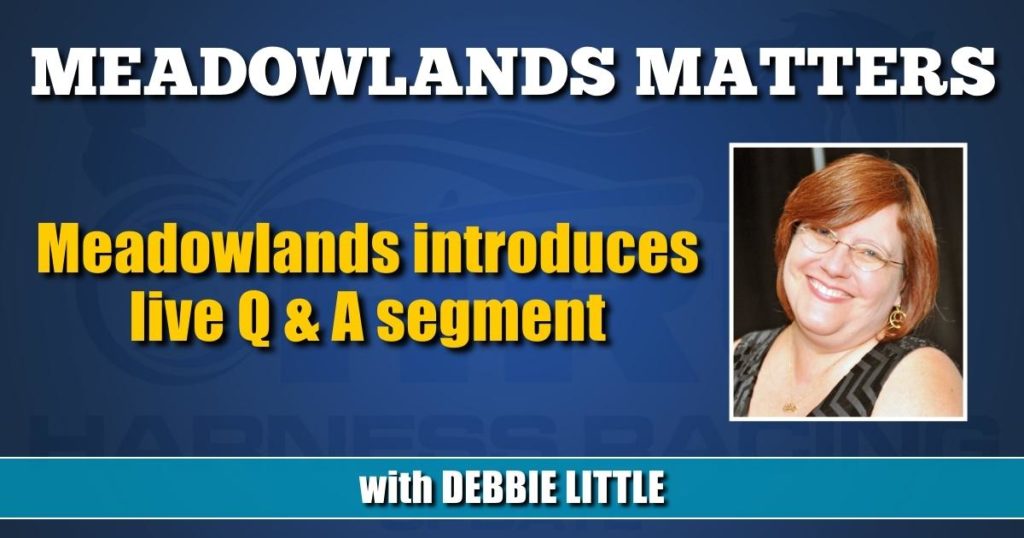 In their newest segment, The Big M added parleys to parlays with some horseman/fan banter prior to the races.

“We appreciate our customers,” said Meadowlands’ chief operating officer/general manager Jason Settlemoir. “They are our foundation, and we are trying to use many different ideas and promotions to open our trainers and drivers up to the public so they have more insight into the races and what is going on. It’s important that all the trainers and drivers realize that we need to be more open with our customers. Many times, it feels like a hidden society that is plagued with bad news. As you know, Mr. Gural and I stand on integrity and principle, so this is just part of that function.”

MacDonald is no stranger to being part of these segments, having recently starred in The Meadowlands’ immensely popular “Mark On Mic” series.

“Any time that you can give a little feedback to people that are watching the races – customers or fans – it’s good,” said MacDonald. “I grew up with five pretty witty brothers, so you’ve got to be on your tippy toes around everybody anyway.”

Although Hatter doesn’t know yet who the next Q&A horseman will be, he feels anyone asked will handle it well and that the segment will continue to gain in popularity.

“I think it was really good, Mark especially,” said Hatter. “But there is not a single driver at The Meadowlands that I can’t just sit down and talk to for five minutes, be it on camera or not. All those guys are such great professionals.

“The online questions are great, of course. There were a lot of great questions asked. But I really think the in-person ones, on camera, where people get a chance to see themselves and watch the video later, I think that’s really cool too to be able to ask questions in person.”

When it comes to interacting with the fans, no one is better at it than DiLeo. From his post in the winner’s circle, he is in constant communication with the fans.

“I’m there for them and I love to talk to people,” said DiLeo. “It’s good to have the fans get questions answered by the drivers. It’s a one-on-one personal thing and it’s a good thing.”

Although many fans would jump at the chance to ask a question to their favorite horseman, others prefer to remain out of the spotlight.

Obviously, The Meadowlands team accounted for that bashful possibility by adding in the online option. Not to mention, it allows followers that logistically can’t get to the track a chance to participate.

“The response was good for the first week,” said Settlemoir. “It will continue to build momentum as more people learn about it. I plan on having these each live race night going forward. If it works and it is beneficial, the segment will be around [after the championship meet].”

As with all live events, there is always the element of unpredictability when you combine a fan with a hot mic.

“It really is a concern with live TV at any time, but most people are respectful and we ask the customer what they are going to ask before going live with the question,” said Settlemoir. “My CCTV team watches and listens closely so they can always close a microphone if they need to or the reporter with the customer can pull the mic away.”

In many ways, that element of not knowing what someone will ask makes the segment fresh and interesting to viewers. Because you don’t know what’s going to come out of people’s mouths, you have to stay tuned.

The Q&A segment is still a work in progress and even though it kicked off the night last week, that doesn’t mean it will on every race card. Depending on what’s happening on a particular night, the spot may take place between the races. Please check Meadowlands’ social media for exactly when it will happen.

If you missed the first edition of Meadowlands’ Q&A, you can watch it on the track’s YouTube channel here.