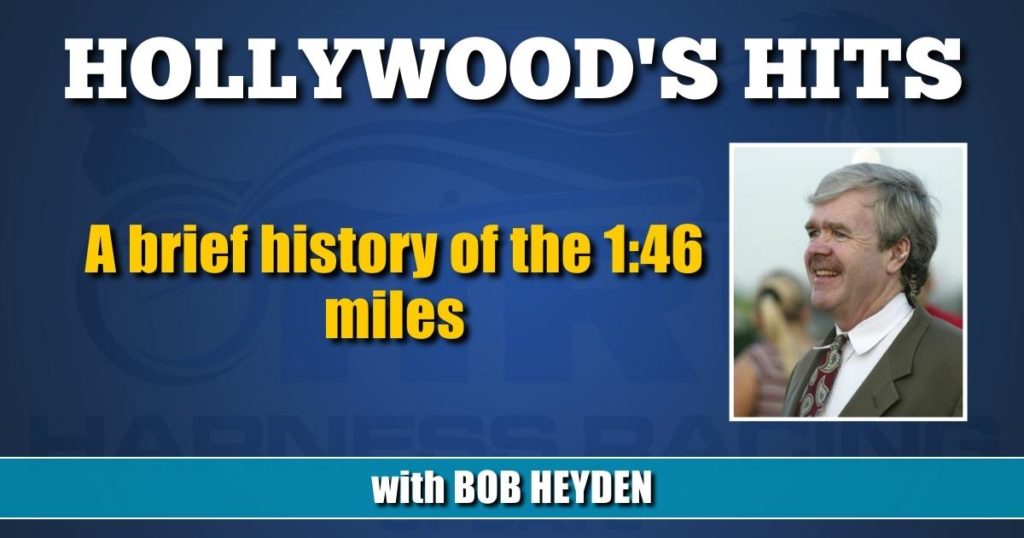 Bulldog Hanover has joined Always B Miki and Lather Up in the exclusive club.

Always B Miki, Lather Up and now Bulldog Hanover are now tied for the 1:46 world record thanks to Bulldog’s huge mile Saturday (July 2) at The Meadowlands.

Also, keep in mind that Bulldog Hanover was breeding earlier this year.

Always B Miki set his mile in Lexington, while the other two did it at the Meadowlands.

This year marks the 25th anniversary of Darling having a pair of standouts in Gothic Dream, the North America Cup winner, and
Northern Luck, the fastest sophomore ever at night with a 1:49.1 mark in 1997. The drivers were David Miller (Miki), Montrell Teague (Lather Up) and Dexter Dunn (Bulldog).

Remember that when ABM posted his incredible mile of 1:46 in 2016 there was a similar logjam at the top with four 1:46.4 efforts starting with Holborn Hanover’s Hambletonian Day spectacular in 2006, Somebeachsomewhere’s Lexington mile of 1:46.4 in 2008 and the same time for Warrawee Needy in 2013 and then He’s Watching in the 2014 Meadowlands Pace. He is still the fastest Pace winner.

Horse produced at Hanover Shoe Farms were 1-2-3 across the wire in Saturday’s second Roll With Joe elimination, headlined by an all-time best equaling 1:46 from Bulldog Hanover. This was after Hanover-bred Rockyroad Hanover scorched the oval in 1:46.2 taking the first division.

It was similar to the 2006 Hambletonian Day when Donato Hanover dominated in $1.5 million main event and sire Andover Hall with his first crop from Hanover, taking down the 1-2 spots in the Hambletonian and won the $750,000 Hambletonian Oaks, too with Danae.

It was the richest single day ever recorded for a sire.

There have been 19 Triple Crown winners in our sport’s history combined. Five of the 19 winners were foaled at Hanover.

The 1968 Yonkers Trot had no betting. Nevele Pride romped — much like Joviality this year. The latter went off at 1-5-after paying the minimum $2.10 in each of her first four tries.

HOW SWEDE IT IS

If Marcus Melander, Lucas Wallin or anyone else from Sweden starts in the 2022 Hambletonian, fans/bettors should take these numbers into consideration:

Four of the last eight Kentucky Futurities have been won by a Swedish trainer.

Eight of the last 13 Yonkers Trots have been won by a Swedish trainer.

Five of the last 12 Hambletonians have been won by a Swedish trainer.

Add in two of the last four Yonkers International Trots and it is 19-for-35 — over 50 per cent.

On the flip side, three American trainers have win the Elitloppet in 71 editions.

Only two pacers have won a million-dollar race and a Triple Crown in the same year — Niatross in 1980 and Ralph Hanover in 1983.

Each set the new single-season earnings record during that magical season.

But you rarely hear Ralph’s name.

True, the 1983 sophomore pacing division were not tough or distinguished. That is not Ralph’s fault.

It is also true that Ralph, a son of Meadow Skipper had high expectations as a stud prospect and only wound up with progeny earnings of $17.4 million. Quite disappointing. But that shouldn’t diminish his on-track accomplishment.

A RARITY THAT COULD HAPPEN IN THE 2022 HAMBLETONIAN

Let’s for a second assume that Andy and Todd McCarthy each will have an assignment in the 2022 Hambletonian final. It did not happen last year. If it happens this year, it will be the first time since the Hambletonian has been contested in New Jersey that brothers will battle in the final.

Brothers Ulf and Jan Nordin competed in 1984 in the elims — each with a Breeders Crown winner no less, Sandy Bowl and Baltic Speed. But, that year there was a race-off won by Historic Freight. So the Nordins did not compete against each other in the final.