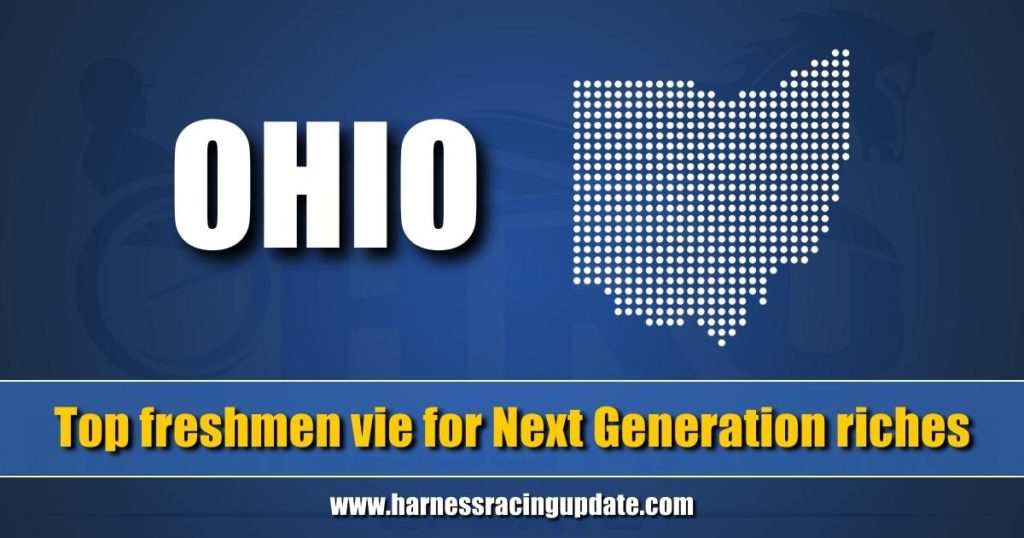 While area pyrotechnic displays are scheduled for Monday night (July 4), the real fireworks may be at Eldorado Scioto Downs during the four $150,000 Next Generation events for 2-year-old Ohio-bred, colt and filly pacers and trotters on Independence Day.

The concept of the Next Generation is similar to the Mohawk Million and requires nominators to pay $10,000 on March 15 to claim a spot in the field for any of the four events.

Eight freshman filly trotters will compete in the first Next Gen event.

Chulada (Brett Miller) drew the rail and will be making her second career start. She was fourth in the $25,000 leg of the Kentucky Sire Stakes (June 26) at Oak Grove Racing – timed in 1:58. Owner Crawford Farms purchased the daughter of What The Hill for $70,000 at the Lexington Select Sale. Chulada is a full sister to Chulo who won last year’s Next Generation filly trot.

The most experienced filly in the field is The Stable.ca and Hutchison Harness’ Swinging Senorita (Anthony MacDonald). The Nex Generation will be the filly’s third purse start – a maiden win at MGM Northfield Park (June 17) and a closing second at The Meadows (June 24).

“We had six fillies training down and a month ago we didn’t know which one was going to make it (to the Next Generation). I left it up to the filly that had the most experience and did her work the best,” said MacDonald. “She’s really strong, quick on her feet… I think we are in a pretty good position.”

The action moves to pace in race #12 and features a quartet of fillies that are a perfect two-for-two in qualifiers — Tk Dragonfly (Ronnie Wrenn, Jr.), Valley Of Fear (Brett Miller), My Red Sea (Kayne Kauffman) and Mcseaside (Chris Page).

Tk Dragonfly is conditioned by Brian Brown for Milton Leeman, Steve Manning, Brent Meizlish and Warren Miller. The daughter of Fear The Dragon won her second qualifying effort at the Delaware County Fairgrounds (June 26) in 1:55.1 (last quarter in :26.3).

Valley Of Fear comes into Ohio with a couple of Woodbine Mohawk Park schooling wins, including her final one in 1:56.1. The $29,000 yearling purchase is co-owned by Hutt Racing Stable, Ozzie Mackay and trainer Blake MacIntosh.

My Red Sea is a daughter of Downbytheseaside, who was picked from the Ohio Select Sale by Kayne Kauffman for the partnership of Redline Racing Stables, Redracer and David Van Dusen. The $75,000 purchase overcame a break in stride at the start of her last qualifying effort at Scioto Downs (June 27) to win in 1:58.3.

Mcseaside is final ‘undefeated’ entry, but most overcome post #8. The daughter of Downbytheseaside is owned by Burke Racing Stable, Beasty, J&T Silva Stables and Knox Services. The driver/trainer combo of Chris Page and Ronnie Burke have captured half of the previous six Next Generation events.

The freshman colt trot will feature the undefeated Black Magic (Chris Lems) and the second The Stable.ca/Hutchison Harness entry, What A Mission (Anthony MacDonald).

Black Magic is the son of Full Count and is perfect in two career starts, including a 1:57.2 mile at The Meadows on June 24th. He is trained by Steve Cross for the partnership of Richard Gutnick, Thomas Pontone and Joseph Lozito, Jr.

What A Mission was a length and a half back in second in his first career effort at The Meadows – individually timed in 1:59.3.

“He was one of our worst colts training down, very immature and made a lot of breaks,” said MacDonald. “He’s really put it together the last month… If we can get him into a good spot and have a little bit of luck, maybe we’ll be in the winner’s circle.”

The colt pacers will close out the Next Generation action.

Twin B Seamonster (Brett Miller) is the group’s fastest performers in the young season thanks to his 1:54.1 gate-to-wire win (June 20) at Woodbine Mohawk Park. David Menary trains and co-owns with Anthony Timmins. The pair purchased this son of Downbytheseaside for $65,000 at last fall’s Harrisburg yearling sale.

Cross Creek (Tyler Smith) has shown some speed thanks to a second-place qualifying effort at the Delaware County Fairgrounds in 1:55.3. Cross Creek is the full brother of Gulf Shores, last year’s Ohio divisional champ and now one of the nation’s top three-year-old pacers. He is co-owned by breeders William Walters and Joe McLead, trainer Ron Steck and Johnny Smith.

The Burke Brigade will send out Act Fast (Chris Page). The Downbytheseaside colt rallied to win his second qualifier (June 21) in 1:54.4 at The Meadows. He is co-owned by Burke Racing Stable, Knox Services, Rich Lombardo and Beasty.

4 What A Mission
(Anthony MacDonald/Jason McGinnis) 5-1