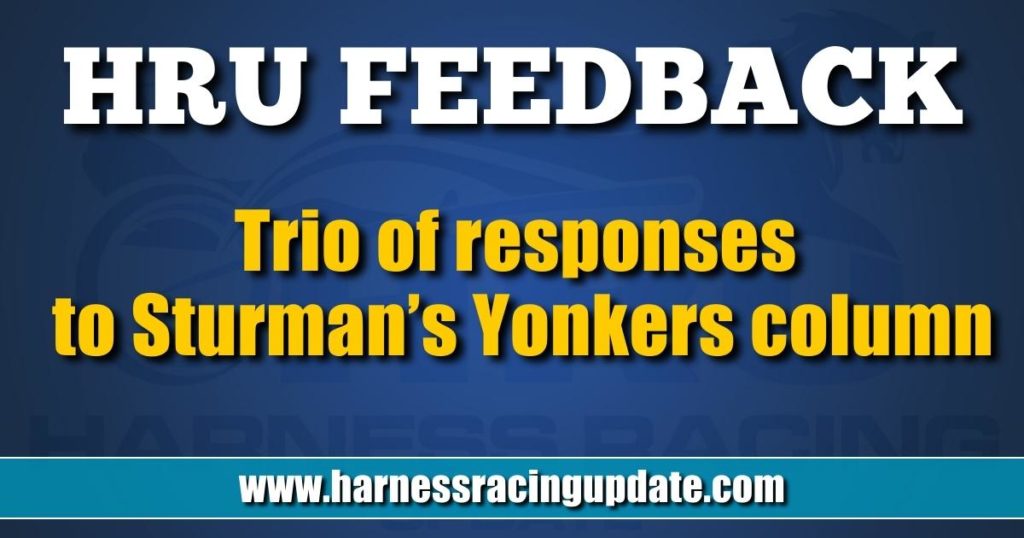 Great column written by Sturman. Well detailed, explained, thought out reporting. Now, to the crux of the problem. Yonkers has been and appears to never want to change, an unbettable harness track. Nonsense like this has a looooong history there. Not that this will ever happen but why doesn’t Mr. Faraldo sink his teeth into this issue and get serious answers instead of lurking in the wings for a chance to take a cheap shot at Jeff Gural? I’ll take this one more step by saying, if an oddity like this would happen at the Meadowlands — and it certainly could — there would be a full blown investigation with detailed answers within 4-5 days max.

That’s the difference between a well run track, Meadowlands, and… well… Yonkers.

Another response to Sturman’s column

This is in response to Mr. Sturman’s article about transparency at Yonkers after a winner paid $161.50 and the exacta paid $93.00.

First, let me say I strongly agree that we need transparency in harness racing and on the surface this looks extremely fishy. But if you dig deeper and peel back the onion, you’ll see it’s not as “out of the ordinary” as it appears.

So what happened after the race started? An increase of $150 on the exacta and almost nothing to win! This is not a race fix.

My definition of a race fix is that multiple people are involved to make sure a number is put across. A $150 is not a multi person bet. Could something illegal have been given to #8? Perhaps. BUT, $150 could be a whim bet. Could be the result of an equipment change. It could have been a mistake! Maybe they meant to bet a $15 Exacta and not $150. And why not bet #8 to win if you’re 100% sure he’s a winner? Especially if you’re betting after they hit the quarter pole as Mr. Sturman suggest it may have been bet past post.

Bottom line a $150 bet can be reasoned away as legitimist actions. Ahh… now if it was a $5,000 bet, that’s something completely different.

So let’s recap… a $150 last second bet was made on the exacta. The win and trifecta pools were pretty normal and they should be transparent about that? There’s no way Yonkers wants to publicize that a $150 bet caused an exacta payoff to go from $493 to $93 because it’s a complete embarrassment.

Brett (Sturman’s) quest for transparency is a winner. With support of the racing commissions, judges training and procedures initiating immediate investigations of the source can at times be determined within hours if not sooner.

In another instance, a questionable bet was traced the same night to a bot wager from a European wagering site.

Another questionable probable payoff noticed after the first two races of a Pick 4 we called the mutual manager and found there was one bet made via a U.S. hub. The hub manger informed us that the wager originated from a wagering site in Australia. I contacted the Australia commission and received a return call the next night. The wager originated at an Eastern Europe site that numbered their accounts. The inquiry ended there as Australia banking confidentiality laws apply to wagering sites.

Educating and motivating presiding judges to implement these investigative procedures is incumbent of the racing commissions. At the very least a policy of informing state investigators to work with the Presiding Judge to ascertain the source.

Bottom Line… there are avenues available to track these wagers. The transparency is warranted albeit how to inform our customers without enhancing their already diminishing perception.