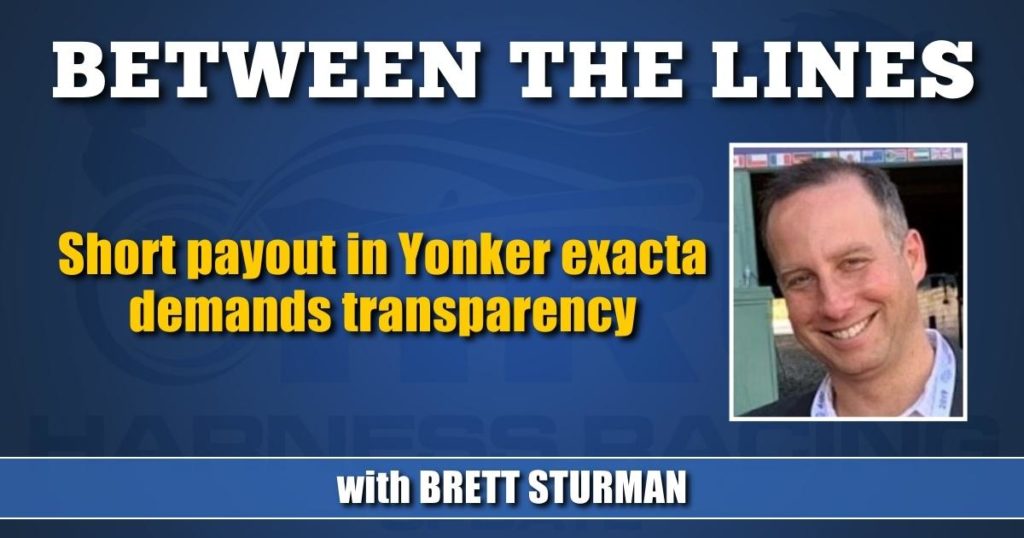 Last month marked the 60th anniversary of the infamous 1962 riot at Yonkers Raceway when fans stormed the track and caused destruction following the sharp late drop in odds of a longshot winner. If not for attendance today being virtual — as well as overall apathy — a similar scene could have taken place at the track last Friday (June 24).

What makes the matter even more interesting is that in the seconds leading up to the starting car letting the horses go, the exacta will-pay graphics on the bottom of the live video feed showed the eventual winning 8-horse and 1-horse combination paying the more realistic amount of $492. Between that time and the final odds, the winning payout was reduced by over 81 per cent.

If it’s to be assumed that nothing out of standard operating procedure occurred, the most assumed reason was the result of “bell bettors.” Meaning, a bettor, or group of bettors, saw that the 8-horse was leaving and hammered the 8-horse in exactas at the last possible second.

That very well could be the case, but I have a hard time blindly accepting that as fact. Here’s some other data to consider:

In the same screengrab seconds before the race that showed the winning exacta combination paying $492, it showed the odds of the 8-horse at 47-1. If there was a sense that the 8-horse was leaving, why wasn’t it reflected in the win pool? Instead, his odds did the opposite as it did in the exacta and drifted up to 75-1 as is typically the case in a post-8 longshot.

Where I think it gets even murkier is when looking at the overall exacta pool picture. At the time the 8-1 combination was paying $492, the combination with 8 and the heavy favorite (3) was paying $171. Following the race, those will-pays were reversed. 8-1 became the shortest payout at $93, while 8-3 would have paid $134. The 3-horse went off at odds of 1-5 and broke, but he didn’t break until after the start of the race, nearing the first turn. In fact, he was very much up on the gate at the start of the race. It’s not like an instance where the heavy favorite breaks miles before the start and then you do see late odds-changes as there is time to react; that wasn’t the case in this race.

So, it seems odd that all that extra attention would have gone to the 1 as opposed to the odds-on 3. And no other horses saw conflicting changes between their final second exacta will-pays and final actual will-pays, so that would rule out a boxing of additional horses included with the 8.

When the 3-horse broke into the first turn, the 8 and 1 then settled 1-2, and that’s the way they went all around.

Could overwhelming mysterious wagers have come in at the last second for any reason on a 75-1 and 6-1 combination? Sure, I suppose. That’s what you’ll be told anyway in nearly any instance of last second odds changes.

I hate to derail this column into a conspiracy theory but let me float this:

As an alternative to explain the 81 per cent drop in odds involving a winning 75-1 longshot, is it possible that wagering was somehow still allowed for a few seconds after the start of the race?

In race 4 of July 6 from last year, Yonkers had to declare a race a no-contest due to a tote malfunction in which wagering did not stop when it was supposed to. In fairness to Yonkers and even more alarming, this has occurred over the past year at other tracks, too. I wrote in a column at that time that every race replay shows the start of the race through the end of the race, but in that instance, the replay only showed the closing stages. Because of that, it was impossible to see the beginning odds, and thus independently determine how odds may have changed during the race as part of the tote malfunction. I just went back to revisit that race and now the replay for that race isn’t available at all.

Of course, the real question is, why is there even a need to speculate at all? The track, the judges, the New York State Gaming Commission, all have access to detailed account wagering history for the race. Provided that unusual – albeit allowed – wagers came in at the last second, why not release the relevant information to the public? What’s the big deal in doing so? I guess if it’s assumed that people will continue to bet no matter what, then what’s the need for transparency.

Not to conflate issues, but the other question is even if all that transpired is within the rules – which I’ll go on record as being dubious of – should “bell betting” even be allowed as a practice? Not all video feeds are up to the second live; most operate on some form of a few-seconds delay which make it impossible for those with a non-live feeds to participate in that “gate-punching” practice if they wanted to.

Bettors accept when they make a wager that it is pari-mutuel after all, and there will be some odds fluctuation between the price made at time of wager and final price. And good bettors have an idea in mind as to what that final price will be. But no one in their right mind would foresee a $93 payout for an 80-1 and 6-1 exacta combination.

This could all be eliminated if wagering was stopped once the starter takes control of the horses. But that likely won’t happen. And unfortunately, it’s not much more likely that we’ll ever know conclusively what happened in last Friday’s first race.