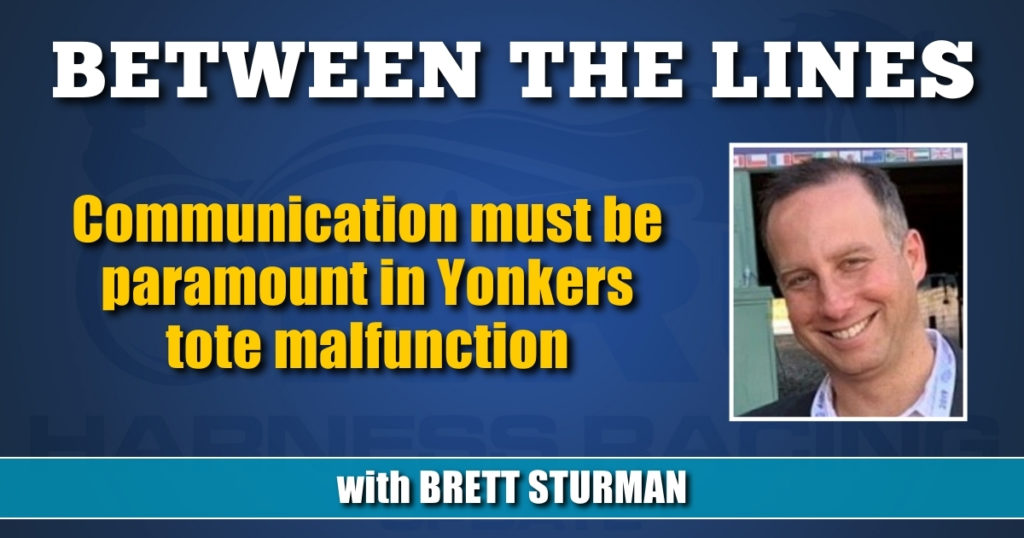 Communication must be paramount in Yonkers tote malfunction

An oddity occurred this past Tuesday (July 6) at Yonkers Raceway where the night’s fourth race resulted in a no contest. Though an out of character event, it’s still one where its
implications must be taken with extreme seriousness.

Having not seen the events live and not having replay availability (more on that below), going solely by the race chart it appears that Hitman Hill left from post 4 and then yielded to an oncoming Branquinho who left from post 7 and cleared past the quarter pole. In a seemingly innocent enough race, Branquinho led the rest of the way easily for the two-length win while Keystone Komodo chased to be second. Hitman Hill backed away from the pocket to finish a well beaten third.

What ensued from there was a series of communication breakdowns.

Following the completion of the race, graphics showed simply the order of finish for the top four horses for at least 10 minutes, but without the hint as to an inquiry or what may have been causing the delay in the race to go official. After that, it was announced that the race was a no contest. Showing a race off-time at 8:24 p.m., the track issued a tweet over an hour later at 9:43 p.m. stating “Tonight’s fourth race was declared a no contest due to a tote malfunction in the stop betting that caused wagering to be open during the race.”

There’s a lot to unpack in that statement. For starters, it shows irrefutably the potential for wagering to continue even as a live race has begun. Though it seems that there’s been ample anecdotal evidence through the years to support it, any suggestions of “open windows” (continuing to be able to bet after a race has started) have been typically treated as conspiracy theories.

So, what actually happened in the case of Yonkers tote malfunction? No one knows. Was it simply a matter of human error? Was it some form of a technical malfunction? Was it something more nefarious? The public, and particularly those who had wagered on the race and even more-so those who would have cashed otherwise, deserve a more detailed explanation than the tweet.

It’s critical in being able to know with certainty what happened at Yonkers because surely this is not the first time in the history of racing that such an event has occurred. And the track owes it to the public and to their customers to let them know not only what happened but how that is going to be prevented again in the future.

Adding to the confusion is not being able to piece together the scope of impact by the tote malfunction. Almost every race replay begins from a few seconds before the start of the race through the end of it. For this race, the replay made available only shows the closing stages of the race. Because of this, you can see the “final” closing odds, but you can’t see the odds of what the horses were at the start of the race, presumably before any in-race changes occurred.

I was able to take screenshots that night of the Pick-3 and Pick-4 will-pays leading up to that race and based on those, the #4 Hitman Hill was slightly favored in both pools over #7 Branquinho. But who knows unless you saw it live and remembered it if Hitman Hill was still favored as the race started. All we know is that according to the graphics in the homestretch Branquinho was 3-5 and Hitman Hill was 3-2. In the post-race graphics, the winner Branquinho was priced even shorter at 1-2 while third-place finisher Hitman Hill drifted slightly to 8-5.

When trying to obtain additional information for this column, the track was not able to comment on the matter at this time and the judges forwarded me to the New York State Gaming Commission.

Whatever the explanation is, and perhaps it’s a very simple one, communication of it is owed to the public.

This weekend is highlighted on the racing front with two eliminations for the Meadowlands Pace. With 14 entrants, there are two eliminations Saturday (July 10) where the top five of seven horses in each $50,000 elimination will come back for next weekend’s final.

ONE EIGHT HUNDRED has proven himself to be the real deal and credit to Takter for managing the maturation of this one since last year. After impressively sprinting up the inside two back to beat South Beach Star, his race last week against older conditioned foes was even faster when he established a new life mark of 1:48 flat including a :25.3 kicker at the end. He’s not unbeatable by any means, but he is a deserving elimination favorite. ROCKYROAD HANOVER hasn’t been able to get the best of One Eight Hundred yet this year, but he does come off a race where if not for a ticky-tack disqualification he would have been given due credit for beating Perfect Sting. HEART OF CHEWBACCA gets a big-time driver change to Brennan. Noble was first listed down to drive when entries were first taken and I’m not sure if Brennan replaces him due to that drive in the Messenger elimination, but at any rate a return to early speed may be coming. CHARLIE MAY gave an excellent account of himself when running second to American Courage in his Messenger elimination and final. CHASE H HANOVER loomed for a moment first-over into American Courage; playable longshot. EXPLOIT posted a 1:48.1 mile four back.

AMERICAN COURAGE passed his Messenger test with flying colors and now gets a shot on the big track. When I spoke to trainer Alexander a couple weeks ago in advance of the Messenger eliminations, not only was he adamant about how good his colt was, but that he was going to open even more eyes once on the mile track. This is his shot! Two-year-old champion PERFECT STING went a 1:48.1 mile two back but then for all intents and purposes was defeated last out at The Meadows off a :55.1 half mile. He’ll be tested here for sure. SOUTHWIND GENRY was charted with interference last out attributed to Rockyroad Hanover, though it’s tough to say if it materially impacted him. He was a dominant winner three back at Philly in a race that included One Eight Hundred; would have to think Yannick will be pushing forward early. ABUCKABETT HANOVER was beaten last out at Yonkers before the break but that was a nightmare trip from post 8 anyway; gets a rematch with #1 on more level footing.