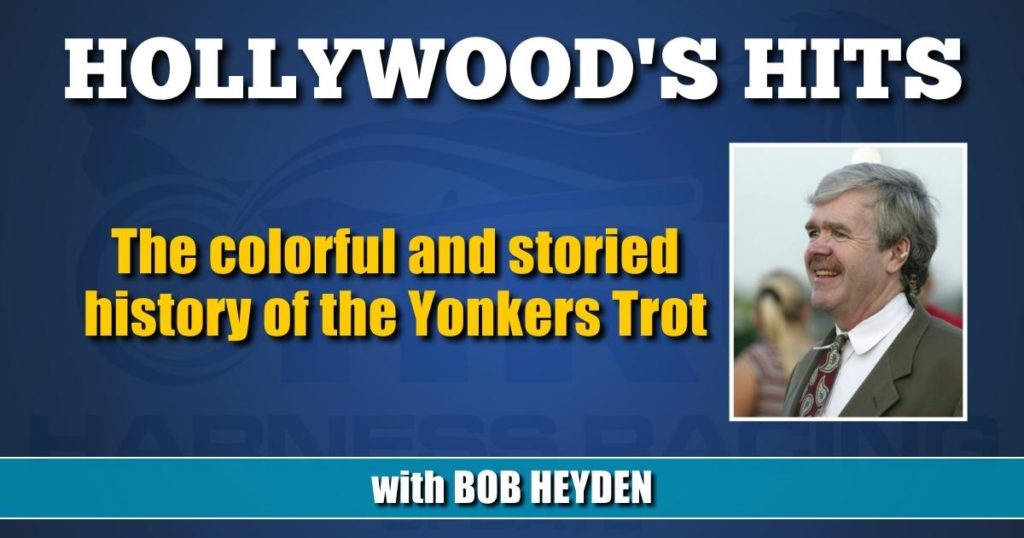 The colorful and storied history of the Yonkers Trot

Jimmy Takter is the only trainer to win the Yonkers Trot 3 straight years (2009-2011). Judge Joe got it going in 2009 in the $670,779 edition, which was Takter’s debut in the race. The trainer won it in 2010 with On The Tab and in 2011 with Leader Of The Gang. Takter then won it again in 2014 with Nuncio and (sort of) took down the Trotting Triple Crown of Trotting that year with two different colts. Nuncio also won the Kentucky Futurity and Trixton won the Hambletonian.

The first eight Yonkers Trots were at a 1 and one 1/16 miles. The 2004 edition was held at Hawthorne and the 2005 at Freehold while the Yonkers slots renovation was still ongoing. Oddly, the two times Trond Smedshammer won it were away from Yonkers Raceway — in 2004 with Windsongs Legacy and in 2005 with Strong Yankee.

DOUBLING UP (OR EVEN MORE)

Four times a trainer has won the Yonkers Trot back to back. Ake Svanstedt (Johan De Palema in 2021) looks to be #5 in 2022 with Justice. Jan Nordin did it in 1984-1985 for his father Soren (we counted this as a Nordin double), Jimmy Takter won three straight in 2009-2011, the Dancers did it three straight with Vernon going first in 1970 then Stanley back to back. Billy Haughton also did so in 1976-1977 when his Steve Lobell and Green Speed turned the trick.

Rod also drove C R Kay Suzie in 1995. She was the first female to win the Yonkers Trot.

After a brilliant 2-year-old season, where he raced 20 times, Mack Lobell got a long rest and came back in mid-season form debuting as a sophomore in 1987 and winning the Yonkers Trot by 3 3/4 lengths over a colt named Sir Taurus that Bill O’Donnell drove for Jimmy Takter.

The time of 1:57.4 was a track record. It also equaled the world mark, but was a little shy of the sophomore half-mile record of 1:57 flat from Armbro Devona, who, like Mack Lobell, was also a Chuck Sylvester trainee.

WHAT WERE YOU DOING THE DAY YOU TURNED 30?

Melander is looking for a double in the Yonkers Trot. He won it in 2019 with Gimpanzee.

This year, he hopes to be the third trainer to capture the Yonkers Trot with a filly: Joviality S.

Melander was only 27 when he did something that might not be repeated in the next century. He got three checks in a single Hambletonian without winning it. That came in 2019 when Greenshoe was second, Gimpanzee was third and Green Manalishi was fifth. Melander is also the only trainer under 30 to ever get money in four consecutive Hambletonians (2017-2020).

Cat Manzi turned 72 on June 27. He will likely be watching the Yonkers Trot with fondness, maybe with a sprinkle of reminiscing thrown in. He won the Yonkers Trot three times — 1994 Bullville Victory; 2004 Sugar Trader for John Brennan (who was born one day before from Manzi in 1950) and then Green Day in 2007. With over 95,000 career drives (the most ever), it is almost a certainty that The Catman would include these moments at or near the very top.

On July 11, 1992, McCluckey and Magic Lobell dead-heated in the Yonkers Trot.

Over 20 minutes, five prints were needed to determine it was a dead heat.

This came three years after the 1989 Hambletonian dead heat when Probe and Park Avenue Joe tied on the wire.

Lachance is the only driver to have driven in both races. He drove Bon Vivant, who was fourth in the 1989 Hambletonian.

Neither the Yonkers Trot nor the Messenger Stakes were held in 2020 due to COVID-19.

The Messenger Stakes is the most nomadic of any Triple Crown race. From 1987 to 2004 it was held at six different tracks: