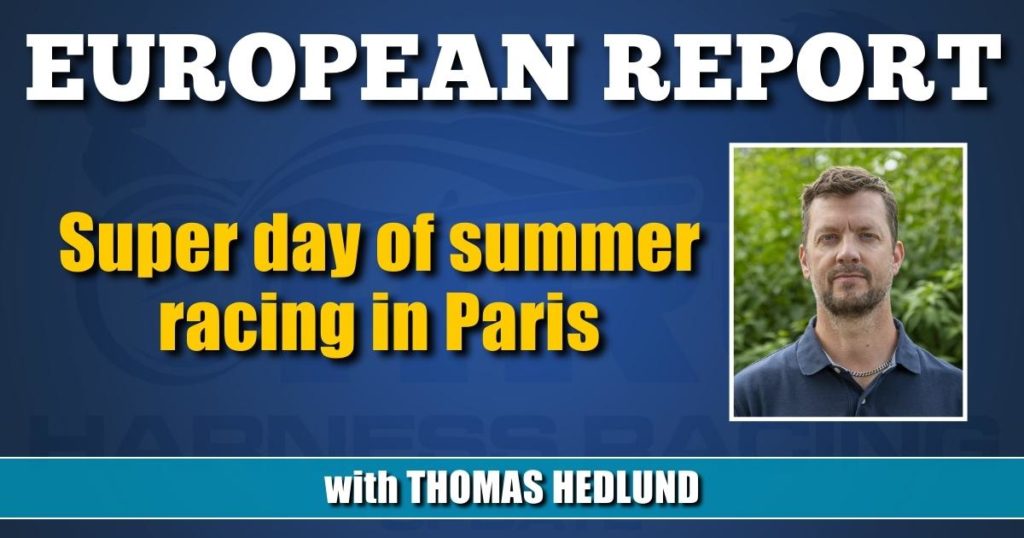 Hot summer weather has washed over big parts of Europe this summer and the heat has been a problem in the central parts of the continent.

Vincennes in Paris played host to a strong race card on Sunday (June 26) afternoon, and luckily, the sun shone, but not with the same intensity and heat as earlier in June, so the conditions were as close to perfect as one can get.

Christian Bigeon’s 5-year-old Hip Hop Haufor (Up And Quick) started the day when the $95,000 Prix de Grasse, contested over 1.7 miles, was on the menu. After second over trip, Hip Hop Haufor secured the safe win in the last turn and won in a mile rate of 1:57.1.

Thierry Duvaldestin-trained Idao de Tillard (Severino), together with Philippe Allaire’s Izoard Vedaquais, are the dominant horses in the French ”I-crop” and when the latter trotter was missing in the $85,000 Prix Raymond Fouard, the road to victory was easy, without big obstacles. Driver Cleo Duvaldestin placed Idao de Tillard on the leader’s outside and controlled the field all the way. At the top of the stretch, Idao de Tillard got a short reminder that he had to do his job seriously and he flew to outstanding win in mile rate 1:54.4 over 1.3 miles.

Junior Guelpa served his 10-yer-old gelding Charly de l’Aunay a perfect trip where Guelpa could wait with the final attack until the top of the stretch in the $95,000 Prix le Parisien. Charly de l’Aunay got a length’s advantage with 150 meters to go and held strong finisher Belker behind by a head as the wire was crossed. Mile rate over 1.7 miles was 1:57.4.

French bred 3-year-olds battled in the $211,000 Prix Albert Viel and two horses who have dominated the crop were in favorite positions. Philippe Allaire-trained Just A Gigolo (Boccador de Simm) is a charismatic trotter and driver David Thomain aimed for the lead a kilometer into the race, a move that resulted in a first over trip for second choice Jazzy Perrine.

Just A Gigolo controlled his opponents all the way and hit the wire as a winner in a mile rate of 1:57.4 over 1.6 miles.

The $211,000 Prix Rene Balliere for the older elite trotters was the card’s last big race and the field was one of the best ever seen on European soil this season. Several top trotters, such as Elitloppet winner Etonnant (first choice), Vivid Wise As, Ampia Mede Sm, Diable de Vauvert and Galius went behind the gate for the 2,100-metre race. The race became a show from several points of view.

Etonnant was pushed to the lead after a quarter of a mile in a quick opening since early leader Hohneck and driver Francois Lagadeuc rather opted a pocket trip behind the race’s favorite. Alessandro Gocciadoro trained Vivid Wise As (Yankee Glide) was served a cover outside trip by Matthieu Abrivard and when the field turned for home, two horses had some advantage ahead of the followers and both Etonnant and Vivid Wise As fought bravely, aiming for the win. Outside horse Vivid Wise As proved best this day and the Alessandro Gocciadoro trained top trotter hit the wire in an incredible mile rate: 1:51.1 over 1.3 miles, same as Face Time Bourbon noted last year.

The $211,000 Prix d’Essai monté race (racing under saddle) for 3-year-olds became a spectacular show where three or four horses had a serious shot for the win as the field turned for home in the 2,700-metre race.

Leader Jelyson (Timoko), with Yoann Lebourgeois in the saddle, was under hard challenge from outside, and inside horses during the race’s last 200 meters and for a while Jelyson was clearly beaten, somehow the horse found more power and gave new leader Joyner Sport a real battle towards the wire. The two horses hit the wire in a close call, where it turned out that leader Jelyson held his nose first in mile rate 2:00.1 over 1.6 miles.

The 4-year-olds made up the $255,000 Prix President Republique-Etrier 4 ans, finale and Swedish trainer Tomas Malmqvist had prepared his Intuition (Brillantissime) in the best possible way. A first over trip during the race’s last half didn’t stop jockey Adrien Lamy from stepping on the gas pedal in the end of the last turn and Intuition left her opponents by several lengths over the stretch. 23-1 winner Intuition scored her fourth victory when it was serious business going on. And there was no doubt about who was the best horse in the race. Intuition won in mile rate 1:57.1 over 1.7 miles.

Jelyson was an upset winner (27-1) and the third upset in the monté races came in the $255,000 Prix de Normandie for 5-year-olds. First choice Hirondelle du Rib attacked towards the lead in the last turn and jockey Jean Loic Claude Dersoir seemed to have everything under control as the field turned for home stretch. But Franck Leblanc trained Happy And Lucky (Ready Cash) with Adrien Lamy in the saddle gained some speed during the race’s last 100 meters and shortly ahead of the wire, Happy And Lucky disarmed the favorite. The mile rate was strong — 1:56.2 over 1.9 miles.

Norwegian racetrack Leangen in Trondheim closed its gates in February this year and the region in northern Norway quickly opened a new track, south of Trondheim, named Orkla Arena. On June 25, the track played host to the newly established $50,000 Nils Arne Eggens Minneslopp for older trotters over 3,400 meters (2.1 miles).

Kristian Malmin drove his Oracle Tile over the 3,440-metre distance and hit the lead after a mile. Top trotters such as Moni Viking and Best Ofdream Trio followed behind the leading Oracle Tile (Ready Cash) and the leader was too good this day. Oracle Tile sprinted to safe win in a mile rate of 1:59.2 while Best Ofdream Trio was second, ahead of strong finisher Ble du Gers.

Four-year-old Ens Snapshot son Gasolin proved to be the best when the $87,500 Jydsk 4-years-old Grand Prix was held in Århus, Denmark on Sunday (June 26) afternoon.

Jörgen Sjunnesson drove Steen Juul’s trotter and in a race where several horses went out of the game due to breaks, Gasolin kept his gait and could sprint to safe win in mile rate 2:02.2 over 1.4 miles.

SET FOR FIRST E3 FINALS OF THE YEAR

The E3-series for 3-year-old European-bred trotters has its first finals this Saturday (July 2). The distance in the race is 2,140 metres and the eliminations were held at Bergsåker racetrack on June 16.

Finnish trainer Pekka Korpi is well known for his ability to have well prepared horses in these kind of races and E3 has been a successful story for him throughout the years. This time, Korpi qualified two horses (both of them won their elimination, respectively) and the most interesting trotter from his stable is probably Express Duo son Corazon Combo, who is undefeated after 12 races so far. Corazon Combo is the horse to beat in Saturday’s final for colts and geldings.