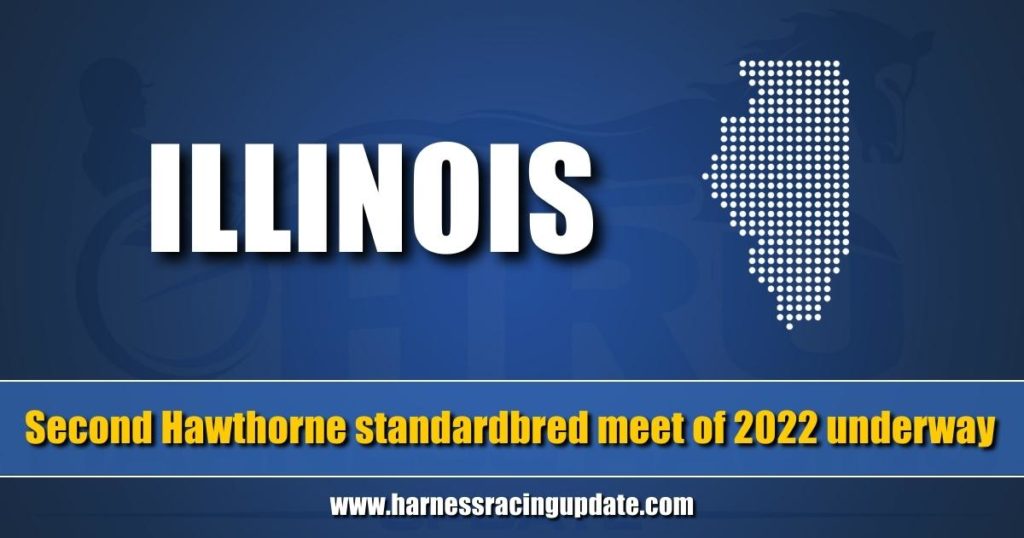 With two very successful weekends of non-betting racing at the State Fairgrounds in Springfield serving as a springboard, the Illinois standardbred community had high hopes going into Thursday’s start of the last of two 2022 meetings at Hawthorne Race Course.

As a consequence of the decision by corporate owner Churchill Downs, Inc. to reject casino gambling and terminate racing at one of North America’s premier thoroughbred tracks, Arlington International Racecourse, to eliminate competition for a nearby casino it co-owns, Hawthorne is the only racetrack in the Chicago metropolitan area.

The harness horses began the unprecedented year by racing from Jan. 7-March 20 after which the thoroughbreds took the reins for a meeting that began April 2 and ended last Saturday.

Now, it’s the standardbred’s turn and the meeting that began on Thursday will continue through Sept. 11. Thoroughbred racing will resume on Sept. 22 and run through Dec. 31.

Following the cessation of racing at Balmoral Park and Maywood Park in 2015, from 2016 through 2021 Hawthorne held a harness meeting that extended from May into early September, dates that coincided with those of the thoroughbreds at Arlington.

“It’s so much different than anything we’ve ever had to deal with in Illinois,” said driver Casey Leonard, whose string of six consecutive Hawthorne titles ended when he finished second to Kyle Wilfong at the year’s first meeting.

To compensate for the lost harness racing opportunities, the IHHA, Hawthorne and the Illinois Department of Agriculture reached an agreement to bookend the second standardbred meeting with non-betting racing 175 miles to the south at the Springfield State Fairgrounds on June 17, 18, 24 and 25, Sept. 16, 17, 23, 24 and 30 and Oct. 1.

A total of 285 horses raced during the four days and 29 trainers were represented.

“It was very encouraging,” IHHA executive director Tony Somone said. “It looks like there are plenty of horses. Hawthorne understood it was important to get these races in and we were going for decent purses.

“Maybe we’ll have full fields throughout the meeting.”

This would be a contrast to the just-completed thoroughbred increment during which in mid-May the number of scheduled weekly programs was reduced from three to two while the number of races per program was increased from eight to 10.

“There was sort of a compromise with Hawthorne and going from 24 races a week to 20 helped to increase the size of the fields significantly,” according to ITHA executive director Dave McCaffrey.

The harness schedule calls for cards Thursday, Friday and Saturday of this week followed by Friday, Saturday and Sunday racing through August and then Thursday through Sunday racing during the final two weeks of the meeting.

Race secretary Robin Schadt carded nine races for Thursday, 11 for tonight (July 1) 12 for Saturday, and full fields were the norm.

The main event on the state’s harness racing calendar — the Night of Champions, which consists of 11 championship races for Illinois-bred pacers and trotters with a total pot in excess of $1 million — will be held on Saturday, Sept. 10.

Last fall Lousdobb won the $114,000 Kadabra for trainer Steve Searle and Fox Valley Ozzy was victorious in the $138,000 Incredible Finale for trainer Gary Rath. Leonard drove both horses and he was back in the sulky on Thursday.

Funky Wiggle’s collaborators in $120,500 Robert S. Molaro Memorial on the Night of Champions, trainer Curt Grummel and driver Wilfong, teamed up again on Thursday as she set out in quest of her seventh victory in her last eight starts dating back to last August at Hawthorne, Du Quoin and Springfield. In her lone loss she was second.

During the two past two weekends, the 7-year-old gelding Fox Valley Gemini flashed the form that enabled him to win his Night of Champions races for five straight years. He won his Springfield races for driver Casey Leonard and his trainer father Terry Leonard by landslide margins of 10 ¼ and 7 ¾-lengths.

The Leonards and Wilfong all made strong showings during the two weekends at Springfield but they had to yield the spotlight to trainer Erv Miller and his driver son-in-law Atlee Bender. Bender’s 14 winners made him the leading driver and Miller’s seven were the best showing by a trainer.

Casey Leonard’s 13 winners were the second most for a driver and Terry, who took his fourth trainer title in five years at the earlier Hawthorne meeting, was the second most successful trainer with five winners.

One of the highlights of the Springfield mini-meeting was the renewal of the Juneteenth Celebration race inaugurated last year at Hawthorne to pay tribute to the contributions made by black drivers. This year’s invitational was won by Rock Steady Ron, a 7-year-old gelding driven by his trainer and co-owner Jamaica Patton.

Heavy Pressure, who had Archie Bufford at the reins for trainer Roshun Trigg and owner Latoya Hulitt, came in second and Rollin Coal, a mare driven by owner-trainer Hosea Williams, was third.

At the beginning of the second paragraph of my June 17 story on the races in Springfield, I inadvertently wrote “Trying to make the worst of a bad situation…” in describing the circumstances surrounding the mini-meeting.