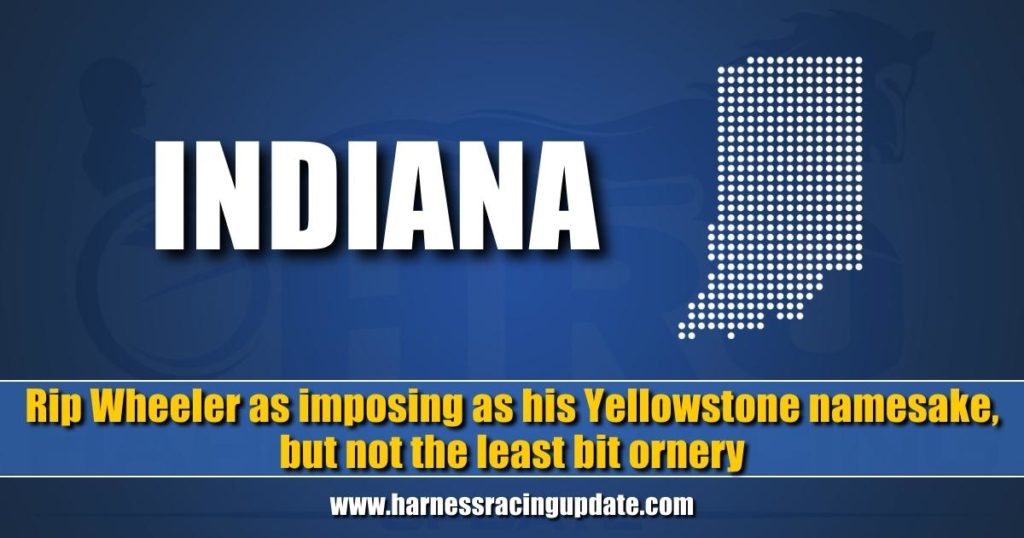 Rip Wheeler as imposing as his Yellowstone namesake, but not the least bit ornery

There are certain expectations that come with naming a horse after a famous personality or character. One might think that the Indiana-sired sophomore Rip Wheeler is as tough and ornery as his namesake, the farmhand played by Cole Hauser in Paramount’s hit series Yellowstone. At 16.2 hands in height, the gelding has the size to be physically imposing, but breeder and co-owner Jeff Fought admits his personality departs from the well-known character.

“I’ll say he fits that part because he’s large. Physically, he’s got the Rip Wheeler look,” Fought said. “Other than that, he’s nothing like Rip. This might be the sweetest colt I’ve ever owned. He’s just like a big, gentle giant. He’s a pet.”

“I think that group is ultra-competitive. These colts that are in the sires stakes and this Hoosier Cup race, there are easily five of them that can step up and win at any time. So far, it seems like an evenly matched group,” said Fought.

Out of Somebeachsomewhere mare Novascotia Hanover, the young pacer foaled in April 2019 at Fought’s Cornerstone Stock Farm in Shipshewana, IN. His half-brother, a Pet Rock colt, possessed a smaller stature. Rip, by comparison, was much larger.

“I purchased her from Joe Bellino when he dispersed all of his mares. That was probably one of the very best mares that I owned. She was in foal to Pet Rock, and that resulting foal was what I would call a peanut. He was just a little guy,” Fought said. “Rip is the only foal that I had out of that mare that I raised. They couldn’t be two different individuals. The cross just worked its magic on this one. He was a big boy from the time he was born.”

Shortly after the colt’s foaling, Fought settled on a name.

“I just love the Yellowstone show. Obviously, Rip’s a great character in there. This is just a big bruiser of a colt,” he said. “When he was born I put the name choice in as soon as I could because that show was really getting popular at that time. I was a little surprised I was able to get it.”

By November, Fought dissolved Cornerstone Stock Farm via dispersal at the Midwest Mixed Sale. He kept four Indiana-sired weanlings, however, Rip Wheeler being one of them. Shane Bowermaster broke and trained the baby in Florida before shipping him back to race last summer. Missy Essig conditioned the gelding in Indiana that first season, and Rip Wheeler managed two starts. In his debut he kicked home in :26.2 to finish fourth. The next time out he raced third, registering a 1:54 mile for driver Matt Krueger.

“He did everything right and we loved him. He started to get a little bit sore, and I would say probably just colt soreness,” Fought said. “I had no aspirations on trying to push that colt. I thought he would be a better three year old anyway. We made the decision to quit with him. We just got him a little bit of experience and he showed the ability we thought he had, so we decided to hang it up for the year.”

Owned in partnership with Fought and his father, Dave, Rip Wheeler has made a strong showing in 2022 as part of the Haynes Stable. In nine seasonal starts, the sophomore has yet to finish off the board, picking up four wins and banking $51,880. After winning the $22,000 Hal Dale final in May, the pacer got his first taste of Indiana Sires Stakes action on Memorial Day. Steered by Brandon Bates, Rip finished four lengths behind JK Victory in a leg one division, pacing the mile in 1:50. In the second leg he was third behind JK Victory and Ponda Warrior.

“Indiana Sires Stakes are about as tough as it gets,” the owner said. “There are four or five, depending on the trip, that can win any sires stakes race we’re in. A lot of it just comes down to the draw and the trip.”

In the second of two Hoosier Cup eliminations held Friday, June 24, Rip Wheeler and Bates raced fourth through a :55.2 opening half. Tipping first up on the backside, the gelding advanced on leader Big Law and grabbed the lead near the top of the stretch. The second choice was able to outlast the Erv Miller-trained The Longest Yard by a head at the wire in 1:50.1. Rip has drawn post two in Friday’s final and is the 5-1 fourth choice on the morning line behind favorite and elimination winner Ponda Warrior (Post 1, 3-1), elim runner-up JK Victory (Post 5, 7-2) and Sure Thing Herman (Post 3, 9-2).

The Hoosier Cup was not originally part of Rip Wheeler’s schedule. The event, for Indiana-sired 3-year-olds, does not require nominations, but instead a $750 entrance fee. Instead of staking in the winter and hoping a horse is ready in time, connections can make a quick decision and pay the fee. Haynes and the Foughts stand to capitalize on their entry being sharp at the right time if everything falls into place.

“We weren’t planning on racing him many back-to-back starts because he’s still a green colt. But the Hoosier Cup came along. It popped up and he’s pretty sharp right now. Walter and I talked and we decided to race him,” Fought said. “It’s nice because in this situation, you have a lot more time to gauge how a horse is in the moment. With sires stakes legs, obviously you know exactly when they are and it’s all planned out. The colt hasn’t raced that hard and he really seems to be sharp right now. The situation really suits a colt like we have.”

Fought did not stake Rip Wheeler outside the state. He did make the gelding eligible to the open stakes at Harrah’s Hoosier Park in the fall, giving his homebred a chance at several big opportunities before season’s end.

“He’s green and it’s a situation where there is so much money to make late in the year. You just see some of these that were managed carefully step up late in the year. I’ve always liked that philosophy,” he said.

Fought offered that Rip Wheeler “gets a lot of people talking about him strictly because of the name.” If the sophomore continues to hold his own in this deep group of Indiana-sired pacing colts, he’ll give racing fans more to talk about than just his name. Nothing would make his breeder happier.

“It’s rewarding. Even though I don’t miss the stress of having mares and babies, there, for me, is no replacement for having one that you bred and raised win,” he said. “They have more meaning. There’s just no way around it.”