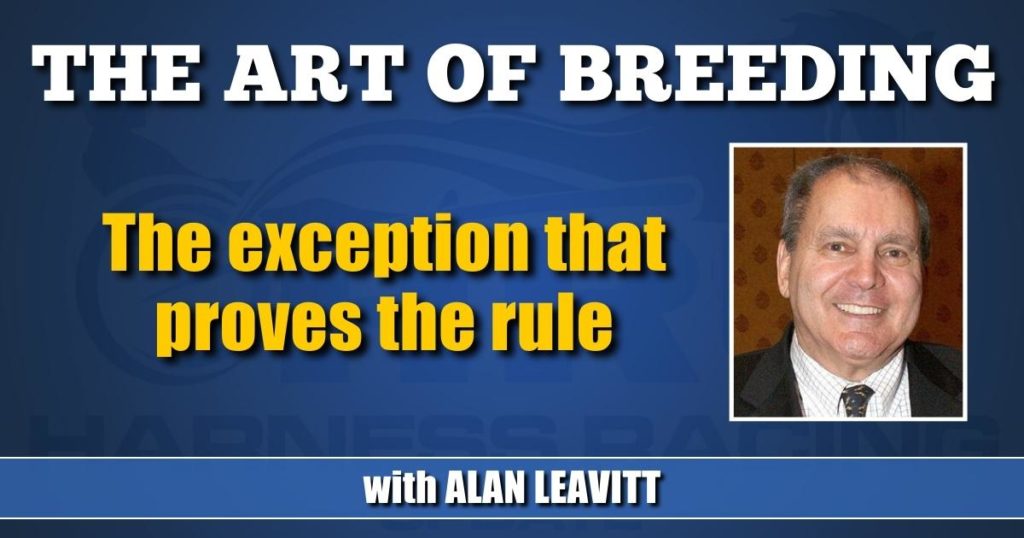 The exception that proves the rule

Joviality S seems to be the exception that proves the rule, in her case the rule that trotting fillies can’t compete successfully against trotting colts.

I can’t say a study of Joviality’s pedigree provides an answer to her exceptional ability, but it does bring up some intriguing points.

First, Jo’s pedigree is 75 per cent strictly American blood, and the 25 per cent of Swedish and French horses quickly runs to “Unknown.” It’s true that her dam, Pasithea Face, has a record of 1:50.4 with earnings of $579,585. That, however, is her Phenotype, or the physical horse, and has nothing to do with her Genotype, or genetic profile, which includes her speed gene and her ability to pass it on.

The best example of her genetic range when it comes to producing fast offspring is to imagine it as a deck of playing cards, with a low card of Two and a high card of Ace.

Somewhere within that deck of genetic cards is each dam’s speed gene, and the same for every sire. What Pasithea’s speed gene card is, unfortunately, unknowable, at least to me, because I can’t find any record of her production, other than Joviality S.

What her extended pedigree does show, however, is the extraordinary affect the late Charlie Keller had on the American Trotter. In Joviality’s third generation, both on the Tail-Male and Tail-Mare sides, are two granddaughters of Yankee Duchess, Ketter’s foundation trotting mare.

Yankee Duchess was a daughter of China L, an exquisitely bred mare of William Reynolds, who was a major player in our business for many years. Delvin Miller was his trainer, and two of his horses were Tar Heel and Solicitor.

Tar Heel went on to be the leading pacing sire of the day at the Hanover Shoe Farms, and Solicitor, later this kid’s first pacing stallion, sired Overtrick. He’s a footnote now, but in his day Overtrick set numerous new world records and won all the major stakes, invariably against another great pacer, Meadow Skipper.

Yankee Windsong and Yankee Blondie are virtual sisters-in-blood maternally. It’s hard, if not impossible, to think of two mares who have done more for our breed than these two.

As for the common belief that great racing performance in a mare foreshadows great products when she becomes a matron, it’s instructive to look at what Yankee Windsong and Yankee Blondie did as race mares.

Yet, as broodmares, those two produced sons who have changed the course of the American trotting breed, and all for the better. Proving that pedigree is all important in evaluating the future potential of a filly or mare, and racing performance is irrelevant.

Now, a quick note about the new track here in Kentucky, Oak Grove. For starters, it’s a lovely name. Beyond that, whether it’s related to the extreme heat at the moment, which I hope it isn’t, there’s no dragging.

The horses post parade, take one score, and then off they go. While the handle isn’t exactly being counted in millions, it’s every bit as good as it would be if they made a joke out of “Zero minutes to post time.”

I know I’m a voice howling in the wilderness here, but it is foolish to think our business can continue to operate with a blatant lie built into our betting program.

We’ve lost Pompano because a casino company persuaded the Florida legislature to decouple their side of the equation from the track’s side. How long can it be before other casino operators in other states decide to make the same argument to their legislatures?

And when they do, what better argument to hang their hats on than the obvious fact that we don’t even respect the truth that our clocks tell us? Again, in the biggest betting race in the world, the Kentucky Derby, when the clock hits “Zero minutes to post time,” the horses are being loaded into the starting gate.

Like the Pennsylvania Dutch of my youth would say; Too soon old, too late smart.